Antoine and Samantha Joseph are investing everything they have and crowdsourcing help to renovate the Philadelphia Sunday Sun building into a black cultural space, as new residents flock to Mt. Airy. 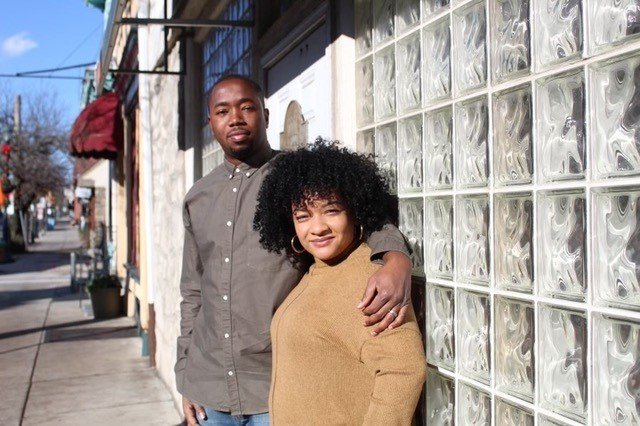 Antoine and Samantha Joseph have big plans for the former headquarters of the Philadelphia Sunday Sun.
Posted Thursday, February 11, 2021 10:45 am
by Patrick Cobbs

Antoine and Samantha Joseph are investing everything they have and crowdsourcing help to renovate the Philadelphia Sunday Sun building at 6661-63 Germantown Ave. into a black cultural space, as new residents flock to Mt. Airy.

“I feel like new people just see the building as an eyesore,” Samantha said.

The two-story twins, now unoccupied, had been owned by J. Whyatt Mondesire, who was the founder of the African American-centered Sun, and the longtime leader of the Philadelphia NAACP. The buildings had been the paper’s headquarters for years and the awning in front still bears its name.

No sign marks the block for Mondesire, but “progress” has made its mark on the block. Montgomery County-based Main Street Development is building its second massive four-story building directly across the street, bringing its total number of new luxury units on that block to more than 100.

By contrast, the Josephs plan to buy the Sun property and keep the buildings intact. They will renovate the top floor into two affordably priced rentals and convert the first floor to commercial space, part of which will be community-oriented and will feature a monument to Mondesire or to black history and culture more generally.

“We are anticipating an influx of people who are not from this neighborhood potentially, and who need to know about the neighborhood,” Samantha explained. “So we’re hoping this can be saying, ‘you are more than welcome to be a part of the community that you moved to, and here is some history of who we are and how you can be really integrated here and not just be gentrifiers, or displace people, or change our culture.’”

The Josephs are not alone in these concerns. Neighbors in East Mt. Airy recently opposed a 37-unit apartment building at the corner of Pleasant Playground, in large part, over worries about the influx of so many new residents. And the Mt. Airy CDC, a non-profit with a mission to “preserve, empower, and enrich a vibrant and diverse Mt. Airy,” plans a building with affordable rents right next door to the Sun building because, they say, affordable housing is becoming critical to maintaining Mt. Airy’s signature diversity in the face of rapid development.

“All of that [profit-driven development] is targeted to an upper-middle- and upper-income client base,” said Brad Copeland, the CDC’s executive director. “And that doesn’t seem to be slowing down.”

Antoine and Samantha Joseph want the Sun building to fight this trend too.

Antoine is an engineer and a real estate agent, who grew up in the neighborhood and knew the Mondesire family. Samantha is a PhD candidate at Drexel and a community health researcher. She grew up in the Bronx but moved to Mt. Airy with Antoine and fell in love with it.

Before the Sun building came into their lives, the couple, both 34, had already begun work in real estate. They own their own home and another, which they rent out. Samantha studies the impacts of gentrification for a West Philadelphia non-profit. Antoine completed the Jumpstart Germantown training program for self-start developers, a non-profit created by Mt. Airy developer Ken Weinstein.

Things were running smoothly for them until, last summer, when the massive Main Street Development project started. Suddenly, Mondesire’s old haunt seemed caught in the path of a storm, and they felt they had to act.

But since the building is in a commercial district, their move to preserve it didn’t only mean they were preserving an important piece of local history, or providing a step toward housing equity, or safeguarding a black cultural space in the face of likely demographic shifts. Merely by stepping into commercial real estate for the first time, they were bucking a norm of inequity all its own. Commercial real estate development is notoriously hard to break into and is overwhelmingly white.

“There have been many times I’ve been in rooms with other developers that are 95 percent white male,” said Weinstein. “I’m glad that Antoine and Samantha are jumping on board.”

Weinstein created Jumpstart Germantown six years ago to share the lessons he’d learned over decades of real estate development with people who otherwise might have little access to them. Since then, more than 1,000 people have graduated, a large majority of whom have been women or people of color, and, with help from funders like The Redevelopment Fund, Jumpstart has provided more that $25 million in loans and expanded into six other neighborhoods.

Weinstein sees greater diversity among developers as a key to equitable development. But there is a bottleneck — one the Josephs know all too well.

“Banks don’t want to lend to new developers,” Weinstein said. “They want their borrowers to have experience. And if people don’t have the knowledge and the financial resources, they will never be able to break into real estate development as a career.”

That goes double for commercial real estate development because of its higher risks, higher expense, and greater complications.

“We had a problem finding [a] lender because of that,” Antoine explained. “They were like, ‘you don’t have experience. We’re not going to lend to a rookie in the middle of a pandemic on a commercial building.’”

“It’s really not designed for folks who are wanting to do what we want to do,” Samantha said. “You have to be in the game already.”

Not even Jumpstart has yet been able to offer loans for new developers entering the commercial side of real estate development. (Though a commercial-focused Jumpstart 2.0 is planned for early post-pandemic timing.)

So the Josephs have had to resort to risky short-term financing, family love, and crowdsourcing to fund their $225,000 construction budget. That’s after the purchase of the building, which was listed at $350,000.

They have poured everything into the project, and family and friends have all contributed too. Nancy and Luis Torres, Samantha’s parents, even followed her to the area, settled in the neighborhood, and have emptied their savings and dipped into their own retirement accounts to help. And, so far, the $82,000 GoFundMe campaign Antoine and Samantha launched in November has raised more than $11,000.

Both of them know, on paper, this project may look onerous. The risk is high, and the profit margins thin. Still, they are convinced.

Germantown Avenue is booming, after all. Values should rise. More than that, “we’re helping our own community and our neighbors that we know are invested in this community,” Samantha said.

“You can’t put a value or a number on community impact,” Antoine added.

Nancy Torres just beamed. “Everything they’ve done and tried to do, it gives me a lot of hope and faith, and they make me feel so good,” she said. “I’m so proud. I hope they accomplish so much.”

Lately, each day has begun and ended with work on the Sun building, but Antoine and Samantha say the intensity only gets them more excited. And the donations they’ve been getting online are a special boost.

When they finish the project and open the community space downstairs, they plan to host a thank-you party for everyone who helped.

“Some of the people know us from college, or from work,” Samantha explained. “But a lot of the donations are just people who are like ‘wow this is great!’ And we don’t know them. They’re sending us nice comments, and I’m just really excited to show them this is what you helped to do.”

Celebrating Kwanzaa’s principles at Center in the Park