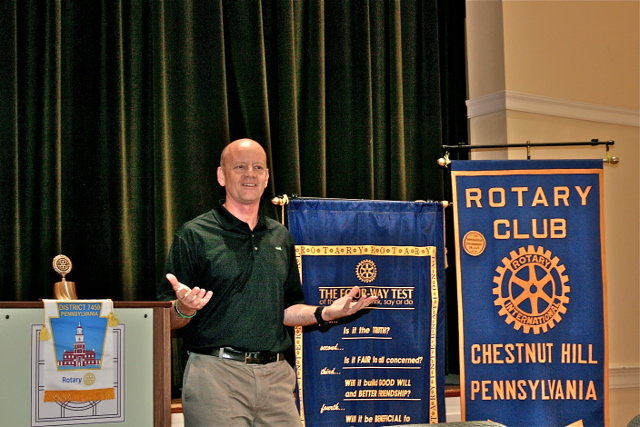 Kevin Nolan, president and founder of Nolan Painting, Southeastern Pennsylvania’s largest family-owned residential painting company, and a philanthropist for many charities, addressed members of the Chestnut Hill Rotary Club on June 8 at the Presbyterian Church of Chestnut Hill.[/caption]

Kevin Nolan, president and founder of Nolan Painting, Southeastern Pennsylvania’s largest family-owned residential painting company and a philanthropist for many charities, spoke to 40+ members of the Chestnut Hill Rotary Club June 8 at the Presbyterian Church of Chestnut Hill, 8855 Germantown Ave.

Nolan, who started his company 35 years ago while still a student at Villanova University (“I was a poor student but a good businessman”), spoke passionately about attaining happiness, achieving success and managing change but not being so preoccupied with money that you don't share what you have with those who are not so fortunate.

“Philanthropy is a big part of what we do,” Nolan said later in an interview with the Local. “I teach my children and employees to bring value to everything they do. The community is the source of our business, so we should give value to the community.”

Nolan has a great reputation for the highest quality work, which can be easily checked on the internet, and they also donate $100,000 of their revenue each year to schools, organizations that fight cancer and environmental causes. All in all, Nolan has donated more than $1 million to these causes, and the company's goal is to donate another $1 million over the next 10 years.

In addition to his business knowledge, Nolan told Rotary Club members what kind of determination and laser-beam focus it takes to run a marathon in each of the 50 states. Despite the time and energy it obviously takes to run a huge business with over 100 employees, Nolan has managed to spend countless hours traveling and training as a long-distance runner. In fact, he has run 60 marathons in 49 states, and in October, after running more than 26 miles in Rhode Island, he will have run a marathon in all 50 states. (According to information we found on the internet, there are actually 36 other people who have run a marathon in each of the 50 states.)

Interestingly, Nolan, 56 never ran in high school or college but started jogging when he was 30. When he was 37, he started running marathons. His slowest was in North Dakota, four hours and 53 minutes in 2014 in 88 degree heat. His fastest was 3:19 in St. George, Utah, in 1999. (That is less than eight minutes per mile!)

Back then Nolan was trying to qualify for the Boston Marathon, which he ended up running four times. He also ran the Philadelphia Marathon four times, as well as Steamtown in Scranton, New York and Chicago two times and even Dublin, Ireland.

“The last few years I have focused solely on hitting the 50-state goal,” he said. “It has been a lot of fun, and I will miss it, but I am relieved to be wrapping it up. I was obviously much faster when I did a marathon or two a year. Slower marathons mean more time suffering.”

In 2014, Nolan ran marathons in eight states, his busiest year. “Running lots of marathons and age have slowed me down,” he said, “plus my goal changed from trying to hit a specific time to just finishing healthy. Most marathons I flew into the specific town and ran the marathon and flew home the same weekend. About half I did with family or friends.

“I just did Casper, Wyoming, on June 5. My two sons and two brothers accompanied me and ran a half-marathon. I will complete the quest in Newport, Rhode Island, on Oct. 9 with 50-plus family and friends running the half-marathon and waiting for me to finish the full one. I have a big party planned at a restaurant near the finish. My mantra is 'Kevin Nolan always hits his goals.'"

Nolan grew up in Huntington, Long Island, and went to John Glenn High School. He graduated from Villanova in 1981 with a degree in Liberal Arts. His dad, now 89, is a lawyer. His mom, now 90, raised seven children. “I started painting because it seemed like a better way to make money,” said Nolan. “I don't like working alone, so I immediately started hiring fellow students. I never saw myself as a craftsperson; rather, I had a knack for business. After I graduated, I continued. It's all I have ever done.”

Nolan Painting has grown slowly over the years. They now have over 100 employees who are offered health insurance, a retirement plan, paid time off and paid training. People have made a career at Nolan Painting. Some have worked there for 10, 20 and even 30 years.

In recent years Kevin's daughter Colleen, and two sons, Kevin and Christopher, have joined the company. Kevin also has a son-in-law, two brothers-in-law and a niece-in-law in the business, and his only other child, Claire, works part-time as the community service manager. “So we are legitimately a family business,” said Kevin, who lives with his wife of 35 years, Mary Fran, in Glen Mills (where they don’t watch TV).

“Our average job is about $4,000. Our biggest paint  jobs have been in the $250,000 range. That usually would involve the inside and out of a very large house. The hardest things I have ever had to do were layoffs and firings. The recession of 2009 was devastating, and I will never forget how it felt to lay off 50 people in a matter of a few weeks in late 2008.”

More information about the company can be found at www.nolanpainting.com

Didinger details all there is to know about Philly sports

Pastorius Park needs your help to restore, improve park
I am writing to ask for your help in restoring the plantings of our beloved Pastorius Park. Over the years, with little from the City, Friends of Pastorius Park has stepped up to clean, repair and …

Prolific Mt. Airy author (25 books) keeps them coming
Alex London, 41, a resident of Mt. Airy (“I love this community”), surely has to be one of the most prolific authors in the Philadelphia area (or anywhere else).

Didinger details all there is to know about Philly sports
Ray Didinger starts out his new book with a Q & A he gave “in the activities room at the Chestnut Hill Presbyterian Church.” Why would a local church invite a sportswriter to address their congregation?