Mt. Airy Business Improvement District is responsible for more than two miles of Germantown Avenue, from Cresheim Valley Road to Washington Lane. Starting at Washington Lane, Germantown United CDC takes over for the next few miles. 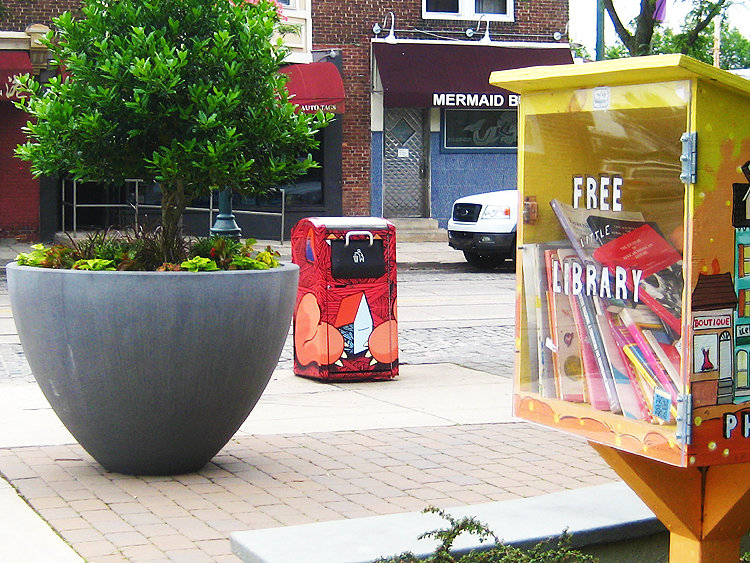 The park at Germantown and Pelham, next to Malelani’s Café, was created in 2018. There are five pocket parks in Mt. Airy, with a sixth opening this summer in the 7100 block. (Photo by Walt Maguire) 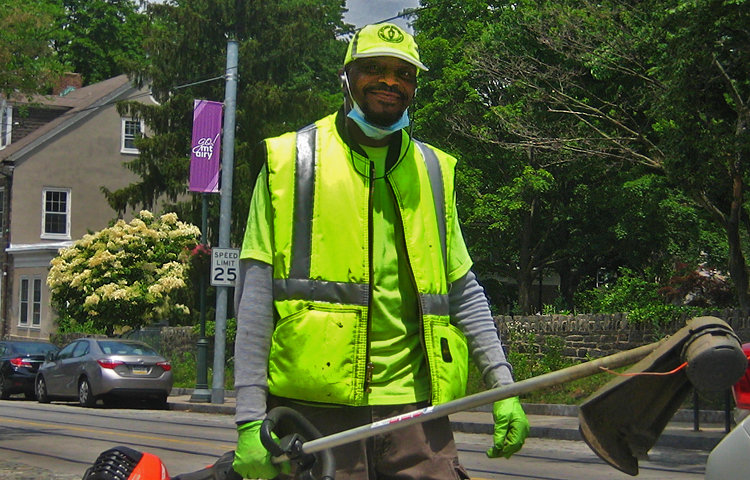 Cookie Bundy handles the landscape maintenance for the Mt. Airy Business District. Behind him is one of the many trees he’s planted on a two-mile stretch of Germantown Avenue. (Photo by Walt Maguire) 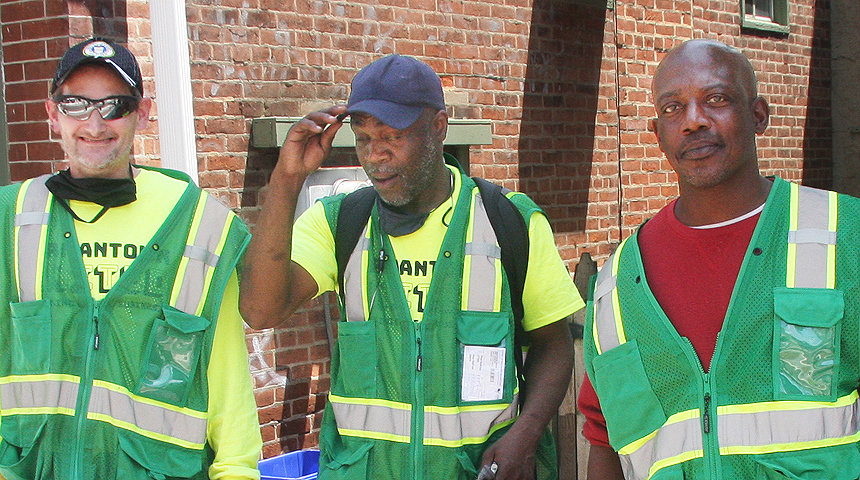 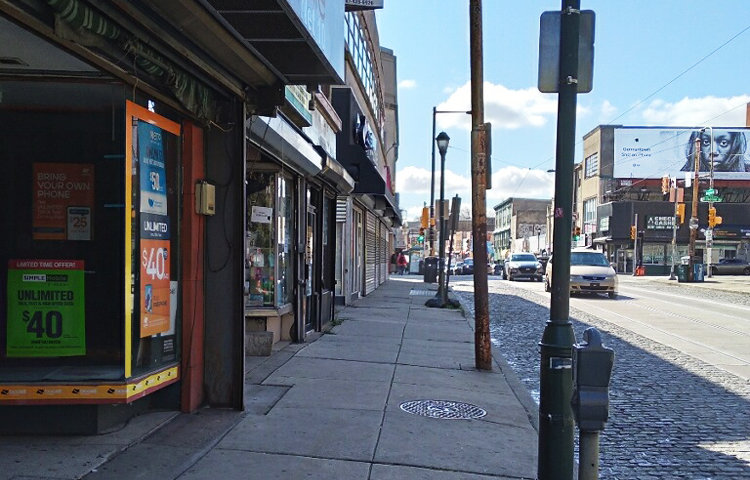 In August of 2020, Philadelphia Department of Commerce started PHL Taking Care of Business (TCB) to clean a target group of business corridors such as Germantown and Chelten Avenues. (Photo by Joe Ruba)
Previous Next
Posted Friday, June 11, 2021 10:25 am
by Walt Maguire

Germantown Avenue runs through Chestnut Hill for about a mile, from Cresheim Valley Road to Chestnut Hill Avenue at the top of the Hill. Including two miles for Mt. Airy and the next mile into Germantown, there are three Business Improvement Districts (BIDs) that keep the Avenue attractive.

Like Chestnut Hill, the BID has landscaped their two-mile stretch of the avenue with lamppost flower baskets, about 90 of them. There’s a series of five “pocket” parks, with a sixth coming later in the summer at 7100 Germantown.

Janis Risch, Executive Director of the Mt. Airy BID, said they employ two full-time Cleaning Ambassadors, who collect eight bags of trash a day, five days a week, or 100,000 gallons of trash a year. Some of this is natural, such as clearing leaves and whacking weeds in pavement cracks. They also clear graffiti from parking meters, trash bins or newspaper honor boxes.

“No one notices when it’s clean,” Risch said. “They notice when it’s not.”

The BID has planted trees, and the Morris Arboretum is currently taking an inventory to see if the district qualifies for a grant from the Pennsylvania Department of Community and Economic Development for more; Risch said there was the potential for an additional 65 (though some would be replacements). In 2019 the neighborhood’s pocket parks were recognized by the Pennsylvania Horticultural Society as “top in its class for neighborhood gardens.”

Their landscape specialist, Cookie Bundy, has personally planted many of the trees. He checks the parks, the hanging baskets, and his trees along the corridor. Like the Cleaning Ambassadors, he prefers to work quietly, starting at 6 a.m. and finishing early in the afternoon, before the sun gets too high.

Another project of the BID is to improve the pedestrian experience. Some sections of Germantown Avenue in this area are long blocks with long distances between corners. They’d like to fix that, to increase foot traffic for shopping. They plan seven additional crosswalks, with new curb cuts to increase wheelchair accessibility, and some curb bump-outs, which help make people more visible at crossings.

The Mt. Airy BID annual operating costs are around $216,000, though some of the maintenance and landscaping is contributed by the local businesses.

Starting at Washington Lane, just past Freedom Park and the Johnson House Historic Site, Germantown United CDC takes over for the next few miles in the central Germantown Commercial District. The GUCDC had never operated a cleaning program, but things changed last year. In 2019, the Germantown Special Services District was voted out of existence by local commercial property owners. Neighborhood groups tried to step up. Jordan Ferrarini’s Trades for a Difference bought a trash truck and organized volunteers. SoLo/Germantown Civic Association (RCO) started a program in their neighborhood. Mathew George started I ♥ Thy Hood, distributing trash cans and collecting the full trashbags himself. In August of 2020, Philadelphia Department of Commerce awarded the GUCDC $153,000 per annum to participate in PHL Taking Care of Business (TCB), a new program to clean streets along a target group of business corridors.

Unlike the other BID Cleaning Ambassadors, the Germantown crew wants to be seen. They take the “ambassador” aspect seriously.

Robert Somerville, of the City’s Office of Neighborhood Economic Development, advocates this. “Sometimes when you see places that have litter, it feels like they’re being neglected,” he said. “When you get guys out there in a uniform, talking to businesses every day, it creates the understanding that the city is not apathetic towards what’s going on in certain corridors.”

Emaleigh Doley, Executive Director of the GUCDC, said this was a new field for the CDC. “There are some organizations citywide that are in the same boat as us, but a lot of organizations that are in the TCB cleaning program were already doing cleaning and the funding allowed them to expand their services. Essentially, for us, it was a brand new operation.”

GUCDC contracted with DePaul USA, a local non-profit that trains the homeless. Their Cleaning Ambassadors are Joe Juba and Joseph (Mack) McFadden from the Whosoever Gospel Mission, and Cubbrien (Cub) Smith, a graduate of Depaul House described as “a trained cook who is happy to be working in the heat but out of the kitchen for a change.” Cub likes to display his vaccination card on his work vest, so passers-by feel safe when they see him tending the trees. Joe shared before-and-after pictures of their work. Mack had been doing solitary work for years, primarily taking care of his parents, and is very conscious of the community reaction when they’re seen on the street. “We’re appreciated,” he said. “That’s all I needed.”

Denis Murphy, the ONED’s Senior Director for Corridor Improvements, views the TCB as a way to show the city government’s interest in a community. ““They’re in uniforms so people can see what they’re doing, and people can build these relationships. And hopefully we can start to change how these areas look, and how people experience them when they go there.”

Murphy referred to a point made by Councilwoman Cherelle Parker. “It’s not just giving people a broom and saying ‘Hey go clean up that mess’ but it’s describing their role as being Cleaning Ambassadors. So they’re connections to the community. They’re there to talk about the goals of the program.”

The contract is up for renewal in June. “As we would enter into the second year, and the first summer, we are continuing to adapt the program,” said Doley. They maintain new gardens at Chelten Bus Stop and Maplewood Mall, so they’ll add a landscaper if they can. She thinks they might be more efficient if they shift some cleaning to cover weekends, when more people are out, and identifying nuisance businesses and heavy traffic spots. “If you were to talk with our crew, the more you clean, then the more a problem stands out. And it definitely is cleaner.”

Germantown church may be demolished

The saving of Abolition Hall: A case study