Billy Penn, Philadelphia’s online news site, had an interesting story last week about a resident of Germantown who decided to take the matter of neighborhood litter in his own hands by purchasing … 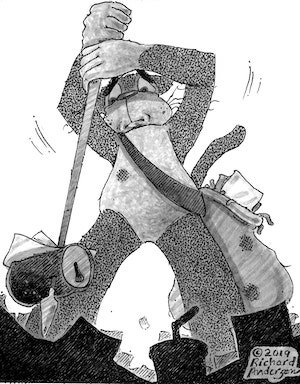 Billy Penn, Philadelphia’s online news site, had an interesting story last week about a resident of Germantown who decided to take the matter of neighborhood litter in his own hands by purchasing his own trash truck.

Jordan Ferrarini, who operates a nonprofit called Trades for a Difference, decided the only way to make a dent in the neighborhood’s persistent trash problem was to do it himself. The issue, he said, was too important to leave to a city that wasn’t able to take care of it.

“The trash in Germantown, it’s a major problem,” Ferrarini told Billy Penn’s Michaela Winberg. “It affects a bunch of different dynamics: violence, blight, hopelessness, young people feeling good about themselves in the community.”

Research backs up Ferrarini’s assertion. In a series on trash in the city by the Philadelphia Inquirer last year, studies were gathered showing that littered streets negatively impact physical and mental well-being, attract crime and reduce property values.

Given those impacts, it makes you wonder why the city would not invest more in cleaning the streets.

Mayor Kenney had pledged to restore street sweeping in his 2015 election bid, but nothing has come of those promises so far.

Germantown’s situation should give Chestnut Hill residents something for which to be grateful. The neighborhood is one of the least littered in the city and much of that has to do with efforts not only by the Chestnut Hill Business District, but also of many volunteer groups and individual citizens who will pitch in by picking up trash, making sure it isn’t left on the street. The Friends of the Wissahickon often do the same for the park.

The same can be said for much of Northwest Philadelphia, which has consistently low litter levels according to regular city reports.

The problem is that when litter is left to private enterprise, volunteers and business corridors, the cleanest neighborhoods will tend to be those with the most resources. That’s admirable for Chestnut Hill, but it lets the city off the hook for putting in the time and money in cleaning streets where it’s needed the most.

With an annual budget of $3.7 billion, a $12 million purchase of equipment and $5.2 million a year is a small price to pay, particularly when the benefits to picking up the trash are much greater than clean streets.

Our policies for letters and guest opinions