The Mt. Airy activist for social justice relaxes with her children — Laila, 14, Bilal, 12, and Ismail, 14 months — at the recent opening reception for the 61st Young Artists 2017 City-Wide … 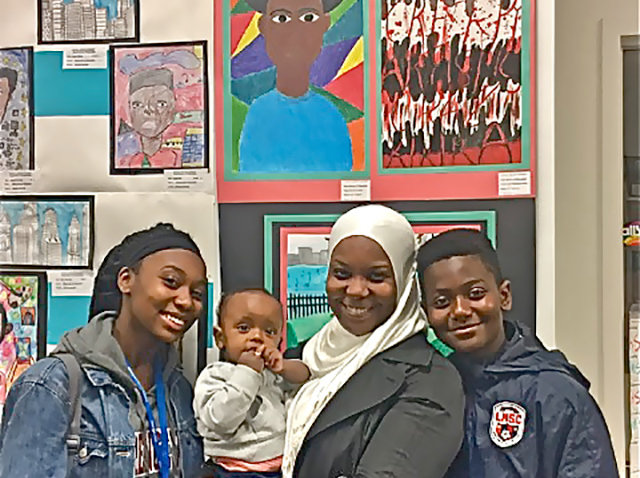 The Mt. Airy activist for social justice relaxes with her children — Laila, 14, Bilal, 12, and Ismail, 14 months — at the recent opening reception for the 61st Young Artists 2017 City-Wide Exhibition. Bilal's piece is in the exhibit and pictured above the baby's head (sketch of black boy with a blue shirt).[/caption]

When hearing details of the life story of Kameelah Mu’Min Rashad, 39-year-old Mt. Airy resident and mother of three, it’s easy to feel somehow less-than. She has done so much in a relatively short time, one might wonder how — and why — others don’t do the same?

And yet, that is the last thing Rashad wants anyone to do. She is the first to build up those around her and support them in myriad ways and the first to point out that she does not operate in a vacuum, that there are many others out there working for their principles and to help lift others up.

Currently in the fourth year of Chestnut Hill College’s Doctor of Psychology (Psy.D.) program, Rashad already has earned several degrees and made a positive impact on the world. She has a strong reputation as a social justice advocate, especially within the American Muslim community.

“None of this is something I think only a certain kind of person can do,” says Rashad. “I always encourage people to think about who they impact on a daily basis … what are my opportunities to change or be effective? You never know what kind of impact you can have on a small scale that may have a ripple effect.”

Rashad’s “small scale” was her family and neighborhood, where she discovered issues that were affecting her as well as those around her. Then she identified friends and colleagues who shared her beliefs and would work alongside her to make their corner of the world a better place. The ripples are still spreading. “I’m not a lone crusader. There are many who are as committed. I found others, and it doesn’t feel overwhelming.”

“As an African-American Muslim woman with multiple roles as a student, wife, mother, clinician, consultant, lecturer and founder and president of her own non-profit, Kameelah juggles all of her responsibilities with great acumen, grace and profound dedication,” says Cheryl Rothery, associate professor of psychology and Rashad’s dissertation chair at CHC. “It is a privilege to be part of her professional journey.”

As the founder of the nonprofit Muslim Wellness Foundation in Germantown, Rashad works to reduce the stigma associated with mental illness, addiction and trauma in the American Muslim community through education, training and dialogue.

“There are great differences between a Muslim family who has experienced forced migration and one living in an urban city, for example,” she says. “We need to ensure our activities are culturally competent and resonate spiritually. We need people to feel empowered and know they can access the resources they need.”

Rashad also serves as a resource to the University of Pennsylvania community as the Muslim Chaplain Emeritus. She continues to integrate the various aspects of her work at Penn, where the conversation around faith-based activism, wellness and mental health began long before November’s election, the results of which have caused a lot of stress in her community.

One of Rashad’s motivating factors is her 8th-grade daughter, whose fears and misperceptions over political events led her mom to found another organization, Muslims Make It Plain. This coalition of Muslims works at the grassroots level to address police brutality, racial and religious profiling and other discriminatory actions. In 2014, the group led the first Muslim rally and march in the country in support of the Black Lives Matter movement.

The Third Annual Black Muslim Psychology Conference, organized by Rashad, will be held (for the second year) at SugarLoaf’s Commonwealth Chateau in July. Last year more than 125 attendees forged a space where they were free to explore the experience of being black and Muslim in the U.S. today.

Rashad is a 2014 Ariane de Rothschild Fellow and recipient of the 2014 Student Multiculturalism and Education awards from the American Psychological Association and of the 2015 Mental Health First Aid Community Impact Award. In February, 2015, she was one of 14 American Muslim leaders who attended a roundtable discussion with President Obama and other senior officials at the White House. At that meeting, Rashad shared her concerns regarding the psychological impact of anti-Muslim bigotry on the Muslim community.

Prior to enrolling at CHC, Rashad, who was born and reared in Brooklyn, N.Y., earned her bachelor’s degree in Psychology and a M.Ed. in Psychological Services from the University of Pennsylvania. She earned a second master’s degree in Restorative Practices and Youth Counseling from the International Institute for Restorative Practices and a post-master’s certificate in Family Therapy from the Philadelphia Child and Family Therapy Training Center. She has one year left in the Psy.D. program, followed by a one-year internship.

Reprinted, with permission, from the spring issue of the Chestnut Hill College Magazine. For more information: www.muslimwellness.com or 267-455-4357.