For Jill Zipin, a Montgomery County resident who purchased a sign, the “Hate Has No Home Here” movement “says to Trump and his supporters that we reject your campaign of division and … 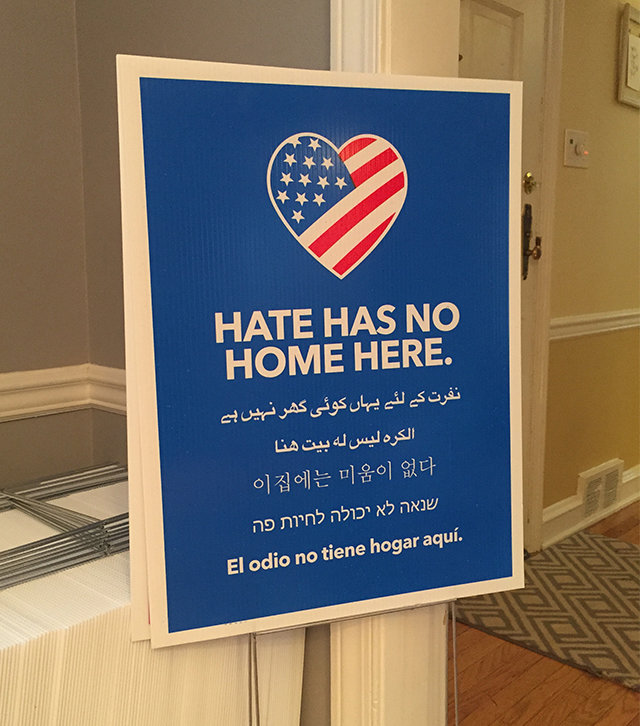 For Jill Zipin, a Montgomery County resident who purchased a sign, the “Hate Has No Home Here” movement “says to Trump and his supporters that we reject your campaign of division and intolerance.”[/caption]

Inspired to make a change following the 2016 election, a group of Glenside community members are working together to show that “hate has no home” in their neighborhood. The group has developed, marketed and distributed signs throughout Philadelphia and surrounding areas that leverage artwork created by Steven Luce.

The artwork is based on a powerful statement made by two elementary school students in the diverse, suburban Chicago neighborhood of North Park that “Hate Has No Home Here.” The signs feature the message in English, Arabic, Hebrew, Korean and Spanish and are non-partisan by nature; they are printed in red on one side and blue on the other.

Kate Thomson, a marketing consultant with two young children living in Glenside, has been the driving force behind the sign distribution. “I was both heartbroken and incredibly energized by the election and the events that have unfolded since,” said Thomson last week.

“I needed to find more ways to clarify that my family and I actively denounce hate-fueled language, actions or beliefs… that we stand united with neighbors who espouse similar values and are offering support to others who need us. It really doesn’t matter how I or anyone else voted: the signs are about upholding tenets of basic human decency. Their presence provokes conversations that we, as families and as a broader community, need to be having.”

After a neighbor offered Thomson a few of the signs, neighbors and friends expressed interest and she decided to undertake another, much larger print run. But it wasn’t until she posted information about the local campaign to the former BuxMont chapter of Pantsuit Nation that she saw a sudden and dramatic demand for the signs.

Within the first 48 hours, more than 600 signs were ordered. Those signs now adorn lawns in Glenside and in other neighborhoods in Bucks, Philadelphia and Montgomery Counties. A second wave of signs is slated to arrive in time for Martin Luther King, Jr. Day on Jan. 16 and the Presidential Inauguration on Jan. 20.

Weavers Way Co-op, a community owned grocery store, will be distributing the signs in their Mt. Airy and Chestnut Hill stores. Jon Roesser, General Manager, was eager to support a positive local initiative like this. "After a divisive year, we are looking forward to 2017 at the Co-op, where we can reaffirm our commitment to a welcoming culture that values diversity and respect." said Roesser.

“I hope people who most need to receive this message, those who are most frightened of our current state of affairs, will see the signs and be reminded that not everyone is against them, that there are tolerant people living amongst us,” said Thomson.

Full information on the campaign is available at its Facebook page, www.facebook.com/hatehasnohomehereglenside. Presently, signs are available for pick-up only. The cost is $7 per sign or $50 for 10 signs.

Deadline for orders is Dec. 30.

According to the Facebook page, “In addition to 700 signs on local lawns, we had some other great results from Batch 1: surplus funds donated to Southern Poverty Law Center and a huge donation of goods to The Narenj Tree, a local organization that ships support from Norristown to Syrian refugees. So impressed with our neighbors and friends.”

According to a Dec. 16 article in The Philadelphia Jewish Voice by Jodi Benjamin, who has also written for the Local, “Jill Zipin, a Montgomery County resident who purchased a sign, supported Thomson’s efforts by further circulating her post on social media. Zipin is a vice president of JSPAN (Jewish Social Policy Action Network) and a founding member of Democratic Jewish Outreach Pennsylvania.

“For her, the ‘Hate Has No Home Here’ movement ‘says to Trump and his supporters that we reject your campaign of division and intolerance and that America is, and should always be, a melting pot where the immigrant is welcomed and people of all faiths and races are welcomed.’”