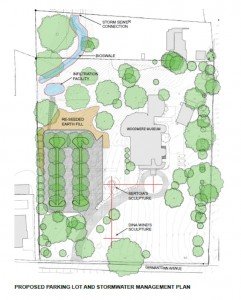 A plan shows the proposed transformation of Woodmere's parking lot.

William Valerio, CEO of the museum, said the purpose of the meeting was to create an open dialogue about the first phase of construction in the museum's master plan dedicated to opening the institution and its grounds to the broader community.

Components of the master plan include updating the museum's entrance, facilities and museum store, expanding storage spaces and galleries to accommodate Woodmere's growing collection of art, re-engineering and restoring historic elements of the landscape including converting a former stable, known as “the ruins” into an education space and creating a world-class outdoor sculpture garden.

Charles Knox Smith, the founder of the Woodmere, was a successful industrialist and a former member of Philadelphia's Common Council (the precursor body to today's City Council), who, according to Woodmere's website, wished “to awaken the spirit of, the appreciation of, and the knowledge of art … in the City of Philadelphia and surrounding territory.”

In a statement announcing the meeting Valerio said, “Woodmere's goal is to open many doors to the future, revitalizing our founder's vision of a great museum that inspires creativity by bringing art and nature together.”

Baird said that having grown up in Chestnut Hill, it was great “to see this fantastic institution vital and growing in interest.”

He discussed the proposed changes to the existing parking lot and explained that the lot would be reconfigured.

“Our sole project was to recreate the same number of spaces that exist in the parking lot now, but to do so in a way that deals with water runoff issues,” he said.

Mark Bowen, a civil engineer and senior project manager at NTM Engineering Inc., discussed the plan to reduce stormwater runoff in detail, adding that “the ject was to catch most of the water from the this facility before it gets down to Hillcrest.”

He said the stormwater management system included a bioswale, which will help catch water and filter out pollutants from rainwater runoff before directing it towards a new storm sewer connection.

“The water will drain and pass the original stormwater facility built in the 1970s in the parking lot,” he said. “It will bypass that facility and catch into a large biospring, which will direct the stormwater to a new connection that we are installing as part of this project.”

Automobiles are the main source of pollutants in parking lot runoff, including antifreeze, oil, hydrocarbons, rubber particles from tires, grease and nitrous oxide from car exhausts.

Besides being more environmentally friendly, the new parking lot design will be more aesthetically appealing.

Baird said the current lighting for the parking lot is very harsh, inefficient and creates a sterile environment. The new design will lower the height of the light poles and reduce LED lights from 48,000 lumens to 26,000 lumens.

He said while he proposed plan would remove 10 trees on the site, it will plant 14 more hardy trees such as white pine or sycamore trees. He added that the green parking lot will still have the same number of parking spaces, but will include room for overflow parking.

The plan also includes creating an area of reinforced grass using a thick plastic mesh that is installed directly onto existing grass. It strengthens grass that is prone to wear, rutting and muddy surfaces.

Valerio recalled having to help patrons push their cars out of a foot of thick mud after heavy rains caused the site to flood.

Baird added that “this is by no means the final plan – it's just to give you an indication of how we are approaching the landscape design conceptually.”

Valerio said both sculptures are larger than any current works on the Woodmere ground and “will be transformative, by virtue of their monumental scale, in creating a dialogue” with the museum's beautiful campus.

“One of the really exciting things that's going to be happening as part of this project is that the city's great Bertoia sculpture “The Free Interpretation of Plant Forms,” [a bronze fountain formerly installed at the Civic Center in West Philadelphia], will be restored and installed at the museum.

Bertoia had a longstanding relationship with this institution, so it seemed fitting that the sculpture,, would be placed here.”

Valerio said he is looking forward to incorporating “a lot of creative thinking about water flow” into the museum's education program and in “context relative to the stewardship of our land on the Wissahickon.”

He added that the museum will also be installing the 30-foot “Spring & Triangle (2016), by Dina Wind. The installation fulfills the late artist's aspiration to realize her sculpture on a monumental public scale. “Spring & Triangle” is designed to interact with the natural environment and will be placed on the museum's front lawn. A public unveiling of the sculpture will be held at 3 p.m. Saturday, June 11, at the museum. A slide presentation by Kurt Wulfmeyer, the fabricator, will describe how he realized the artist’s dream to construct her work on a monumental public scale.

“We are really excited about incorporating this monument into our landscape,”Valerio said. “It's a big part of our long- range plan for Woodmere and our vision to bust Woodmere out of our walls and really integrate the museum's experience across the landscape.”

He said that having these iconic outdoor sculptures at the museum is “a first big step towards making that vision a reality.”

This article was updated on 4/13/16. An earlier version of this article erroneously stated that Baird worked as the assistant director for The Philadelphia Museum of Art before taking the helm at the Woodmere Art Museum. It should have said Valerio. The article also misspelled Charles Knox Smith's name.