Last Tuesday was opening night in the long-running Philadelphia/Suburban Women's Summer Basketball League, which got its start decades ago at Chestnut Hill's own Water Tower Recreation Center. 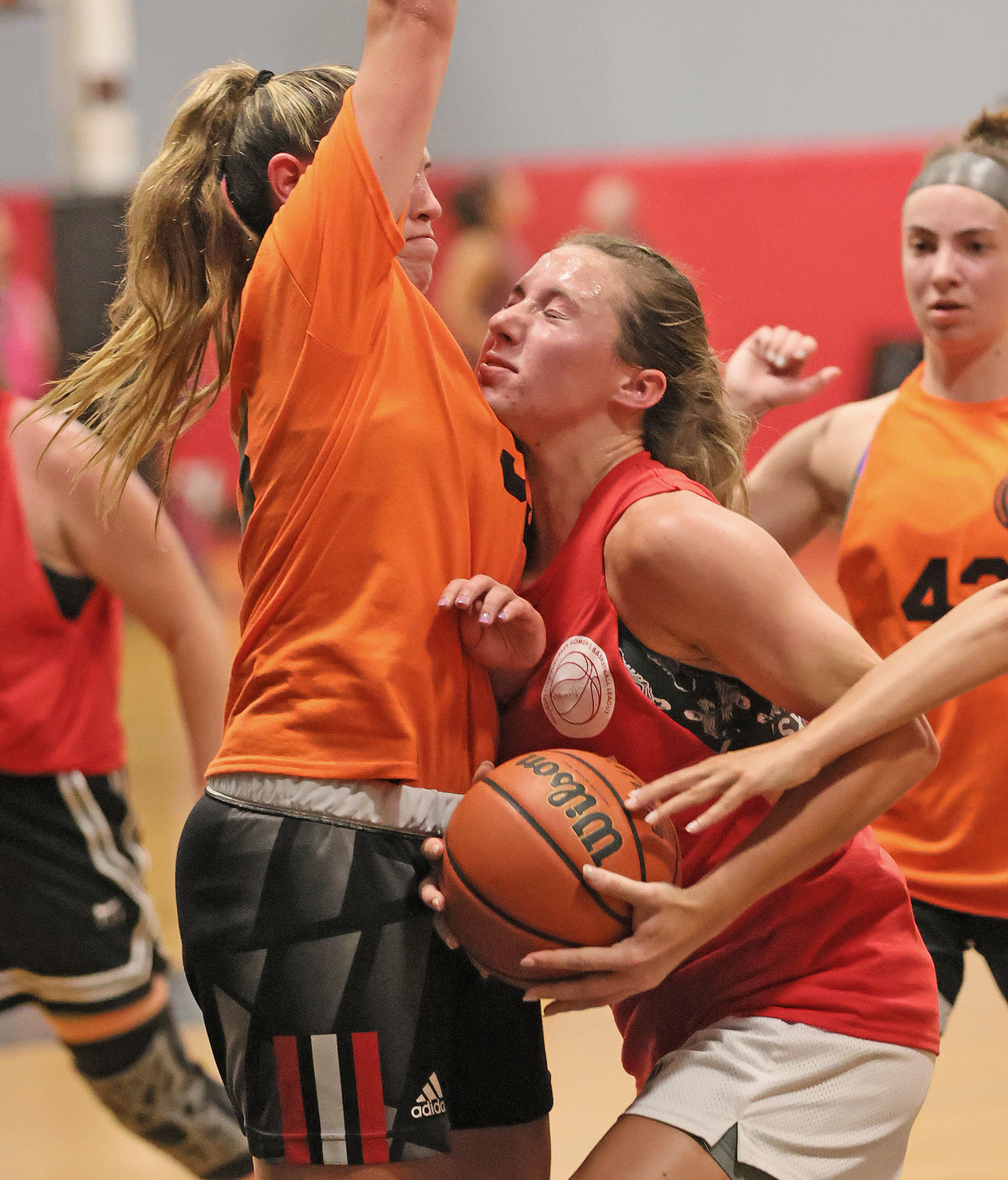 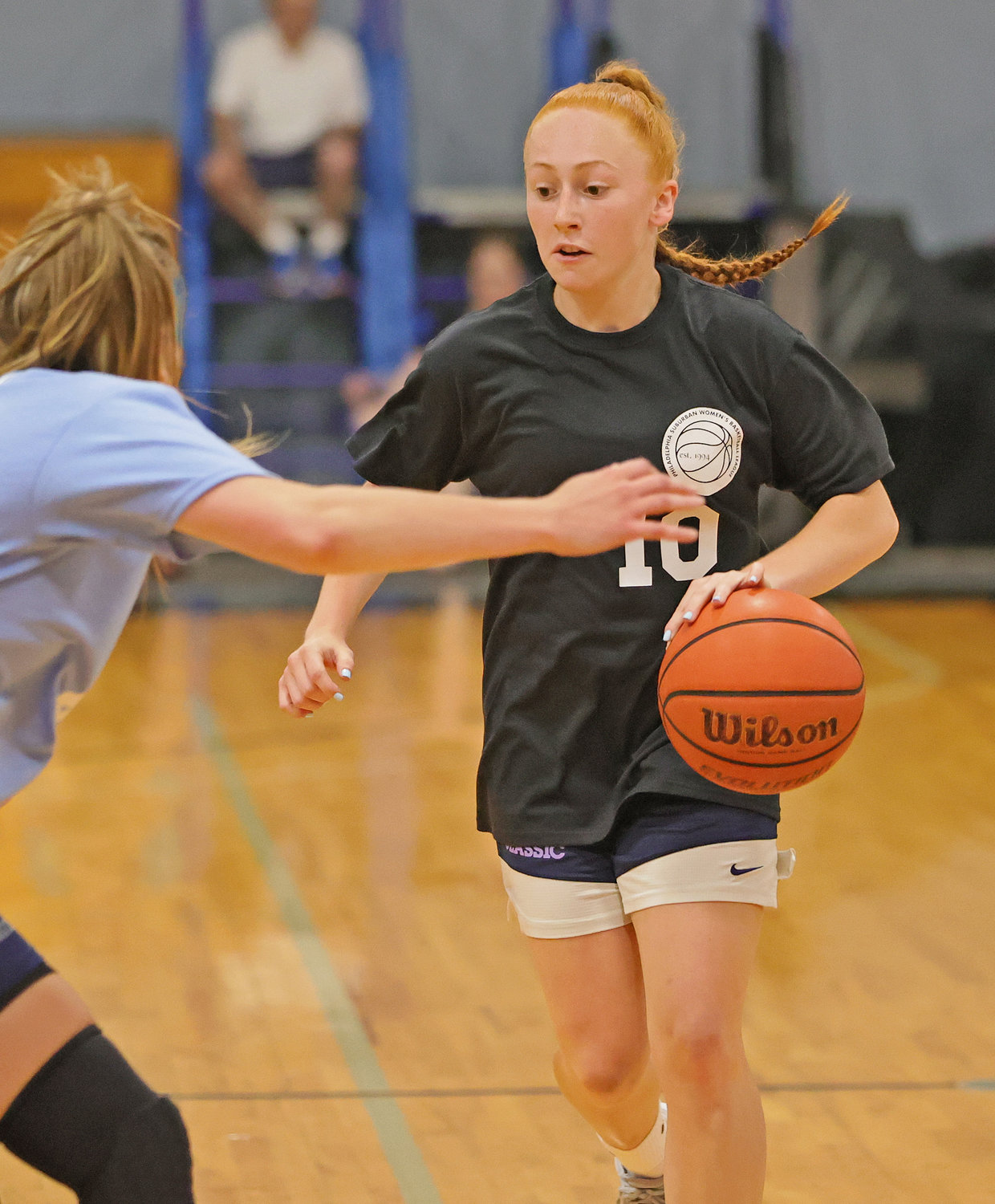 Last Tuesday was opening night in the long-running Philadelphia/Suburban Women's Summer Basketball League, which got its start decades ago at Chestnut Hill's own Water Tower Recreation Center.

University of the Sciences used to be a member of the CACC and played as a unit in the summer league, but USciences has now been absorbed by St. Joseph's University and its intercollegiate athletics program was terminated. The summer league does feature a "Heather Maroon" team made up mostly of USciences alumni, and also on their roster is former Chestnut Hill College point guard Cassie Sebold ('22).

Germantown Academy alums Sarah and Charlotte DiLello (Class of 2020 and 2021, respectively) are playing with their Ursinus College teammates on Team Orange, which includes a few Division III players not from Ursinus. Two other former Patriots appear on two teams put together with players from many different schools. Alexa Naessens, a 2022 graduate of Colgate University, was assigned to Team Kelly Green, and 2020 GA grad Caitlin Priore, now at Gettysburg College, is on Team Sun.

Naessens was the only one of the GA grads who was able to attend Tuesday's session. Her Kelly club made short work of a Royal Blue squad made up mainly of athletes from Division III Arcadia University, 75-34. Naessens scored eight points, while the game-high of 16 belonged to her teammate Dana Bandurick, a rising senior at Swarthmore College.

CHC's Team Red cruised, 76-45, against an Orange outfit that was missing the DiLello sisters. Even though the summer Griffins didn't seem to be firing on all cylinders in the early stages, they led 38-25 at the half and kept pulling away from there.

Rising sophomore post player Emily Chmiel, the CACC's Rookie of the Year last winter, registered a game-high 17 points, while senior shooting guard Lauren Crim and graduate student Bri Hewlett each scored 14. Hewlett, a forward, and point guard Abby Spratt have both completed four years of school at CHC, but are still eligible to play one more year due to the COVID-related cancellation of the 2020-21 basketball season.

A game involving the other two teams from the Central Atlantic Collegiate Conference was much closer, as expected. Team Black, the ladies from Jefferson, held a 17-14 edge at the end of the first quarter, but then Holy Family's Team Columbia Blue surged ahead by scoring the first eight points of the second stanza.

The half ended with a 30-26 advantage for Columbia Blue, which went on to win, 59-53. Haley Meinel, a rising junior in terms of eligibility, led Black with 16 points and sophomore center Cassie Murphy had 14. Another 11 points came from a former Mount St. Joseph foe, freshman guard Tori Nigro, who played for both St. Basil Academy and Villa Joseph Marie.

Thursday evening play featured close games all around. Columbia Blue played the USciences alumni team, Heather Maroon, and the two squads battled into overtime at 54-all. Maroon won 61-59, getting a three-pointer and a lay-up from CHC alum Sebold.

GA grad Naessens scored four points as her Kelly Green club edged Team Sun, 51-50. The former Patriot on Sun's roster, Priore, has had to spend the week with her Gettysburg College team working at a basketball camp on campus.

Sarah and Charlotte DeLello turned out as their Ursinus/Orange engaged in an all-Division III battle with Arcadia/Royal Blue. Royal led for much of this game, and owned a 33-26 advantage at halftime. Orange got within two points of the leaders early in the third quarter, but trailed by as many as 11 later on.

With 11 of her 13 total points coming in the third period, including three three-pointers, Sarah DiLello kept Orange from falling completely out of contention, although Blue led 53-43 at the three-quarter mark.

In the early minutes of the fourth frame Orange reduced its deficit to four points, and it would be a battle the rest of the way. Converting on a put-back, Charlotte DiLello made it a two-point contest at 51-53, and a later on she made one of two free throws to get her team within one point of the leaders, 55-56.

Soon after that, Orange went up by three, then Blue hit a lay-up to get back within one at 59-58 in the final minute. Blue then converted two free throws to edge back ahead, but Orange retook the lead on a drive by Erin Dougherty, who plays for Catholic University. On its last trip down the court on offense, Blue turned the ball over and Orange won, 61-60.

Team Red, Chestnut Hill College, took on Team Pink, which primarily consists of players from Division II Kutztown University. The Griffins were down 10-12 at the quarter, and would've trailed by double digits at halftime if not for a late "three" by Crim that made it 29-20.

The CHC players were impatient on offense and tried to force up shots, often losing possession of the ball. Team Pink moved the ball well on the attack, and several players with a quick first step were able to penetrate to the hoop frequently or free themselves for short jumpers.

CHC's Chmiel scored the first points of the second half off of a rebound, but Pink then climbed to its largest lead of the night, 16 points, with a 9-0 run that made it 38-22.

Later in the third round, though, Pink seemed to tire a bit, going the whole game with only one sub. Chestnut Hill began to play smarter, and thus, better. The summer Griffins had gotten back within four points in the final minute of the period, although a late trey by the Kutztown cadre set the score at 43-36 for the start of the fourth quarter.

With three inside baskets and a free throw, Chmiel led Team Red on a 7-3 spurt at the start of the fourth frame. Lane banked in a sort of running lay-up to put CHC just one point behind, but Red couldn't get over the hump during the next few minutes.

With Team Pink ahead 50-47 with under two minutes left, Crim hit a mid range jump shot, and early in the final minute Chmiel scored on an inside move to nudge Red ahead, 51-50. Pink went back in front on a jumper from the right baseline by Abby Goodrich with half-a-minute to go. On CHC's last possession, Pink was able to step in with a double team to stop a drive toward the basket and create a turnover, winning 52-51.

Chmiel's game-high 16-point performance was supported with nine points from Hewlett and eight from Crim. Carter, who'd scored Team Red's first basket, finished with three points. Team Pink was led by a 14-point effort from Casey Remolde, who used to play for St. Basil's in the Catholic Academies league.