The smoking choir lives up to its reputation. by Hugh Gilmore Relax – 100 kilometers per hour is really only about 65 mph, and I don't believe in white-knuckle driving just to get somewhere, … 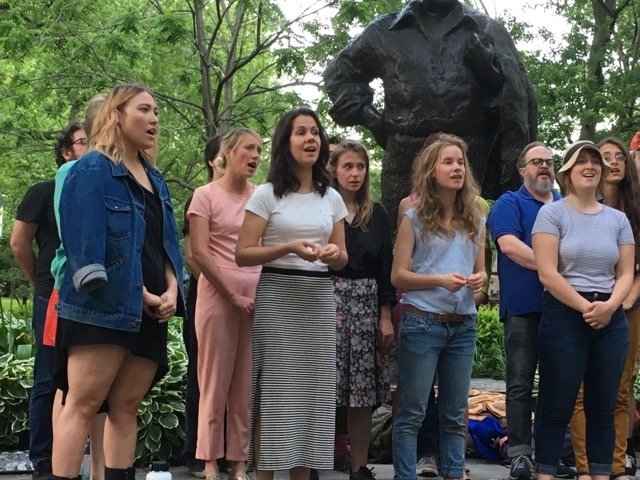 The smoking choir lives up to its reputation.

Relax – 100 kilometers per hour is really only about 65 mph, and I don't believe in white-knuckle driving just to get somewhere, especially a place I've been before.

We made our annual relaxed visit to Montreal last week, and we timed it, as always, to coincide with the summer solstice. That's the day a small group of the hippy-dippy artists, musicians and writers from the Plateau neighborhood come out to hold Slowness Day – "la Journée de la lenteur" – in the Parc Fontaine. The event's avatar is a tortoise, and the message is "Slow down, relax, take time out from the hustle of the modern world."

There are meditation workshops, group hugs, laughter circles and lots of other cotton candy-ish mental exercises. It's all done with a kind of goofy French sincerity that makes it fun to watch. The festival culminates with a beautiful, haunting choral group called "The Smoking Choir," which I always assumed referred to them being smoking hot, as in très cool. Now that recreational marijuana has been legalized, however, I think their name could refer to the event's pervasive aroma.

This year, unlike other years, nobody had to slip behind the monuments to turn their speed dial to slow. We had a good time, but after a while, it's not fun to be straight when everyone else is stoned, so we dissipated out of the fog and back to the B&B across from the park.

Slowness Day happened last Friday, but we had arrived early, on Tuesday, and had time to go to the Canadian Centre for Architecture. Its major show, now running through Oct. 13, is titled "Our Happy Life: Architecture and Well-Being in the Age of Emotional Capitalism." The ideas and visuals on view are both simpler and more complex than all the king's philosophers, social scientists, politicians, economists, ecologists and artists could ever put together.

The simple part begins almost with a slogan: Let's stop thinking of the GNP as the primary measure of the quality of life. (Gross National Product is an estimate of total value of all the final products and services turned out in a given period by the means of production owned by a country's residents.) Instead, let's start trying to measure GNH (Gross National Happiness). The Himalayan country of Bhutan is the modern progenitor of this concept, having incorporated it into its constitution in July 2008. In 2012, the First World Happiness Report was released at a special United Nations meeting about "Well-Being and Happiness."

In Bhutan, there are nine domains of happiness and four pillars of GNH. Elements considered include equitable socioeconomic development, environmental conservation and cultural preservation and promotion. On a more personal level, aspects of human life that must be promoted include physical and psychological health, a sense of community, education, meaningful work and a sense of self-worth.

Since GHP was first proposed, versions of it have been attempted in places as diverse as British Columbia, the Philippines, Brazil and Thailand. As you might expect, lots of politicians in lots of countries and cities have given passionate lip service to the concept, especially when campaigning for election. And, as you also might expect, academic scholars have generated a large amount of research space and time to the task of measuring the quantity of happiness in given populations – some as small as a primary school, others as large as a nation.

Very few people would try to make a case against happiness as a worthwhile state, but the fist fights begin when it's time to measure this state. The primary research tool thus far has been the interview – a historically blunt instrument. (Especially when wielded by newspapers and magazines.) The UN's annual World Happiness Report, for example, is based on a Gallup Poll of citizens from 156 countries. A lot of fascinating reports are generated from that data, including Happiness Indexes ranked by country. The perennially happiest countries are Finland, Norway, Denmark, Iceland and Switzerland. The U.S.' rank in the March 2019 report was 18. The lowest tier was occupied by Syria, Rwanda, Yemen, Tanzania, South Sudan, Central African Republic and Burundi. (The ratings were affected also by GDP per capita, life expectancy, freedom of choice, suspicion of corruption and community support.)

The Centre for Architecture's exhibition showcases a treasure trove of idealized fixes for improving the living conditions, in every respect, of the world's peoples. Some of the schemes, presented in ingeniously clever visual fashions, seem utopian, but are actually being tried all over our blue marble planet.

Perhaps the major takeaway from the exhibition was that the GNP/GHP distinction is real. And that, you guessed it, more money does not guarantee more happiness. Not surprisingly, neither does poverty nor living in a country wrecked by constant war.

That was Tuesday. Wednesday and Thursday were spent doing pleasant touristy things. And then Friday arrived, and we indulged in the pleasure once again of nodding our heads to the soft drums of Slowness Day. For some reason, being a tortoise always beats being a tourist. And it adds to the GHP and GNP.

What others called waste, I played with on Saturdays: How getting down to nuts and bolts helped me lose my mindset