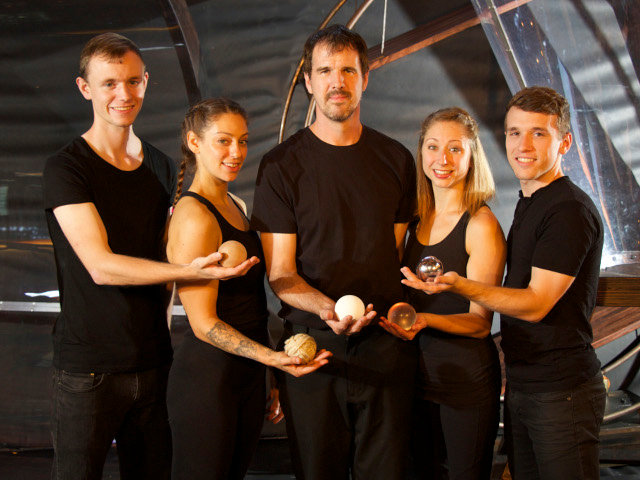 Greg Kennedy may live modestly in Germantown, but the 43-year-old juggler has won a Gold medal at the International Jugglers' Association Championships, appeared on the Tonight Show with Jay Leno, been featured on the cover of Juggler's World and Juggle Magazines, received over two million views on his YouTube videos and performed on five different continents.

After taking “Totem,” a show containing an 8-minute "Scientist Act" that he created, on the road with Cirque du Soleil for the past five years, the Northwest Philly resident is bringing his newest show, “Theorem,” to the Philly Fringe Festival in September.

While on the surface his act appears to be pure showmanship, behind the scenes is a man who designs, plans and builds the apparatus, like a cone big enough to fit a man, or a 12-foot-long horizontal tube that he juggles in or through. He tinkers and experiments and by applying the principles of geometry and physics has created new techniques in what he calls “modern juggling.” He excels at making visual spectacles out of everyday objects.

“Theorem” takes a playful look at the use of modern technology. For his Cirque du Soleil show, Kennedy had created a cone with the wide part rising from the ground, and he would juggle up to seven lighted balls around the surface of the cone as he stood inside it.

In a video on YouTube he looks like a scientist in a neon lab toying with atoms. He was eventually approached by Cirque du Soleil about producing an eight-minute act for their world-renowned show, which he did. He also became a principal character in the Cirque du Soleil show.

Kennedy never expected to make a career of juggling. Raised in northwestern New Jersey, he moved to the Philadelphia area and graduated from high school in Berwyn. He studied engineering at Drexel University and worked in engineering for two-and-a-half years while doing some juggling on the side (“15-minute jobs as a strolling juggler”).

However, when a friend who was a full-time, professional juggler asked Kennedy to join him for a juggling job at a Dutch-owned theme park in Japan, Kennedy took a four-month leave of absence in February, 1997. “It was my first extended job as a professional juggler,” said Greg. “I enjoyed it so much that I never went back to engineering, although I’m using engineering more now (in ‘Theorem’) than when I was an engineer.”

He wound up performing in Atlantic City and other cities, theaters, cruise ships and for corporations. He would build a structure up to 10 feet tall, manipulate and move parts of it around; it was a new kind of juggling.

With a five-person cast and a budget in the tens of thousands, Kennedy says “Theorem” is the largest show he has created. There's white plastic falling from the sky and a 12-foot-long horizontal tube that's big enough for several people to roll various balls through. The show is filled with striking, powerful images and unexpected moments. It includes aerial acrobatics, five-person choreography and an interactive lobby installation.

Kennedy aims to get people thinking about how what he does is possible. How does gravity work that enables him to manipulate the objects in such a way? He's interested in exploring how we live with technology.

After recently licensing the 8-minute "Scientist Act" in “Totem” to Cirque du Soleil, Kennedy moved back to Germantown, where he has lived with his wife Shana, an acrobat, since 2000.

While Kennedy traveled around the world, Cirque du Soleil covered his family's expenses. The family had beautiful apartments in the center of cities, and his three children were well educated. As the show's policies are changing and as Kennedy continued to evolve as an artist, however, he felt it was time to try something new.

In addition to performing in and creating shows over the years, Kennedy and his wife started the Philadelphia School of Circus Arts in 2008 after knocking out a ceiling to create a 17-foot high studio in their home with a trapeze. The school has since been expanded into a 5,000 square-foot operation in Germantown.

“I just wanted to move back and do the next thing,” Kennedy said, about returning to Germantown. “After five years on the road my sketchbook was really full.”

“Theorem” begins Friday, Sept. 5, 7:30 p.m., and will be performed 12 times through Sept. 21.For more information, tickets and a schedule of “Theorem's” showings at the Funicular Station, 416 W. Coulter St., Germantown, call 215-413-1318, email patronservices@fringearts.com or visit innovativejuggler.com.