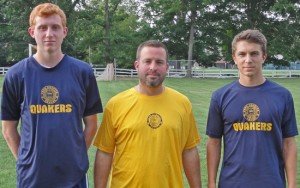 The Quakers’ situation has changed a bit since then.

Junior Sean O’Brien, an All-Inter-Ac League midfielder who started for the Quakers since his freshman year, has chosen to focus on basketball and did not come out for the soccer squad this season. One other current junior at Penn Charter and two seniors also did not return, giving the Quakers a little different look than expected.

Veteran head coach Bob DiBenedetto (who has won Inter-Ac championships both at PC and at the old Chestnut Hill Academy) still has a strong core of seniors to build around, starting with tri-captains who make up most of the starting defensive unit, Sam Agre, Josh Cannon, and Ted Foley.

Four other seniors are back, David Kotch, Ed McLaughlin, Ray Vandegrift, and Zach Weinberg, and two new upperclassmen are joining the varsity, Andrew Paisley and Will Sutor.

Vandegrift, a star lacrosse attackman who unfortunately was injured last spring, is also an offensive force on the soccer pitch. Paisley is a reserve goalie for the Quakers and the starter is freshman keeper Andrew Verdi, who was a member of the Under-14 U.S. National Team this summer.

Current Charter juniors Matt Sullivan, Brad Jones, and Cole Brown are all third-year varsity players; Sullivan broke into the starting line-up as a freshman. Jones is a forward, and the other returning juniors, including Devon Smith, play in the midfield. A fifth 11th-grader, Mason Thomas, is stepping up to varsity this fall.

Sophomores James Vandegrift (Ray’s brother), Adison Cripe, and Luke Zieger are primarily outside midfielders, and Charter will get even more depth in the middle from Harrison Williams, the only freshman besides Verdi on the varsity roster for the start of the season.

Opening their season in the nation’s capitol, the Quakers dropped two games but made respectable showings against perennial Washington-area powers DeMatha (a 1-2 outcome) and Gonzaga (0-2). Last Thursday the Quakers strolled down the lane to record a 3-2 win over a young but feisty Germantown Friends squad. Facing another Friends Schools League team on Saturday, Charter played without five regular starters and fell to Friends Central, 2-1.