An architect’s rendering of the condos planned for the site where the historic Garrett-Dun House once stood at 7048 Germantown Ave. in Mt. Airy.[/caption] by Kevin Dicciani The property where … 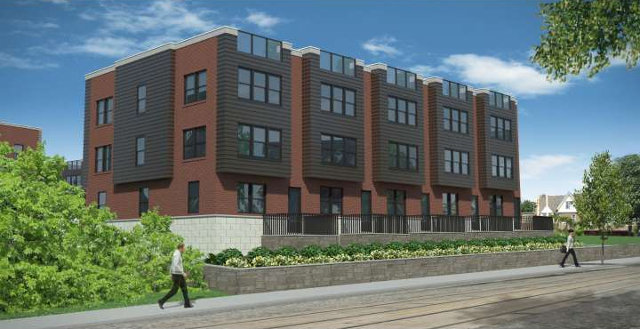 An architect’s rendering of the condos planned for the site where the historic Garrett-Dun House once stood at 7048 Germantown Ave. in Mt. Airy.[/caption]

The property where the historic Garrett-Dunn House once sat, at 7048 Germantown Ave. in Mt. Airy, will soon be developed into a $12 million, 32-unit condominium and townhouse project named Pipers Glen.

The Garrett-Dunn House was built in 1835 for merchant George Howell Garrett by the noted architect Thomas Ustick Walter. In 2006 the home joined the Philadelphia Register of Historic Places after protests from locals who attempted to stop the site from being developed by John Capoferri, who planned on turning the house and its barn into a 19-unit condominium.

Construction was halted in 2008 when the city found the property to be neglected and in decay. More than a year later the house was destroyed in a fire. Capoferri was eventually convicted of fraud, theft and forgery and sent to jail.

Iron Stone Strategic Capital Partners then purchased the property at a sheriff's sale and drew up plans to develop it into a 32-unit condominium. When the plans fell through, Wissahickon Village Cohousing began working with Iron Stone, but the group eventually put the property up for sale in 2013. MEH Investments then entered an agreement of sale with Iron Stone to purchase the historic property.

Brad McCleary, MEH's vice president of business development, said from the beginning the goal of the project was to “create a neighborhood, not just a development.” All of the plans, he said, which are being formed by the Halligan Development Team, were conceived with a “strong social element in mind.”

Those plans include 10 bi-level condos in five duplexes that will face Germantown Ave., and 22 townhouses located behind them. Every duplex will have its own entrance rather than one shared entryway for all of the condos. Each 1400-square foot condo will have three bedrooms and three bathrooms. The upper-level condos will have roof decks and the lower-level ones will have a small patio that looks out on Germantown Ave.

The three-story, 2,700-square foot townhouses will have three or four bedrooms, each with its own roof-deck, which McCleary said “will create an added social benefit to residential living and create more controllable green space for the occupants.” Owners will have the ability to customize the unit’s interior, which is to be fitted with red oak flooring, bay windows and luxury appliances. Each unit will have its own parking space, and eight guest parking spots will be on the premises. A dog park will be constructed for residents.

“Pipers Glen will have the benefits of a private community within a very public neighborhood setting,” McCleary said.

The site the project is being built upon is 95 percent permeable, which McCleary said will differentiate Pipers Glen from your average construction project. He said Jim Maransky, of E-Built Construction, who is responsible for building the IceHouse in Fishtown, is a “seasoned and conscientious veteran of green construction.”

Additionally, McCleary said the team MEH assembled for the project, such as Elfant Wissahickon and Valley Green Bank, have strong, local ties to the community and were chosen to ensure that Pipers Glen is “designed, built, and delivered at the highest level.”

McCleary said Pipers Glen will be a draw for both outsiders unfamiliar with the area as well as locals who are looking for a new place to live but don't want to leave their community. He said the development will “hopefully attract a forward-thinking buyer who will embrace Mt. Airy’s vibrant culture and support local businesses.”

Whoever does decide to call Pipers Glen their home, they can expect a progressive and smart living experience, McCleary said.

“Pipers Glen will be a well-lit, safe campus with private parking and easy access to the commercial district,” he added. “It will be a great place to live on the Avenue.”

Mt. Airy author and labor expert 'On the Job' June 21