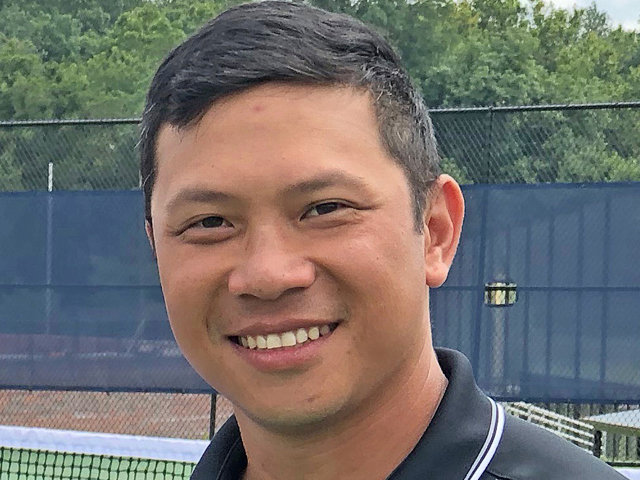 After helping the old Chestnut Hill Academy win a string of Inter-Ac League tennis championships while earning individual MVP honors, Ryan Gargullo graduated in 1998 and went on to play for La Salle University. When his formal playing career ended, he held numerous positions as a coach and instructor.

Now he's back coaching the boys' varsity team at his alma mater, the current Springside Chestnut Hill Academy, but he took a circuitous route to get there.

From 2010 to 2012, Gargullo served as an assistant coach for the successful men's and women's teams at Chestnut Hill College. Later, he spent two years in Florida as a coach and as Director of Placement at the Evert Tennis Academy. He returned to the Philadelphia area in 2016 to take on the role of head coach at CHC for both men and women. In 2017 he was named Coach of the Year in the NCAA Division II Central Atlantic Collegiate Conference.

Departing from Chestnut Hill College, he served as the varsity girls' coach at Germantown Academy in the fall of 2018. Early this year he found himself headed back to Willow Grove Avenue when SCH hired him as coach of the boys' varsity.

Back when Gargullo was in high school, CHA and neighboring Springside School each had a limited number of tennis courts of their own, and during interscholastic bouts in was necessary for coaches and players to traipse back and forth between the two facilities so that matches could be completed in a timely manner.

Now, there is an integrated complex of SCH courts, with a pavilion alongside.

"It's like coming back home, but to a home that's been renovated," Gargullo commented. "There are plenty of things that you recognize, but a lot of new developments as well. There's been a lot of change for the better."

Of course, few of the coaches and administrators he knew as a student are still there.

He explained, "When they were looking for a coach at SCH, I was kind of on their radar because I knew some players who go there."

Gargullo was familiar with current seniors Levi Veleanu and Carlo and Sante Filippini, and also with sophomore David Lubell.

"Things worked out to where the school offered me the position and I accepted," Gargullo said.

He continues to be an instructor at Green Valley Country Club in Lafayette Hill, and he and his wife live in Blue Bell with their three young children.

While Springside Chestnut Hill teams have not produced Inter-Ac championships like the CHA squads of the late 1990's, Gargullo notes that the Blue Devils appear to be on the upswing.

"Last year they made a big step by coming in second in the league, which was their best finish in a long time," he pointed out.

Although there may be no actual 2020 season, the new SCH coach was glad to see plans for the reintroduction of a double-round of matches within the Inter-Ac, instead of each team just playing the others once during the spring.

"With the single round, a team can have just one bad day and almost drop out of contention for a title," he said. "A loss doesn't hurt you as much with a double round of matches."

Gargullo has a trusted assistant coach in his longtime colleague Drew Silverman. A physical education teacher for the School District of Philadelphia, Silverman worked with Gargullo at Chestnut Hill College and at GA.

"The goal," Gargullo said, "is to have all of us on the same page, so that we have continuity in developing players from the start of middle school right through high school. The athletic director, Dave Wilson, is definitely behind that idea, and he's been very helpful."