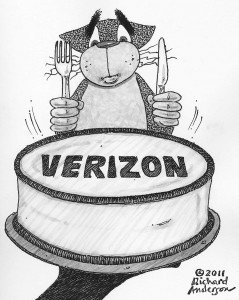 You might have missed the headline last week. It was important enough to make the front page of the Philadelphia Inquirer, but it was on the bottom right corner. Anyone in a hurry to check the local news or the Phillies box score might have missed it.

The news was that Joseph James Sr., a Mt. Airy resident and city official with the Division of Technology, was fired after the city’s Inspector General Office discovered James had accepted $48,000 in gifts from Verizon while he was responsible for overseeing the city’s $12 million contract for voice and data services.

James, who earned $124,000 a year as the city’s deputy chief information officer of communications and operations, had set himself up as the beneficiary of a Verizon Rewards account for the city’s business. According to the Inquirer’s report, James received meals, iPods, television sets, Tumi tote bags and gift cards to Macy’s and Best Buy.

After he was fired, the city was left with more than $100,000 in unclaimed credits that the Managing Director’s office said it will cash in for community beautification projects.

Of course none of James’ acts were in keeping with the Mayor’s orders that prohibit all employees from accepting anything of value from city vendors.

To be fair, James was not alone. Another city employee, Concetta D. Lilly-Pearson and a former employee, Francis G. Punzo, also benefited from the largess of Verizon and other city vendors. Lilly-Pearson received much less than James and was demoted and suspended, but kept her job.

For many, it’s a story that probably earns a shrug. Just another bum using his position in city government to enrich himself. We’ve heard that same story so many times, and often the crimes are much worse – officials with much more responsibility earning far more money for their misdeeds than James.

It’s good to know that the Inspector General’s Office doesn’t feel this way. Headed by former prosecutor Amy Kurland, the department has vigorously moved to root out theft, graft and ethical shortcomings in city government. Kurkland told the Inquirer, in an interview published Sunday, that she feels her department has had a lot of success and that complaints against city workers are down.

(Disclosure: I follow the work of the Inspector General closely because our former prize writer and news editor Joel Hoffmann left the Local to work for Kurland. Hoffmann, ever the Local’s Jimmy McNulty (see “The Wire”), is a talented investigator and writer whose hard nose for rooting out wrongs has got to be a major asset to the Inspector General’s Office and the city.)

With trust in all aspects of government at an all-time low, the work of the Inspector General’s Office is more important than ever. Human history has shown that people aren’t capable of policing themselves or even adhering to concrete ethical guidelines.

Without an office to investigate corruption, I have no doubt that it would rise to a level that would challenge even the most skeptical imaginations. We wouldn’t even be able to conceive of how deep corruption would run.

So, yeah, James might seem small at first, but nabbing him and publicizing it is an incredibly important step in making sure other public employees consider the consequences of violating ethical guidelines while on the job. The Inspector General’s Office did the city a great service here.

Even if we don’t sweat the small stuff, it’s nice to know that someone is doing it for us.