Successful rebirth of Italian eatery at top of Hill

by Missy and Dick Lee Why is the storefront at 8630 Germantown Avenue like a bride? Because it’s imbued with something old (the site of two other recent restaurants), something new (a new …

Successful rebirth of Italian eatery at top of Hill

by Missy and Dick Lee 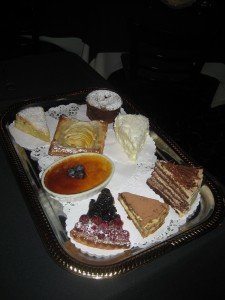 Why is the storefront at 8630 Germantown Avenue like a bride? Because it’s imbued with something old (the site of two other recent restaurants), something new (a new restaurant), something borrowed (the Bring Your Own Bottle policy of the most recent restaurant — with no corkage fee), and something blue (a midnight blue theme color tastefully presented — even to the blue scallop shell sink in the renovated bathroom).

The site most recently housed Bocelli 2, the Hill “sister” of a Gwynedd Valley BYOB of the same name, for three years — and before that, Al Dana, a Middle Eastern restaurant. A three-way partnership existed at Bocelli 2. One partner ran the Gwynedd restaurant, another ran Bocelli 2, and the third ran between the two, helping out as needed. The partnership dissolved, however, late last year. The property was then closed for two weeks for renovations, but it reopened in mid-January with a new name, new menu and one new chef (and two holdovers from Bocelli 2).

Now, Anis Kharroubi, 35, the partner who operated Bocelli 2, is “going solo” as the owner/executive chef of Stella Sera, “Evening Star” in Italian. Based on our visit shortly after its soft, no-fanfare re-opening, Stella Sera is already filling the need for an intimate restaurant with attentive service and creative cuisine. (We had also dined at Bocelli 2 several times and thoroughly enjoyed it.) In the makeover, the formality of well-set tables has been retained; there is new carpeting, new graphics (great photomurals of Italy), and the dark-blue theme color adds subtle touches of sophistication.

Customers are already taking ample note. We visited at 5:30 on a Friday in late February, so we could interview Anis and his charming wife, Kimberly, who helps out on weekends and otherwise does the restaurant’s accounting at home in Warrington, where the couple lives with sons Aimen, 5, and Malek, 1 ½. When we left at 7:15, Stella Sera was totally filled.

In the wine business, “good value for money” means a wine that delivers  the essential characteristics of a high-priced wine, but without the high price. In the food business, we’d say Stella Sera is “good value for money” too — in exactly the same way. Although the cuisine is unquestionably Italian, it’s not of the red-sauce-everywhere variety. Instead, it’s varied in just about every way. 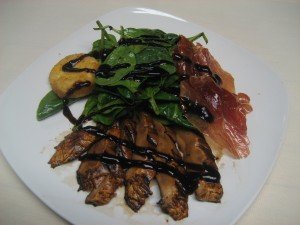 For example, there are two soups and six salads at $6 to $13 (“No 95 cents nonsense,” according to Anis), seven hot appetizers at $8 to $14, and 31 entrees ranging from $15 (pasta primavera) to $24 for — gasp! — veal medallions with lobster, smoked Mozzarella, mushrooms and roasted pepper in a brandy veal reduction.

All pastas are made fresh daily, and as an extra-nice touch, every pasta dish is  made to order with your choice of spaghetti, cappellini, fettucine, pappardelle or penne. One of us settled on a hot appetizer in lieu of entrée, seafood crepe ($14). It was generous enough even for a non-dainty appetite: filled with shrimp, scallops, crabmeat, smoked salmon and mixed cheeses and trimmed with a lemon butter sauce. Verdict: good, but in need of an indefinable something more, perhaps in the sauce.

The other of us went full-bore, starting with an evening special, a beautifully presented tomato, avocado and mozzarella salad with roasted pepper coulis and baby greens, $10.  Next (and last) came another special: fettucine with grilled shrimp, spinach and tomatoes in a garlic wine sauce, $20. (We think both dishes deserve a place on the permanent menu!) Especially noteworthy was the way in which the varied ingredients in these dishes projected their individuality, yet also created crisply blended flavors. Again, like a “value for money” wine, the food flavors of each dish just kept opening up. Fresh ingredients show every time!

Our light eater had room for dessert, selected from a small but attractive tray assortment, but had it packed to go. On opening the container at home, there was a little collection of fruits to keep the excellent cannoli company — what a nice touch!

[caption id="attachment_3297" align="alignright" width="300" caption="Kimberly and Anis Kharroubi, owners of Stella Sera, pose with one of the restaurant’s photomurals of Italy. (Photo by Richard Lee)"] 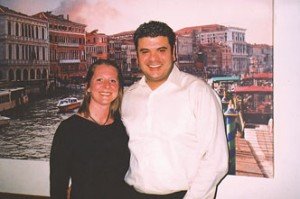 Now for the back-story, that of Anis Kharroubi. Anis came here from Tunisia in September, 1997, at age 21. “I wanted to move to the States,” and he was able to do so. He worked for three years as a translator of Arabic to English and French to English. (“French is the second language of Tunisia,” he told us.) In 2000, he entered the restaurant business, the one he always wanted to pursue.

“I didn’t go to culinary school; I’m self-taught,” he said. “I worked in plenty of places, all over Bucks County, also in Jenkintown and Blue Bell. I started in the front of the house, then got involved in the kitchen.” By this time, we’d say he’s seen it all and done it all — well, almost. After three years as the Bocelli 2 partner, he’s now just where he wants to be: running his own show. With Anis at the helm and serving as host, the front of house is also aided by a charming hostess from Poland, Ewa (“Eva”) Zeljazkow.

We asked Anis’ opinion on life as it is now in Tunisia, especially since the recent revolution and change of government there and in neighboring Egypt. “I’m very happy for Tunisia, and my family there is, too. Our president left in January. The change is long overdue. The worst part, though, with Tunisia, Egypt and elsewhere in the region is, we don’t know what’s going to happen next. And, yes, like Egypt, the changes in Tunisia were driven by social media — Twitter and Facebook. Nobody can stop when they’re able to connect that way.”

Anis was in Tunisia for a visit a year ago, but “I’m not about to get back soon.”

That’s not surprising, given the launch of Stella Sera. The restaurant is getting busier every evening. Also, lunches are to be added soon.

Stella Sera, 8630 Germantown Ave. Open  for dinner from 5 to 9, Mondays through Thursdays; 5 to 10, Fridays and Saturdays; 4 to 9, Sundays; major credit cards accepted. Reservations suggested, especially on weekends: 215-248-1980. A website, stellasera.com is on the way, too, with menus and other good stuff. You can currently view the menu at menupages.com.