With the goal of advancing equity and racial justice in their respective schools, an ambitious group of 21 student diversity leaders from area independent and Catholic schools convened online in … 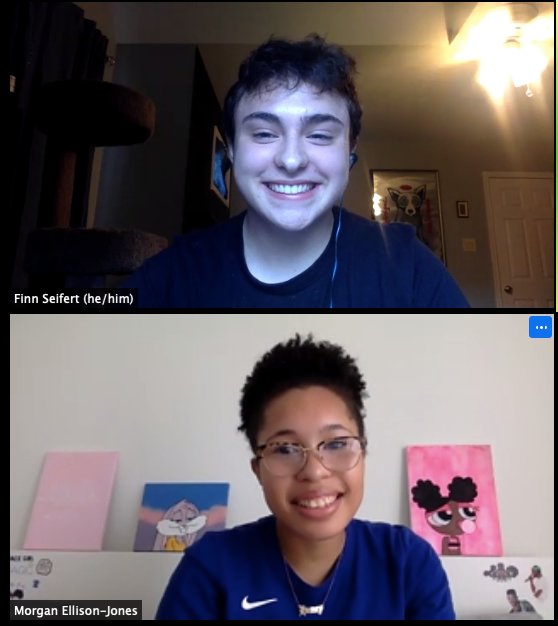 This August, Springside Chestnut Hill Academy seniors Finn Seifert (above) and Morgan Elison-Jones (below) led a group of area independent and Catholic school diversity leaders to form "Action Independent." Their mission: Help bring predominantly white institutions together to talk about how they can combat inequality and inequity within their school communities.
Posted Wednesday, September 9, 2020 12:48 pm
By Deidra Lyngard

With the goal of advancing equity and racial justice in their respective schools, an ambitious group of 21 student diversity leaders from area independent and Catholic schools convened online in mid-August for an initial three-hour conversation and to officially launch the student collective called Action Independent. The group agreed to meet as needed to talk about specific issues and to help create structures that hold prejudiced actions and people accountable, while ensuring that all voices within their school communities are heard.

The brainchild of Morgan Ellison-Jones, co-head of Springside Chestnut Hill Academy’s student-led Diversity, Equity, and Inclusion Council (DEI) and her DEI co-head, Finn Seifert, Action Independent (AI) defines its mission as “bringing our predominantly white institutions together to talk about how we can combat inequality and inequity within our school communities.”

“I attended the Student Diversity Leadership Conference in Seattle last December, and it was there that I realized how much students can learn from each other,” explains Ellison-Jones. “I was able to create bonds with students from across the country who shared the goal of creating change in our communities. I figured if the students at the conference could learn and create action, why couldn't we do the same in Philadelphia? So, after much time brainstorming with Finn, Action Independent was born.”

On their first conference call, the students spent time discussing what’s working well in their school communities, what needs to work better, and strategies for tackling some of the challenges. These included building connection and communication with administrators and board members, shaping student accountability in order to shift a "subtle culture of racism," developing mentorship programs for students, revamping problematic aspects of the curriculum, and learning about socioeconomic differences in ways that create authentic partnerships with other communities and foster understanding of people's lived experiences.

A clear theme of the meeting was accountability. The students organized themselves into "accountability partnerships" to motivate each other to stay on track with their goals and action plans between now and their next meeting in November. And they are clearly poised to keep their schools accountable, citing the spate of recent Instagram posts on @Blackmainlinespeaks, @metoomontco, and @lgbtqonthemainline calling on the area’s predominantly white independent schools to examine and improve their cultures and practices.

Despite the virtual setting of the collective’s first meeting, the positive energy and desire to take action was palpable among the students,” says Seifert. “Morgan and I are thrilled that so many students came focused and energized for change. Like our fellow Action Independent members, we have a lot of hope for what is to come this year.“