Stagecrafters' next play written by its own director

Yaga Brady is seen on The Stagecrafters stage, with most of the set in place, "trying" the quill pen which will be used during performances of “The Golden Coach,” written and directed by Brady …

Stagecrafters' next play written by its own director 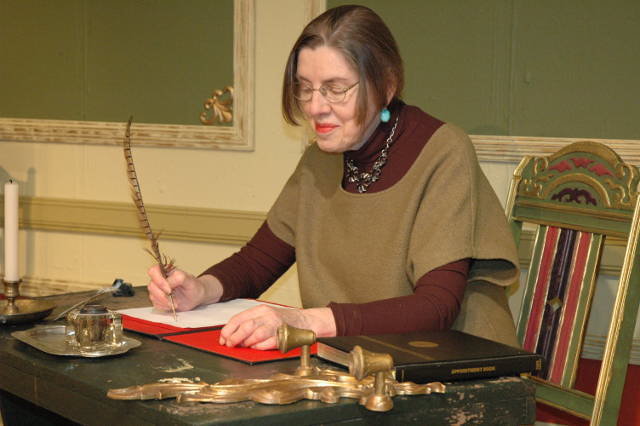 Yaga Brady is seen on The Stagecrafters stage, with most of the set in place, "trying" the quill pen which will be used during performances of “The Golden Coach,” written and directed by Brady and being performed April 10 to 26. (Photos by Sara Stewart)[/caption]

There are dozens of community theaters in the Greater Philadelphia area where actors and directors get to stage the works of the greatest playwrights in the history of the Western world's theatrical canon — Shakespeare, Eugene O'Neill, Arthur Miller, Moliere, Neil Simon, Ibsen, Shaw, David Mamet, et al.

But from April 10 to 26, The Stagecrafters of Chestnut Hill will have the rare distinction of staging a play, “The Golden Coach,” written not by a name found in the Encyclopedia Brittanica but by one of its own, Yaga Brady, who has directed more than 20 full-scale productions at The Stagecrafters, plus a few staged readings, over more than 25 years.

“This is not a truly original play,” conceded Yaga. “It is a rather extensive adaptation of an 1829 play, 'Le Carrosse de Saint-Sacrement,' by the French author Prosper Merimee. I felt reluctant to put Merimee as the author, though, fearing that some French literature purist might come along and accuse me of falsifying the words and intentions of so highly a respected man of letters.”

Brady, who “will disclose my exact age to the world when I reach 100, not before,” is no neophyte to translating the works of classic European playwrights. A few years ago she translated and (“very slightly”) adapted “The Cherry Orchard” by Chekhov. It was performed at The Stagecrafters, enjoyed a large audience and was very well received. Several years ago she was also one of the translators from Polish of “Shoemakers” by Witkacy, which was performed in several theaters around the country.

Brady has studied numerous foreign languages since her childhood in Poland, not so much out of necessity but because she was always intrigued by “exotic” tongues and cultures, and throughout her youth she displayed a very high aptitude for language absorption. She learned English essentially on her own at home. Brady received a Ph.D. from Northwestern University, where she studied theater, linguistics and European literature. She has been involved in theater since her childhood, studied directing in Warsaw, Poland, then worked in professional theaters in London and later enrolled in the theater department at Northwestern.

Regarding “The Golden Coach,” she said, “Originally, I just wanted to introduce to our audiences some works by Merimee, who is famous for his Spanish-themed plays and novellas, like 'Carmen,' but since I could not find any English translations of his plays, I decided to try to translate one of them myself and present it at our theater as a reading. It was not the easiest job; translating from French does not come to me naturally. I chose 'Le Carrosse,' a one-act play I was somewhat familiar with. 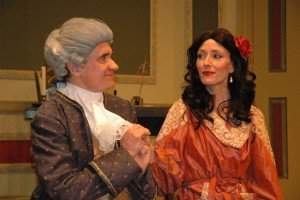 Seen here in rehearsal are Carl Heyde and Carol Enoch, stars of “The Golden Coach,” written and directed by Yaga Brady, long-time director at The Stagecrafters.[/caption]

“But after I did the job of translating, I was not happy with the two main characters as they emerged from this play, particularly that by then I knew that the two were modeled on real-life people. Yet, I did like the play as a whole — its humor, clever social satire and its so elegant and yet simple language. So I decided to kind of rewrite it, keeping the author’s main narrative thread and the style intact as much as possible, but giving the two main characters some extra background and possibly more complex motivations.

“In the original, the main female character is clever, scheming and very vain. In my version I tried to make her clever and manipulative but also highly intelligent, imaginative, brave and with a clearly defined purpose in life. I called her Micaela, the character’s real-life name. In the original she is called Camila.”

Yaga first heard “Le Carrosse” as a radio play in Warsaw when she was a child. She recalled that she listened to it with her grandmother, who found it hysterically funny, but Yaga didn’t think much of the play at all. A few years later Brady saw Renoir’s movie, “The Golden Coach,” with Anna Magnani, which she liked a lot more. As time went on, Yaga's interest in the play became greater “when I realized that the two main characters were real-life people who had a long-lasting liaison which shocked and almost rocked the Spanish empire in the late 18th century.”

Of all the plays Yaga has directed, her favorites were two great comedy-farces: a British classic, “The Importance of Being Earnest,” and an American one, “The Matchmaker.” Others that she cherished were “'Ladies in Retirement,' a forgotten oldie, which turned out to ‘play’ surprisingly contemporary,” as well as “The Little Foxes” and “The Night of the Iguana.”

Yaga has no plans at the moment to write any original plays, but she would like to do more adaptations of older or foreign-language pieces. She has been married to Steve Brady for well over 40 years. They have one married daughter and two young grandsons who live nearby and are theatergoers. Steve, who worked for many years as a senior researcher for Merck Research Laboratories, upon his retirement decided to devote much of his time to The Stagecrafters as a producer, public relations man and in many other capacities.

More information about “The Golden Coach” at 215-247-8881 or www.thestagecrafters.org. The theater is located at 8130 Germantown Ave.