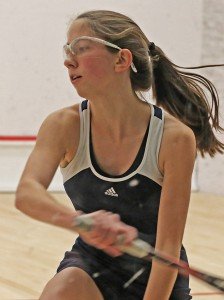 Last week the 2013 U.S. Squash High School National Championships were cancelled two days before a massive snowstorm overwhelmed the Connecticut venues for the tournament. As things turned out, the last competition that area girls teams would see this winter took place at the Mid-Atlantic Squash Associaiton (MASA) Championships on Saturday, February 2.

The Germantown Friends School racquetwomen went into two of their three matches missing their preeminent player, and the Tigers finished fourth in Division I of the MASA tourney, while Springside Chestnut Hill Academy came in fifth. Penn Charter also performed on the final day of the competition at New Jersey’s Lawrenceville School. Seeded in Division II this year, the Quakers wound up in second place.

The third through sixth seeds in each of the two MASA divisions played first-round matches during the week leading up to the general gathering at Lawrenceville on February 2.

On the last day of January, SCH travelled to Germantown Friends for one of these early matches, and the host Tigers easily carried the day, 8-1. Junior ace Olivia Fiechter won 3-0 against the Lions’ sophomore number one, Francesca Fabiani. Unfortunately, while practicing later that day, the GFS 11th-grader suffered a short-term neck injury that was enough to keep her out of action in the “final four” phase of the tourney.

Germantown sophomores Grayson Melby and Annie Tyson were both 3-0 winners in the second and third spots over SCH juniors Caroline Canning and Courtney Hamilton. The Lions’ lone win came at number four, where freshman Samira Baird beat senior host Anna Bezahler in a five-game tussle, taking the fifth round by a score of 12-10.

Going down the team ladder, there were 3-0 wins for Germantown Friends in the fifth, sixth, and seventh spots: at five it was Claire Schmidt over fellow junior Sarrah Schreffler, between juniors at number six Hannah Safford swept Leah Beight, and at seven it was freshman Elizabeth Wallace over SCH sophomore Allison Day.

It was on to the semifinal round on Saturday morning for the Tigers, who would really feel the loss of Fiechter at the head of the line-up. Everybody who’d played in the previous match bumped up one spot for the weekend, and the ninth position was filled by sophomore Taara Advani. Germantown still got a win at number one as Melby stepped up and fought through to a 3-2 victory, but the rest of the team succumbed to the opposition from Episcopal Academy as the Churchwomen captured the match, 8-1. EA would go on to suffer a 9-0 setback against Baldwin School in the championship match, and unfortunately for GFS fans, their club was also on the wrong end of a 9-0 score in the third-place playoff against tourney host Lawrenceville.

SCH also hopped the Delaware to play at the New Jersey boarding school. One of just two teams in the consolation bracket, the Lions were able to avenge a pair of regular-season losses to Agnes Irwin by edging out the Owls, 5-4, in a struggle for fifth place.

Senior Hannah Baxter, who had not played against GFS on Thursday, was back in the line-up on Saturday, performing in the fifth position. Although she lost a five-gamer against Irwin, her presence helped some of her teammates move down to lower flights in the order, and at number seven Beight notched a key 3-1 victory for the Lions.

In their regular spots, Fabiani, Canning, and Baird were all 3-1 winners, as well, while Hamilton wrapped up the number three bout in three straight games.

Penn Charter, slotted in Division II of the MASA championships, was seeded second and thus received a first-round bye. Opening up on Saturday by facing the combination team from two Main Line high schools, Harriton and Lower Merion, the Quakers came through, 5-4.

PC has gotten a pretty reliable one-two punch this winter from junior number one Margaux Losty and sophomore number two Izzy Hirschberg, and they dispatched their HLM rivals by scores of 3-1 and 3-0, respectively.

With the team score tied at 4-4, players gathered round the number four court, where junior Leigh Steinberg’s 3-0 sweep put PC over the top.

Charter then lost by a single individual bout in the Division B final against Shipley School, but the 4-5 outcome represented a better performance than PC had turned in against the Gators at the start of the season, when the Quakers lost on their own courts, 2-7.

Losty and Hirshberg were on-the-money once more, each winning 3-0, and the other Charter victories were 3-1 affairs involving Stokes and senior number five Ryann Shaffer.