As the Inter-Ac League tennis season moved into its final phase, the girls of Springside Chestnut Hill Academy split a pair of matches against Main Line rivals in the middle of last week. 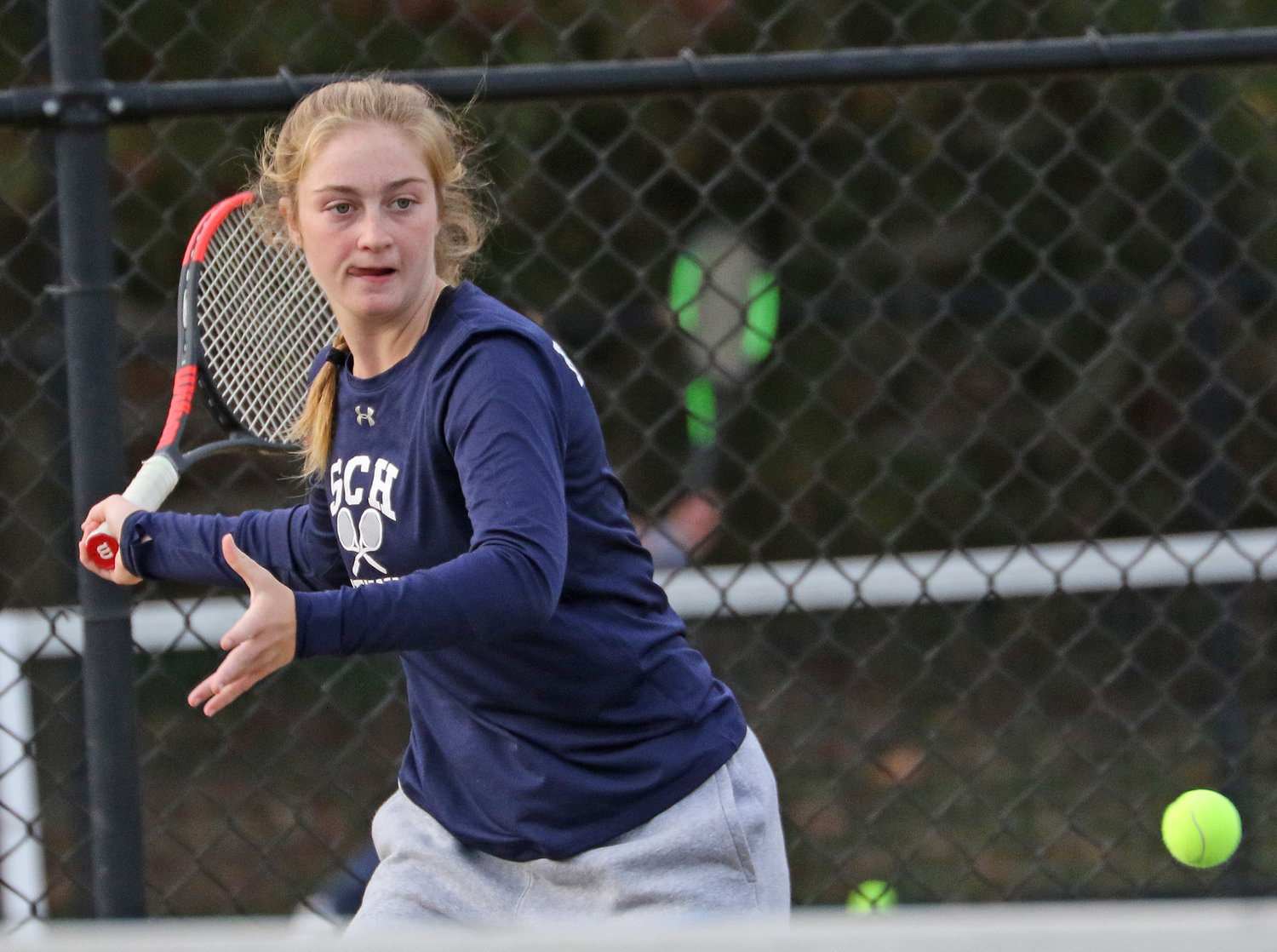 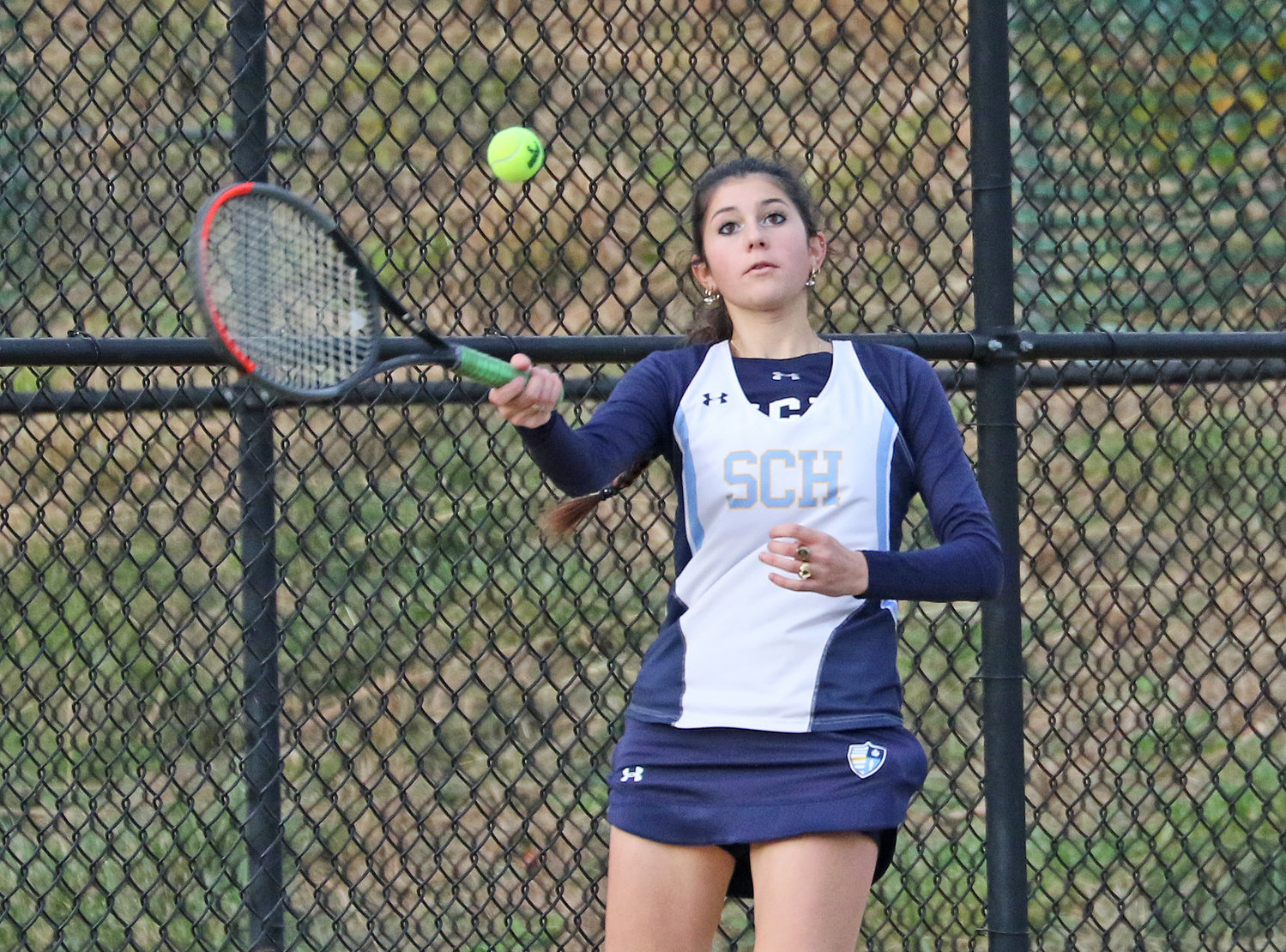 At third singles, SCH Cameron Golden hits a forehand from beyond the baseline.
Tom Utescher
Previous Next
Posted Monday, November 8, 2021 8:30 am
by Tom Utescher

As the Inter-Ac League tennis season moved into its final phase, the girls of Springside Chestnut Hill Academy split a pair of matches against Main Line rivals in the middle of last week.

In a Wednesday road match, the Blue Devils took the measure of the Academy of Notre Dame, 4-3. A tougher task followed on Thursday, when perennial league power Episcopal Academy arrived in Chestnut Hill and swept the Devils, 7-0.

With Wednesday's win, SCH completed a sweep of the Irish, and in recent history the Devils have had a tough time securing any wins against the four league schools that lie west of the Schuylkill.

The team started out by suffering a 1-6 setback at the hands of Friends Schools League champ Germantown Friends, but the Blue Devils stabilized their season with some wins against Suburban One League schools such as Springfield and Plymouth Whitemarsh. Another non-league opponent SCH was able to overcome was Hill School (4-3), another familiar rival that has often gotten the better of the locals in the past.

The squad had a 7-9 record overall at the end of last week, and head coach Ryan Gargullo noted "In the matches we lost, we had a number of individual matches go three sets."

Gargullo, a 1998 graduate of Chestnut Hill Academy, took the helm of the SCH boys' team in the spring of 2020, then became the mentor for the Blue Devil girls, as well.

Last Wednesday, the SCH girls traveled to Overbrook Golf Club, which is located next to the Academy of Notre Dame and is the home venue for the Irish tennis team.

A solid foundation for success was laid by the Blue Devils' top two singles players. Number one Emma Bradbury, a junior, triumphed 6-1, 6-3, while in the second spot sophomore Ameara Smith won, 3-6, 6-4, 10-6. Smith had played third singles earlier in the season, and moved up one rung on the ladder a few weeks ago. Her victory at Notre Dame was the fourth SCH win in the overall sequence, clinching the team triumph for the visitors.

At third singles, SCH senior Cameron Golden fell to her Notre Dame rival in a pair of 2-6 sets. Unusually, the Blue Devils also succumbed in the first doubles contest. Springside juniors Winslow Tracy and Isabella De Cesare have had quite a successful season overall, but here they lost, 3-6, 2-6.

However, the first match to finish last Wednesday was a second doubles bout that had gone the Blue Devils' way. Seniors Avery Allen and Katie Filshill made short work of their Irish opponents, 6-1, 6-2. Battling to a "W" at third doubles were junior Elena Martinez and senior Lauren Gregson of SCH, who won 7-6, 7-5.

On the same afternoon, league leader Episcopal handed Penn Charter a 7-0 defeat. On Thursday, the formidable Churchwomen traveled to Chestnut Hill to knock off SCH by the same score.

The winner at first singles (6-1, 6-2) was EA senior Ashley Kennedy, who actually attended middle school at Springside Chestnut Hill before moving across the Schuylkill to Episcopal.