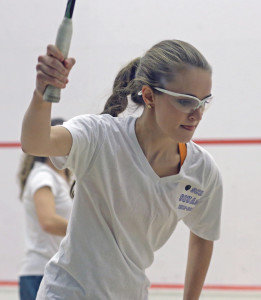 Last Thursday was Senior Day for the girls squash team at Springside Chestnut Hill Academy, and since the Blue Devils weren’t playing a powerhouse opponent, veteran coach Rich Sheppard was able to alter his line-up and allow seven seniors to see action.

Even with four of the regular top nine taking the day off, SCH dispatched visiting Shipley School, 8-1, winning at the top eight positions by 3-0 scores.

With only a road match at Penn Charter remaining on their regular-season schedule, the Blue Devils assured themselves of a winning record with Thursday’s triumph, rising to 7-5 overall. The team won its first encounter with Charter this season, and swept its home/away series with Agnes Irwin.

Other victories came against Hill School, Lawrenceville, and St. Andrew’s, while the “L” column shows two defeats each by Baldwin and Episcopal (the first and second-place teams in the Inter-Ac League), and a loss to Germantown Friends.

Last Thursday, two of the first matches to be completed featured the only two underclassmen in the SCH line-up, both of them freshmen. Number two Taylor Ferry overcame Shipley sophomore Britt Lovett, 11-1, 11-2, 11-8, and her classmate Joia McGivern chalked up scores of 11-5, 11-4, 11-3 against the Gators’ number four, junior Sarah Clothier.

Every match from there on out involved seniors for the home team. Co-captain Courtney Hamilton was playing the third spot, where she gathered momentum against Shipley freshman Grace Martin to win 11-9, 11-8, 11-3. At number five, Leah Beight of SCH won a close opening game, 11-9, then really had to battle to take an extended second round, 15-13. After that, she rolled through the third game, 11-1, against Gators 11th-grader Spencer Strauss.

Nina Nalle, the Blue Devils’ number seven, is the only member of the graduating class who has finalized her college plans, opting for Connecticut College in New London. She delivered a decisive victory on the court against visiting junior Anisa Iqaal, 11-2, 11-3, 11-3.

Everyone then bunched together to watch the last match on the court, in which the hosts’ Caroline Canning secured the opening game, 11-5. Fellow senior Anna Martin didn’t submit as easily in the next two games, but Canning prevailed, 11-9, 11-8.

At the Mid-Atlantic Squash Association (MASA) championships the previous weekend, Springside Chestnut Hill lost to Lawrenceville and defeated Penn Charter (both 6-3 scores) to place fifth among the seven teams in Division I.