Luke Greenberg (left) and Dane Harmaty represented SCH as part of the Future Player Academy, a Pennsylvania-based youth soccer team that competed in the U.S. Youth Soccer National Championship. by … 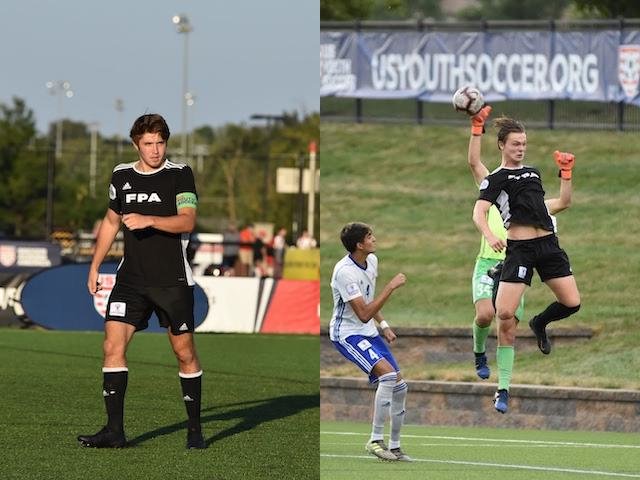 Soccer teams from all over the country recently competed in the U.S. Youth Soccer National Championship, including the Future Player Academy. The FPA is a youth soccer team for players under 18 and was one of only two teams from Pennsylvania to be competing. Two players from the FPA, Luke Greenberg and Dane Harmaty, are also members of Springside Chestnut Hill Academy’s soccer team.

“I went two or three years ago and we didn’t do too good, but this year we did better and it was more fun,” explained Harmaty about his experience playing within the nationals.

SCH’s soccer team has also experienced plenty of success in the past few years, as it is coming off of back-to-back wins in the state championships.

“It helps,” said Greenberg on how playing in two consecutive state championships prepared him for nationals. “Especially our club team, we’ve won the state championship the past three years. That helped along with the two school ones, so it’s about being calm in big games.”

FPA played a total of three games in the opening round of the tournament and went 2-1. They just missed securing the points to move out of their group stage.

“We were number one going into the third day, first in our bracket,” said Harmaty, reminiscing on FPA’s only loss at nationals. “We had to not lose a game by two or more goals and it was 1-0 them going into the 89th minute. One of the boys fouled the kid in the box, they got a penalty kick and they sunk it. So we lost 2-0 and didn’t go through. We were the only team that didn’t go through that won two games.”

“I’ll probably miss Dane the most, and then just playing with the team,” he said. “It’s always fun to win the state championship and the regional championship together.”

Paying to go to nationals isn’t easy, and Greenberg and Harmaty spoke about how their team was able to afford the traveling costs.

“A lot of it is through parents,” Harmaty said. “They throw a lot of money in and then we also had a GoFundMe that helped, and my coach did a lot to help. He did a lot for a couple of kids on the team that needed more help than others.”

“Our team also doesn’t practice as much,” Greenberg added. “There’s less of an overall cost compared to other teams. Some teams will have about $3,000 a year in expenses, where our team’s would be about half of that. So that helps to save money for going down to tournaments.”

Experiences like these usually make athletes stop and learn something new about themselves that they didn’t know before. Greenberg spoke about what he learned about himself while he was away competing at nationals.