On a penalty kick, the ball flies past Cahillites goalie Tommy Iarosis and into the back of the net as SCH shooter Andy Stackhouse (right background) looks on. (Photo by Tom Utescher) by Tom Utescher … 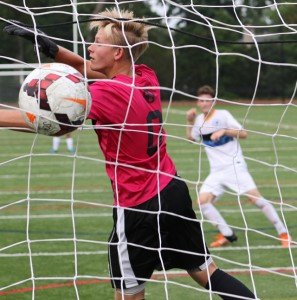 On a penalty kick, the ball flies past Cahillites goalie Tommy Iarosis and into the back of the net as SCH shooter Andy Stackhouse (right background) looks on. (Photo by Tom Utescher)

Last week's heat wave was just beginning to break late on Saturday afternoon as the boys of Springside Chestnut Hill Academy took to the soccer pitch for a game that had been pushed back to a 5:00 PM start.

The change of plans worked to everyone's advantage, especially in light of the fact that the SCH Blue Devils and visiting Roman Catholic High School went into overtime before settling for a 2-2 tie.

All three of the home team's senior captains made their way into the scoring stats. After Andy Stackhouse deposited a penalty kick that tied the game at 1-1 shortly before halftime, SCH went ahead on a Jack Lamb goal that was assisted by Malcolm Glendinning. It was then the Cahillites' turn to come back for a tie, sending the game into overtime. Neither team was able to score during the OT, and the non-league match went into the books as a draw.

It was the second tie for the Blue Devils (0-1-2), who had opened up the week before with a 0-0 stalemate at Germantown Friends, and had then suffered a 3-0 home field loss to Strath Haven High School last Tuesday.

While the senior captains were busy in the offensive end on Saturday, juniors Matt Greenberg and Tague Harmaty and sophomores Matthew Bown and Jack Myers were ranged along the back row in front of sophomore goalie Owen Elliott in the first period, and senior keeper David Brenman in the second half and in the overtime.

Springside Chestnut Hill earned the first corner kick of the game, but did not get off a shot. About 15 minutes in, the visitors launched a hard, low ball toward the middle of the SCH cage, and Elliott dropped to his knees to make a save.

A little over four minutes later, an attempt to clear the ball out of the defensive end by the Blue Devils was halted short of midfield by Roman, which quickly countered and got on the board first with a goal by Matt Flanagan.

Through much of the first half, the Cahillites won the majority of balls in the air, and also prevailed in most 50/50 loose ball chances down on the turf, as well. The Blue Devils got up the field for a number of offensive rushes, though, and on one of them a trip in the box by the defense resulted in an SCH penalty kick.

Stackhouse lined up at the mark and put in a high shot past Cahillite keeper Tommy Iarosis a few yards right of center. With 4:47 remaining in the opening period the hosts had pulled even at 1-1, and that's the score that was up in lights at halftime.

Like Springside Chestnut Hill, Roman made a change in their goal cage at halftime, relieving Iarosis and inserting Kevin Tobin.

The Blue Devils gained their first lead of the game - and their first lead of the season - with 20:29 left in regulation play. The SCH attackers advanced together toward the 18-yard line, and Glendinning passed the ball over to his fellow senior captain, Lamb. Shooting from a few yards inside the outer right corner of the box, Lamb sent the ball high into the opposite corner to make it 2-1.

A few minutes later one of the visiting forwards appeared to be taken down around the SCH 18, but Roman did not receive the PK it felt was warranted. Not long after that, what appeared to be a Blue Devil goal at the other end (sophomore Peter Kapp off of the rebound of a shot by junior Luke Vogelman) was negated by an offsides call.

Instead, Roman would tie the match at 2-2 with 14:10 remaining in the second half. From the right border of the box, one of the Cahillites hit a ball that travelled at moderate speed down in the direction of the far post. SCH's Brenman dove but was unable to deflect the ball out of the danger zone, and the visitors' Mike Brown closed in from the left to stuff it in.

Late in regulation, Roman put a shot into the outside of SCH's left net panel and then came up empty on a corner kick soon after that. Right near the end, sophomore Luke Greenberg made a nice serve toward the mouth of the goal, but a Roman back cleared the ball out of the middle with no Blue Devils nearby to pose a scoring threat.

The action continued into overtime, following the Inter-Ac League format of two five-minute periods, played in full. On a Roman direct kick from 20 yards out, the visitors almost got a man in position to tip the ball in at the right post, but instead it went over the endline off of SCH. On the resulting Cahillite corner, the Blue Devils' Brenman went up to bat the ball out of the box.

Later, Roman had a player leave the field with a red card and was left one man short, but the hosts were unable to cash in on this opportunity for a go-ahead goal.

Springside Chestnut Hill will play four more non-league matches over the next few weeks before opening the Inter-Ac League schedule at Germantown Academy on September 30.