Rebecca Bonner, executive director of the Bridge Way School. by Sue Ann Rybak This is the second article in a series that examines adolescence and addiction. Instead of focusing on the growing … 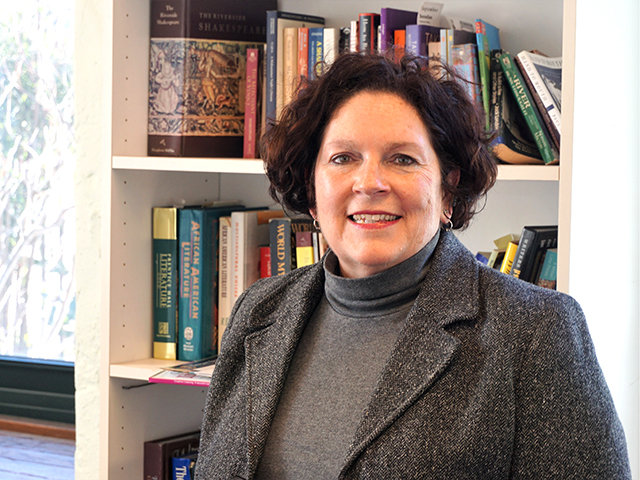 This is the second article in a series that examines adolescence and addiction. Instead of focusing on the growing problem, it attempts to make the public aware of some the programs that are attempting to address addiction and provide hope for those who struggle with addiction every day.

For many of us, just surviving adolescence was hard enough without the stigma and shame of addiction.

Rebecca Bonner, executive director at the Bridge Way School in Roxborough and a founding board member of Greater Philadelphia Association for Recovery Education, said many teenagers turn to alcohol, marijuana, prescription drugs or other substances as a means of coping with stress and peer pressure.

Bonner, who taught at Greene Street Friends for 11 years, knows firsthand the devastating effects addiction can have on a family. She decided to open a recovery school in Philadelphia after her teenage daughter struggled to overcome substance abuse in high school. Unfortunately, there are only about 35 recovery high schools in the nation. The closest one to her at the time was in Boston. Bonner ended up sending her daughter to an inpatient private boarding school that helps adolescents overcome addiction. She believes her daughter would have benefited from attending a recovery high school.

Despite the fact that addiction is a brain disease, many people still view addiction as a moral weakness. The truth is anyone can fall victim to addiction, even the most promising young athletes and scholars who seem to have it all together.

In 2013, the Substance Abuse and Mental Health Services Administration (SAMHSA) estimated that 2.3 million kids, aged 12 to 17, had used drugs. Only about 5.4 percent of those adolescents entered any kind of a treatment program.

“We would never tell an adult who has come out of treatment to go back to their job as a waitress or waiter at a bar,” said Bonner. “But, we do that with high school kids every day. They come back from treatment and we send them right back to the school, where – like it or not –  they have become the kids’ pharmacy of choice.”

“The unique thing about the recovery model is that it allows students to go home and work on relationships that were damaged,” she said. “Our students are coming from treatment in a private facility or adjudicated treatment. During treatment, they were kind of living in a bubble. We are the bridge between treatment and reentry into the community. The Bridge Way School combines a strong academic program with the support services necessary for kids to succeed and stay sober.”

The school is based on the treatment model for adolescent substance abuse and is a member of the Association of Recovery Schools. To be accepted into the program, students must have at least 30 days of sobriety and be between the ages of 14 and 20. Students must be committed to following the 12 Steps. The school recommends that students stay at the school for a year. Credits from the school are transferable to traditional public or private high schools.

“It's a typical high school curriculum, but music, PE, and art really form the cornerstone,” she said. “Art and music provide a mechanism for expression that are different from English or other academic subjects. And for kids, who are not as verbal, it's an effective way to express themselves.”

Bonner said research indicates that 8 out of 10 students who participated in a recovery school model remain sober longer.

A graduate of the Bridge Way School said that before attending the recovery high school drugs and alcohol were easy to come by.

“The people who I hung out and used with were all still right there,” he said. “Being surrounded by your old friends, your old habits, and those old places where you used to use is not a good recipe for recovery and is not a safe place for recovery to happen.”

Bonner said the school helps students “to cultivate relationships in a sober culture.” Research has shown that adolescents tend to relapse between 3 p.m. and 6 p.m. It’s just one reason why the school starts at 9 a.m. and ends at 4 p.m.

She said recovery schools can be expensive because they provide a variety of services to students, who, in addition to substance use disorders, are often dealing with mental health issues or histories of abuse. She added that thanks to funds the school receives from businesses through the Opportunity Scholarship Tax Credit Program or Educational Improvement Credit Program, almost all of the school’s students receive scholarships or financial aid.

“Tuition at Bridge Way is $20,000 a year or about $2,000 a month, but over 70 percent of our kids receive financial aid,” she said.” And many times, the sending district will cover the cost or their tuition. Almost all our Philadelphia students receive scholarships or financial aid.

“We worked really hard last year to get legislation passed for a pilot program that will remove a financial barrier for students getting access to a recovery high school. Under this program, the state will pay 60 percent of tuition and the sending school district will pay 40 percent. Unfortunately, the funding was not released last year, but we have been assured that it is on the table for this year.”

She added that economically it makes sense for states to fund substance abuse treatment programs and recovery high schools because research has shown it is more cost-effective and successful in treating substance abuse disorder in juveniles.

According to an article in U.S. News and World Report entitled “What Youth Incarceration Costs Taxpayers,” in 2014, a study by the Justice Policy Institute found that locking up a juvenile costs states an average of $407.58 a person a day or roughly $148,767 a year.

Bonner said the school provides a safe environment where young people feel supported in their efforts to recover.

According to the Center for Disease Control, 144 people die every day from drug abuse. Of those 144, more than 60 percent are victims of prescription drugs and heroin. The opioid epidemic is not just a national problem. It’s a Philadelphia problem.

According to a recent report by the Department of Public Health for the city of Philadelphia, opioid deaths were three times the number of homicides in the city of Philadelphia. And recent reports by the CDC found that the rate at which babies have been born with a drug withdrawal syndrome because they were exposed to prescription painkillers or heroin in the womb has quadrupled over the last 15 years.

For more information about the Bridge Way School go to www.thebridgewayschool.org or call Rebecca Bonner at 267-437-2194.

Part 3 of this series will run next week.