Reenactors commemorate The Battle of Germantown at Germantown's historic Cliveden House. by John O'Connell Life is full of what-might-have-beens. That is true for each of us in our secret selves, … 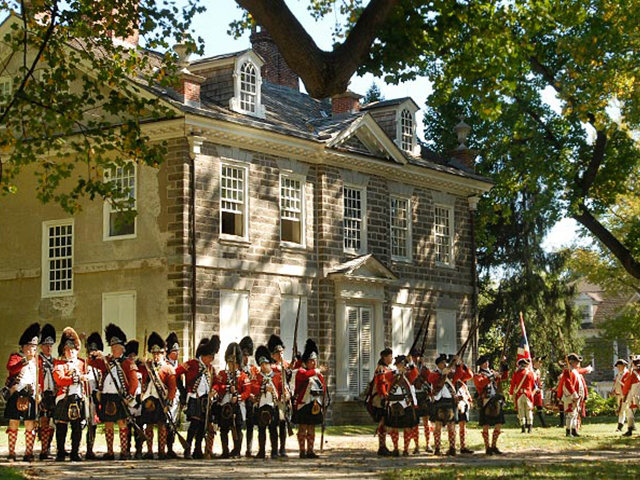 Life is full of what-might-have-beens. That is true for each of us in our secret selves, for families, for nations. Right now, I am fixated on the wasted fortunes of a part of our city important to all in my readership, and that is Germantown.

Each time I am out and about in Germantown, especially when I find myself on Germantown Avenue, I am reminded of the shopworn tale of how this historic quarter, on what once was the outskirts of Philadelphia, narrowly escaped a future of distinction and grandeur. It hurts like hell, but here it is:

Sometime not long after the end of World War II, the story goes, a group of Germantown Historical Society clubbers tried to convince a huddle of well-healed investors, that some say included J.D. Rockefeller, to quietly (okay, stealthily) forge a plan to turn this important early American main street and the great many historic sites and structures, both on and straddling it, into something similar in spirit and appearance to what had taken shape in colonial Williamsburg, Va., beginning in the 1920s.

Colonial Williamsburg, thanks chiefly to Rockefeller family impetus and largesse, was still taking shape as a living history museum, stocked with a cast of well-versed guides and shopkeepers liveried in carefully copied period wear and tutored in the grammar and diction of pre-revolutionary English speakers in the 13 colonies.

Houses, businesses and public edifices were either rehabilitated or wholly reconstructed in fidelity to what was-- and to what was lost. What visitors see today is 300 acres snatched from a careless past through the informed introduction of many "new" buildings, 18th-century-looking thoroughfares and side streets. In Williamsburg today, the financial impact of all this cannot be overstated; the preserved historical significance is immeasurable.

Germantown, circa 1950, had all the pieces in place to make the core of a successful northern version of what took root so famously and so well in a sleepy part of a sleepy state of the old Confederacy, and that would be Williamsburg. Lest we forget (and here I visit just one example of our squandered legacy): In 1792, during a raging yellow fever epidemic, our infant presidency was installed in the Deshler-Morris homestead, right on the roadway we now call "the Avenue." In addition, what would have served as a White House was nearly constructed in Germantown, on a park-like plateau overlooking Philadelphia, bustling in a commercial haze off to the south and east.

Signers of the Declaration, framers of the Constitution--many of them called Germantown home in the decades of political upheaval in America in the late 18th century. And let it be said that there stood, in revolutionary-era Germantown – the Quaker influence notwithstanding – the remnants of slave quarters.

Why shouldn't those hovels be rebuilt, if for no other reason than to be allowed to stand in didactic partnership with Germantown's wealth of Underground Railroad safe houses that came almost a century later? A sanely re-imagined Germantown for our day would give chattel slavery its due in the sort of appalling physical evidence demanded by the dictates of historical honesty. (Williamsburg doesn't play footsie with the worst of the Virginia past, pretending that this settlement didn't begin life as a greedy, barbaric slave-holding proposition; in its 20th century revivification, its managers have made sure that visitors cannot overlook slave dwellings rebuilt in truth to their long-ago awfulness.)

But imagine the intersection of Germantown and Chelten as we know it in 2018, in all its dreary commercial defeat, stark racial division and police-blotter prominence, gamely reconstituted as a thriving tourist center with brick and wood-framed architecture borrowed from the promising, young-nation days of George Washington's residence here, the surrounding streets reserved for foot and horse-travel. Yes, yes –  gone would be the foreign-infused cut-rate dollar joints and basketball shoe outlets, and gone would be the homeless and their cardboard beds.

By all means, let us finally, finally cut the destitute a better break, lend them all the help we can, but let's not forever give up on Germantown as nothing but a dump for the shoddy and hopeless. How can it not deserve better? These streets and crossroads once were a seedbed for much that gave birth to the greatest political venture in history; today, all of this needn't be a ZIP code in hell. Why shouldn't we want to preserve for centuries to come something of the rough-hewn splendor of old Germantown?

So much for my reverie. The story is thus: In the end, the Germantown Businessman's Association would have nothing to do with the gaudy plans of these officious, outsider busybodies. In the 1950s, the cash registers were singing pretty. Receipts in the Germantown shopping district were second only to those of businesses churning out profits in the environs of 12th and Market streets. Germantown's commercial fathers hadn't the least sense that the next six decades would see the disintegration of retail life in this great place that is today little else but a sea of discount bargain stores, a shuttered high school and nightly gun-play.

But hold on –  I try to tell myself. A reprise of Williamsburg just a big fat non-starter here? Sure looks like it, but other tools and levers for a better life are all around us. Germantown might yet figure as an open-sky school for remembering how freedom from slavery empowered an American people, for convincing ourselves that these mean streets needn't continue to make do as the back lot of a lousy movie about how emancipation went to waste. Germantown, a special place in spirit in spite of suicidal self-neglect, needn't for the end of our days be a stricken landscape of crappy storefronts and a playground for the wiles of absentee landlords.

The good people of Germantown (and that means me and my family of 125 years of local standing) must bear some of the blame for the state of things, for accepting the crumbs thrown our way by banks, big retailers, the City of Philadelphia and many an elected official.

The good news is the neighborhoods of Germantown are continuing on the up and onward, chivvied by the vanguards of an impatient citizenry that gets it that it's time to demand better – from themselves as well as from the usual suspects in the power pageant of urban America. There are currently a number of activist-minded commercial developers trying their best, putting money where their mouths are and making a go of it.

I am not daring anyone to do anything. The fantasy elements here are not lost on me. There simply aren't in place (or on the horizon) the will, the money or the vision for a great Germantown renaissance a la Williamsburg. I'm close to admitting to myself that way too many of my friends and neighbors are OK with what we have here. I know that there are decent, solid business owners who may take offense at what I write, but that is not my intention.

I don't know about all of you at the other end of this piece, but it still does me a world of good to remember that almost anything is possible in the public realm. It is still a scant eight years or so since a young man from a less-than-promising upbringing, the son of a single mother not always in funds, became the first African American president of this, our favored land. A wised-up Germantown needn't look far back over its shoulder to figure out that we have something very special here. Few places in the nation have what we see out of our windows. It is worth preserving. So ends today this retailing of one man's hopes.

John O'Connell, a Chestnut Hill resident, is a Realtor at Elfant Wissahickon Realtors. He was born and raised in Germantown.

West Highland Ave property an example of the ordinary worth saving

Planning for the next 25 years of Jenks Children’s Park

Violent crime must remain an ‘outlier’