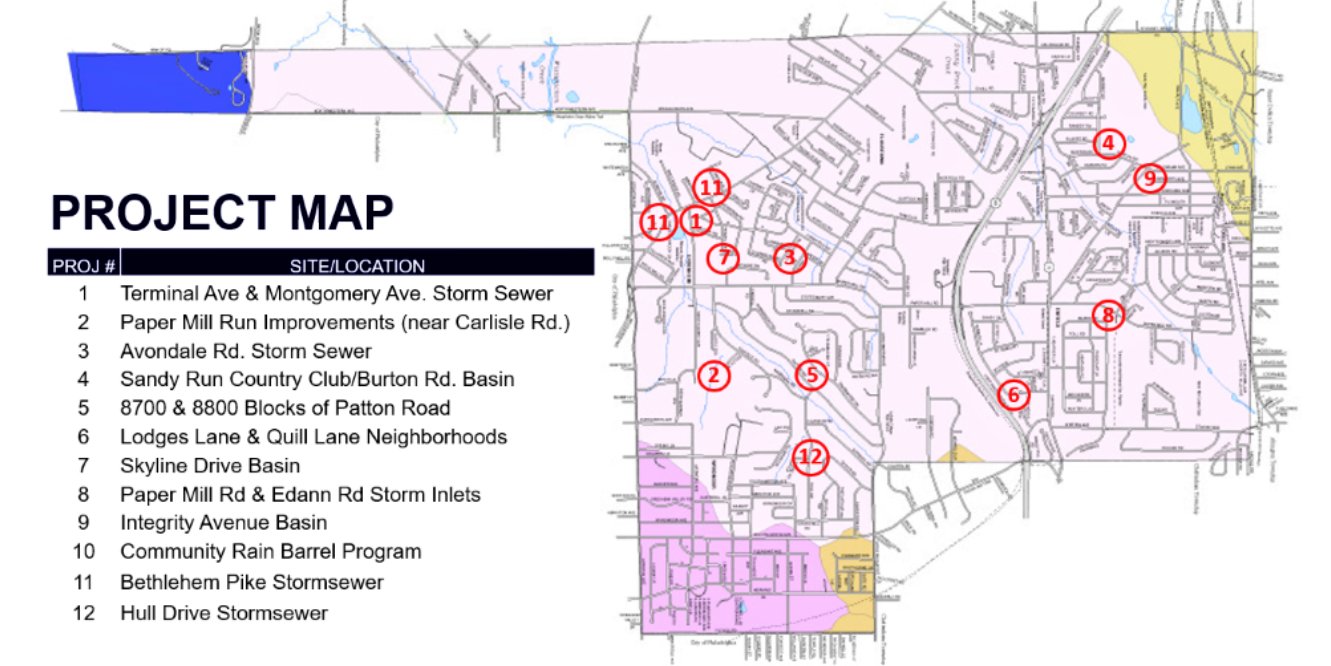 New construction project proposals include a new storm sewer and inlets along Avondale Avenue from Longfield Road to Glendalough Road, streambank stabilization and construction of check dams and detention basins along the Paper Mill Run near Carlisle Road, land acquisition and construction of a naturalized stormwater retention basin at the 300 block of Integrity Avenue, and a new storm sewer line along the 8300 and 8400 blocks of Hull Drive.
Posted Thursday, October 21, 2021 6:00 am
by Betsy Wallace

Specific plans for improving existing storm water systems include extending the storm sewer at Montgomery and Terminal avenues, fixing the existing detention basin on Skyline Drive to facilitate greater stormwater retention and create a naturalized area to enhance water quality, and retrofitting the inlets on Papermill and Edann roads to increase the stormwater capture rate.To reduce flooding on Bethlehem Pike and surrounding areas, the township will have to petition state Department of Transportation to upgrade the curb-to-grate storm sewer inlets and install a larger capacity system.

The Sandy Run Country Club, the township, and the owners of flood-prone properties on the 400 block of Burton Road have been working together for almost a year to plan significant expansion of the existing detention basin, tree planting, and rain garden installations on the golf course property, as well as better connections between the basin and the existing storm sewer on Burton Road. The Board of Commissioners voted unanimously to approve this project at its business meeting on Oct. 13.

New construction project proposals include a new storm sewer and inlets along Avondale Avenue from Longfield Road to Glendalough Road, streambank stabilization and construction of check dams and detention basins along the Paper Mill Run near Carlisle Road, land acquisition and construction of a naturalized stormwater retention basin at the 300 block of Integrity Avenue, and a new storm sewer line along the 8300 and 8400 blocks of Hull Drive.

Stronger code enforcement of private stormwater management systems maintenance on Trumbauer Road and on Shepard’s Way would reduce flooding on 8700 and 8800 Patton Road and in the Lodges and Quill Lane neighborhoods, respectively, officials said. Commissioner Peter Wilson suggested installing rain gardens in Fulginiti Park in Flourtown as another project.

The Board of Commissioners asked that Ford report back next month on the estimated cost for the proposed projects. Federal funding is available.

The state of recycling in Springfield Township

Wilson reported at the business meeting that in September 2021, the township recycled 205 tons of single-stream recyclables at a net cost to the township of $10,938. The household participation rate was 61.3%. With plastics recycling in a state of flux nationwide, the township is now paying every month for recycling instead of gaining profits from the sale of its recyclables. The township budgeted about $411,000 for net recycling costs in 2021. For the year to date, it has paid out about $196,000, well below the budgeted amount.

In response to a resident’s question at the workshop meeting about whether J.P. Mascaro & Sons is still the township’s recycler, Township Manager Michael Taylor said that there is an existing contract with Mascaro for all phases of recycling but that the township decided to break up the distinct phases of recycling and receive separate bids for each one, which will hopefully drive down costs. The township is currently accepting bids.

Commissioner Jeff Harbison announced that Ross Gibby, the Chief Operating Officer of Center for Regenerative Design and Collaboration (CRDC Global), will give a presentation at the EAC October meeting on his company’s manufacturing project, which mixes non-recyclable and recyclable plastics (Resins 1-7) with cement to make Resin8 blocks for building and construction.

In September, CRDC Global and the Alliance to End Plastic Waste announced the development of a 14,000-square-foot Resin8 manufacturing plant in York, Pennsylvania. The EAC meeting is scheduled for Oct. 27 at 7 p.m. in the Township Administration Building.

Resolving the problem is complicated by the fact that Stenton Avenue is a state road, which means that PennDOT will need to be involved. The traffic lights along Stenton are owned by the City of Philadelphia. Stenton Avenue at Gravers Lane is also the dividing line between Philadelphia and Springfield Township.

The commissioners and residents discussed trying to get red-light cameras installed covering both north- and southbound traffic. This would require applying to PennDOT for permission to install red-light cameras based on a traffic study. If PennDOT grants permission, then the City of Philadelphia would have to install the cameras.

Taylor promised that either he or Police Chief Michael Pitkow will write to Philadelphia officials, asking that they consider doing the necessary traffic study.

All meetings will be held in person at the Springfield Township Administration Building, 1510 Paper Mill Road, Wyndmoor. Masks are required.