Brandon Walters (right) as Christopher Mahon and Melody Ladd as Margaret “Pegeen Mike” Flaherty, in Quintessence Theatre’s production of “The Playboy of the Western World.” (Photo by Shawn … 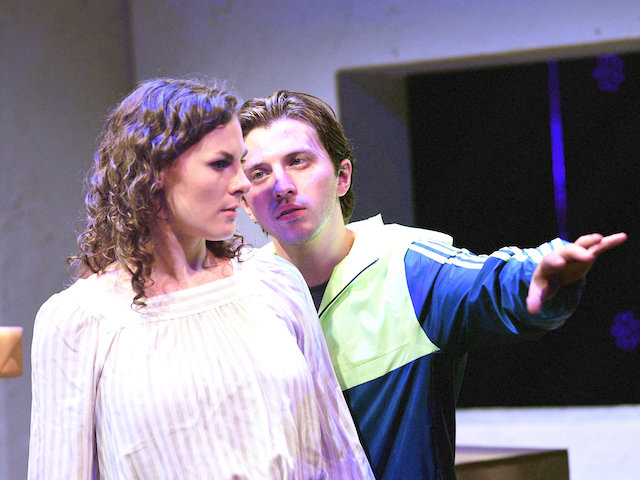 Brandon Walters (right) as Christopher Mahon and Melody Ladd as Margaret “Pegeen Mike” Flaherty, in Quintessence Theatre’s production of “The Playboy of the Western World.” (Photo by Shawn May)[/caption]

If you do not see another play all year, at least treat yourself to “The Playboy of the Western World” (1907), which headlines The Synge Festival, now running at Quintessence Theatre in Mt. Airy through the end of October.

The Synge Triptych is a fully-staged production consisting of three of Irish playwright J.M. Synge's short plays performed in one evening. The Triptych consists of Synge's "Riders to the Sea," "In the Shadow of the Glen" and "The Tinker's Wedding." These plays are fully staged and produced, and will run in rotating repertoire with "Playboy." On festival weekends, Quintessence will be presenting recitations of Synge's "Deirdre of the Sorrows" and "The Well of the Saints," as well as two full productions of "Playboy" and "The Triptych."

Brandon Walters stars in the “Playboy” role of Christopher Mahon, handsome and enigmatic, a curiously delicate ruffian in exile from his native village. Synge’s masterpiece opens with one of the most audacious set-ups in all theater: Christopher is in flight because he murdered his “Da” (father), yet the rough and tumble peasants on the wild west coast of Mayo welcome him as a hero.

Melody Ladd is outstanding as young pubkeeper, Pegeen Mike. Her riveting, trademark stare mixes surprise with indignation and is truly unforgettable. Pegeen prefers Christopher to her milquetoast finance, Shawn (Christopher Morriss), but she soon has a potent rival in the Widow Quin (Megan McDermott), a saucy, desiring woman who hunts down the playboy as though she were tracking a wild animal.

Christopher cannot believe his good luck: “Well, it’s a clean bed and soft with it, and it’s great luck and company I’ve won me in the end of time – two fine women fighting for the likes of me – till I’m thinking this night wasn’t I a foolish fellow not to kill my father in years gone by.”

Such poetic lyricism is one of the most striking aspects of “Playboy.” Anglo-Irish Synge grew up in Dublin but sojourned in western Ireland to study rural speech and folkways. Director Burns wisely includes a centerfold glossary of some 50 words and phrases that capture the exoticism and charm of the play’s Hiberno-English.

Yet the Irish theater revival in 1900 coincided with the awakening of revolutionary politics, and many partisans were offended by the celebration of Irish English in “Playboy”; they saw it as a betrayal of the country’s Gaelic roots. Singe’s portrayal of the rural Irish is not entirely flattering either, and there were riots when the play was first performed (as there were at the premiere of Sean O’Casey’s “The Plough and the Stars”).

But it is precisely the mix of celebration and ridicule that makes the tragicomic irony of “Playboy” so Irish and so distinctive. The play’s delightful unpredictability is the theme: What values are in charge here? We hear about, but do not get to meet, Father Riley and the influential Catholic church. At the same time, the peasants crave a transcendent hero of primal sexual and warrior vigor. What is heroic, anyway?

Quintessence Theatre is located at 7137 Germantown Ave. “The Playboy of the Western World” and “The Synge Triptych” will run through Oct 27. For ticket information, visit QuintessenceTheatre.org or call 215- 987-4450.