The incessant popping sound of the perforated plastic ball being struck back and forth by geriatrics with wooden paddles is enough to drive anybody who lives in proximity of a pickleball court crazy. 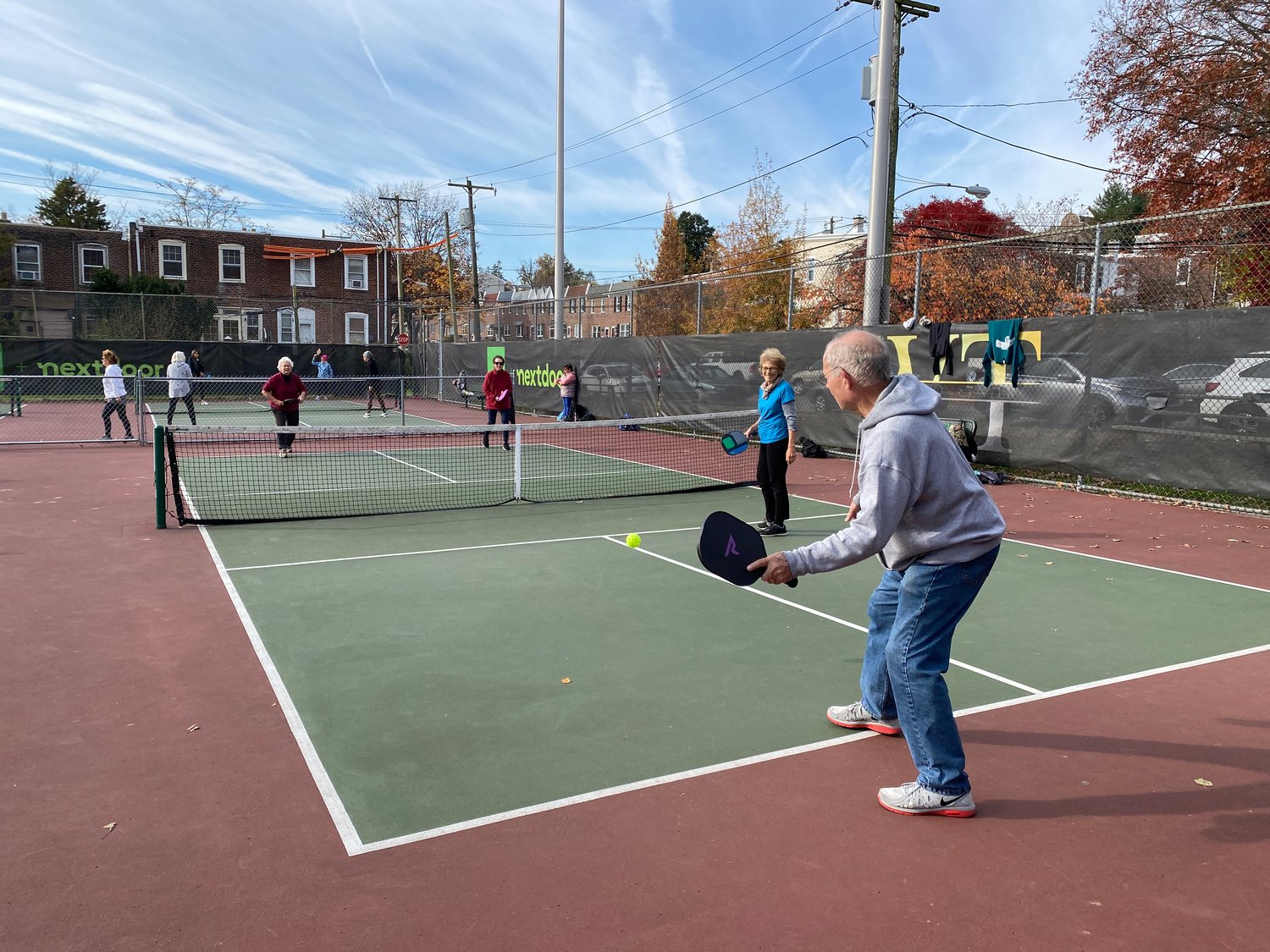 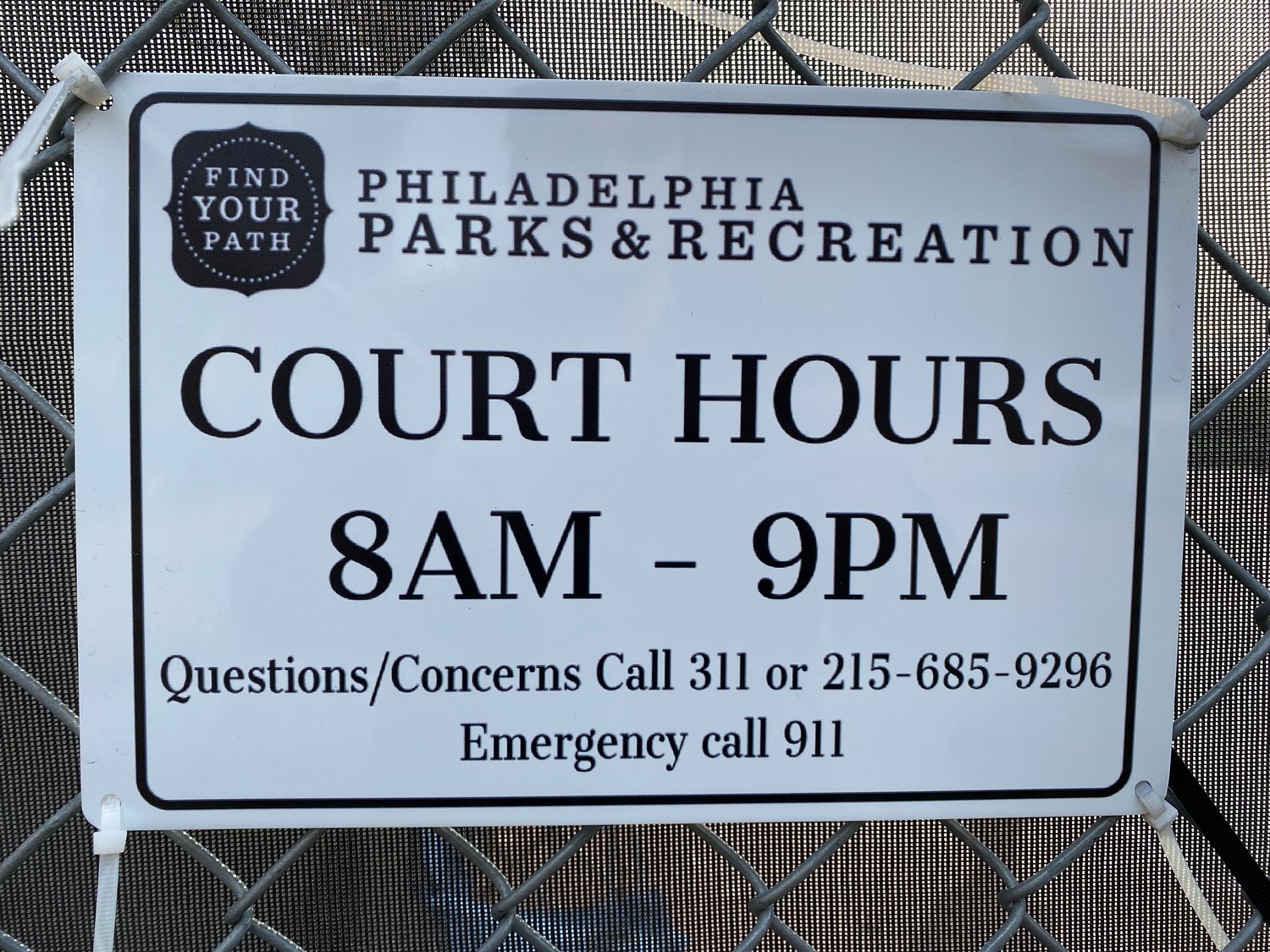 A sign had to be added noting the pickleball court’s hours after people were arriving at the court as early as 6:30 a.m., Water Tower Advisory Council president Keith Kunz told the Local.
Tom Beck 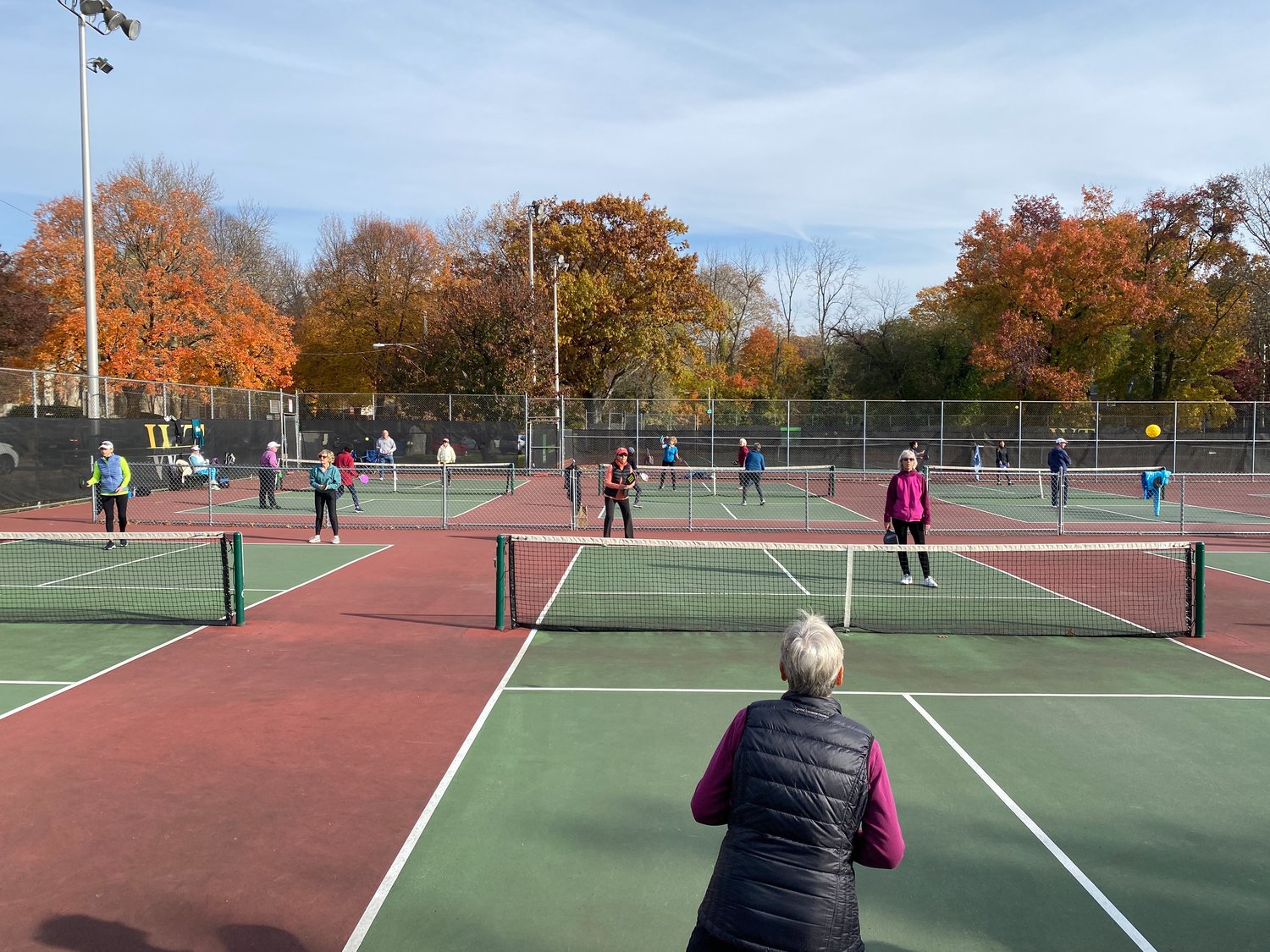 According to the USA Pickleball Association, the sport has grown by a rate of 21.3 percent to 4.2 million players from 2019 to 2020.
Tom Beck 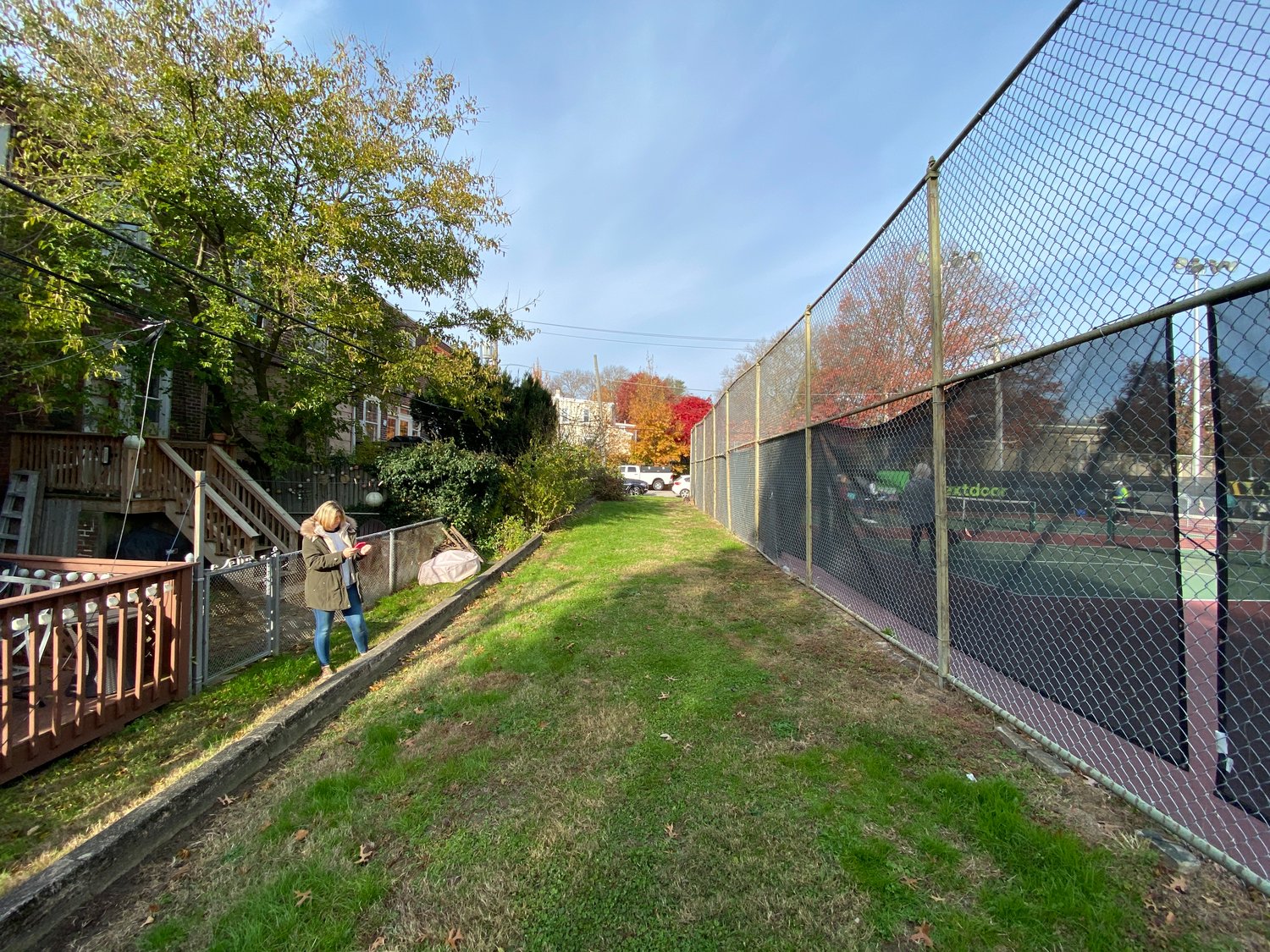 Only 14 feet separates the pickleball courts from the backyards of properties along the 8100 block of Ardleigh Street.
Tom Beck
Previous Next
Posted Thursday, December 2, 2021 6:00 am
by Tom Beck

Over the past decade or so, a new racket sport has been rapidly sweeping the nation, growing in popularity and introducing its hybrid brand of tennis and ping pong to children, adults, and especially seniors, all across the country. The sport’s growth isn’t stopping anytime soon, in part because it’s fun, inexpensive and easy to learn.

The sport is called pickleball, and it’s coming, if it hasn’t already yet, to a public space near you - which has been already been a problem for residents in towns across the continent, including Berkeley, California; York, Maine; North Saanich, British Columbia; Squamish, British Columbia; Ridgewood, New Jersey; Provincetown, Massachusetts; Maui, Hawaii; West Linn, Oregon and State College, Pennsylvania.

And now it’s a problem in Chestnut Hill. More specifically, it’s a problem at the Water Tower Recreation Center, where it is annoying the heck out of nearby neighbors. It’s not the sport itself that they object to. It’s the noise that it creates.

“When that ball hits, there’s a sharp crack,” said Chestnut Hill resident Marie Cavagnaro, who lives right behind the Water Tower’s pickleball courts along the 8100 block of Ardleigh Street. “When you’ve got six courts worth of people playing, it’s constant.”

The incessant popping sound of the perforated plastic ball being struck back and forth on either side of the net by geriatrics with wooden paddles is enough to drive anybody who lives in proximity of a pickleball court crazy. Even Dona Odell, a resident who lives all the way on the other side of Winston Street.

“The noise has been an issue for anybody who wants to keep a window open ever,” said Odell, who lives, more specifically, on the 8000 block of Winston. “I have really nice privacy plantings so I can sit out front if I want to, but it's way too noisy.”

And just like that, pickleball came to Chestnut Hill. Then it saw. And boy did it conquer.

Four-time national pickleball champion Dan Wheeler, who is also the former leader of a group called the Northwest Philly Pickleball Group, is Chestnut Hill’s pickleball progenitor - the man behind getting the pickleball courts put in at Water Tower. He lobbied Bass for the courts after his group was kicked out of its regular spot at Pleasant Playground in Mt. Airy due to nearby construction shutting down the court.

The Local asked Wheeler whether he ever considered the fact that noise from pickleball players could at some point cause excessive levels of perturbation among residents in nearby houses.

“I’d certainly thought about it,” he said. “I was aware that in 2010 there was a community in Tucson, Arizona where neighbors complained about living close to the courts and they ended up getting pickleball shut down.”

But nobody predicted how much pickleball would grow as a sport, especially during the pandemic. According to the USA Pickleball Association, there are now more than 4.2 million people playing pickleball throughout the country as of last year, representing a more than 21 percent increase since the year before.

“It seemed innocent at first,” said resident Sarah Robinson, who also lives close to the courts. “but this year there’s been this explosion of pickleball players. At eight in the morning they’re out there, and the volume of pickleball is loud.”

Robinson and Cavagnaro both live on the 8100 block of Ardleigh Street, right behind the pickleball courts, so they’re most affected by the noise. But even residents further away can hear the noise loud and clear.

“I’ve never seen people getting so riled up,” said Odell. “It’s disturbing. It’s interfering seriously with the quality of life on Ardleigh Street and to a lesser extent on Winston.”

According to Spendiarian & Willis, a company that provides consulting services concentrating on architectural and environmental acoustics and noise control, pickleball courts are recommended to not be placed within 500 to 600 feet of residential homes.

The Water Tower’s pickleball courts, however, are located just 14 feet from the property line of homes along the 8100 block of Ardleigh. The Local confirmed the distance with measuring tape.

In addition to the loud noises of the ball striking the paddles, neighbors have complained that the players themselves can be loud and unruly.

“A lot of people used to play tennis here, but they did it quietly and they talked quietly if they talked at all,” said Odell. “Because pickleball is not a super athletic game, it’s not terribly hard and because of that they talk all the time. And they scream the score.”

Neighbor Joe O’Donnell, who lives behind the courts on Ardleigh, says that many of the more advanced pickleball players get so into their competitions that they swear - very loudly and very excessively.

Residents say the noise didn’t really become as unbearable as it currently is until during the pandemic.

“That’s when it really got busy,” said Cavagnaro. “Slowly it took over and there would be people there in the day and the evening.”

Since then, residents have been searching for solutions. One potential remedy they’ve discussed with the rec center is reducing the hours of the courts from 8 a.m. to 9 p.m. to 9 a.m. to 8 p.m. But Keith Kunz, president of the Water Tower Recreation Center Advisory Council, warned that if the gates were locked at night, there’d be no one to unlock them in the morning since the rec center doesn’t open until 2 p.m . So that’s a problem that would have to be sorted out.

The current signs at the courts, which instruct people not to use the courts before 8 a.m., had to be put up because people were showing up at 6:30, said Kunz.

“We are trying to work with both groups,” said Kunz. “At the time [we had the pickleball courts installed], nobody really knew about the problems with the noise.”

Will Careri, spokesperson for Bass’s office, said that changing the hours of the court is “most likely one of the solutions that will be implemented immediately.”

Another potential solution neighbors suggested was the potential purchasing of Acoustifence, a sound dampening material that attaches to the existing cyclone fence, to line the court with.

Careri and Kunz say the Acoustifence option is also being pursued.

Peggy Bradley, a leader of one of the pickleball groups that uses the courts, said that her group committed a sum of money to put toward acoustic fencing for the court. She declined to say the specific amount.

“We’re very aware of the disruption to the neighbors,” said Bradley, who is sympathetic to neighbors’ concerns. “I understand their anger and frustration. If it was my house, and I could not use my deck or backyard because of the noise, it would be a problem.”

Bradley is also on the rec center’s advisory council.

“When they put [the pickleball courts] in, I don’t think anybody had any idea how loud it would be,” she said. “We realize it’s a problem.”

Bass weighed in on the controversy as well.

“Our recreation centers provide a valuable resource for our community members, but we all must work together in rare cases such as this,” she said in a statement emailed to the Local by Careri. “We are working with the community, recreation center staff and pickleball players to ensure all voices are heard. Our goal is for all to get the most out of what Parks & Recreation has to offer while not creating a nuisance for neighbors. We can and will do better.”

In an effort to mitigate residents’ concerns, Careri told the Local that the three pickleball courts closest to Ardleigh Street would be closed during the winter.

At least some, including Wheeler, are remaining optimistic about the situation amid the controversy.

“I think a solution could be found that will satisfy both sides,” he said. “Hopefully they can reach that.”