PC grapplers back on the mat, in a new facility

Penn Charter wrestlers are now headquartered in the school's new Graham Athletics and Wellness Center. As at other schools, the missing year has contributed to a significant change in personnel.

PC grapplers back on the mat, in a new facility 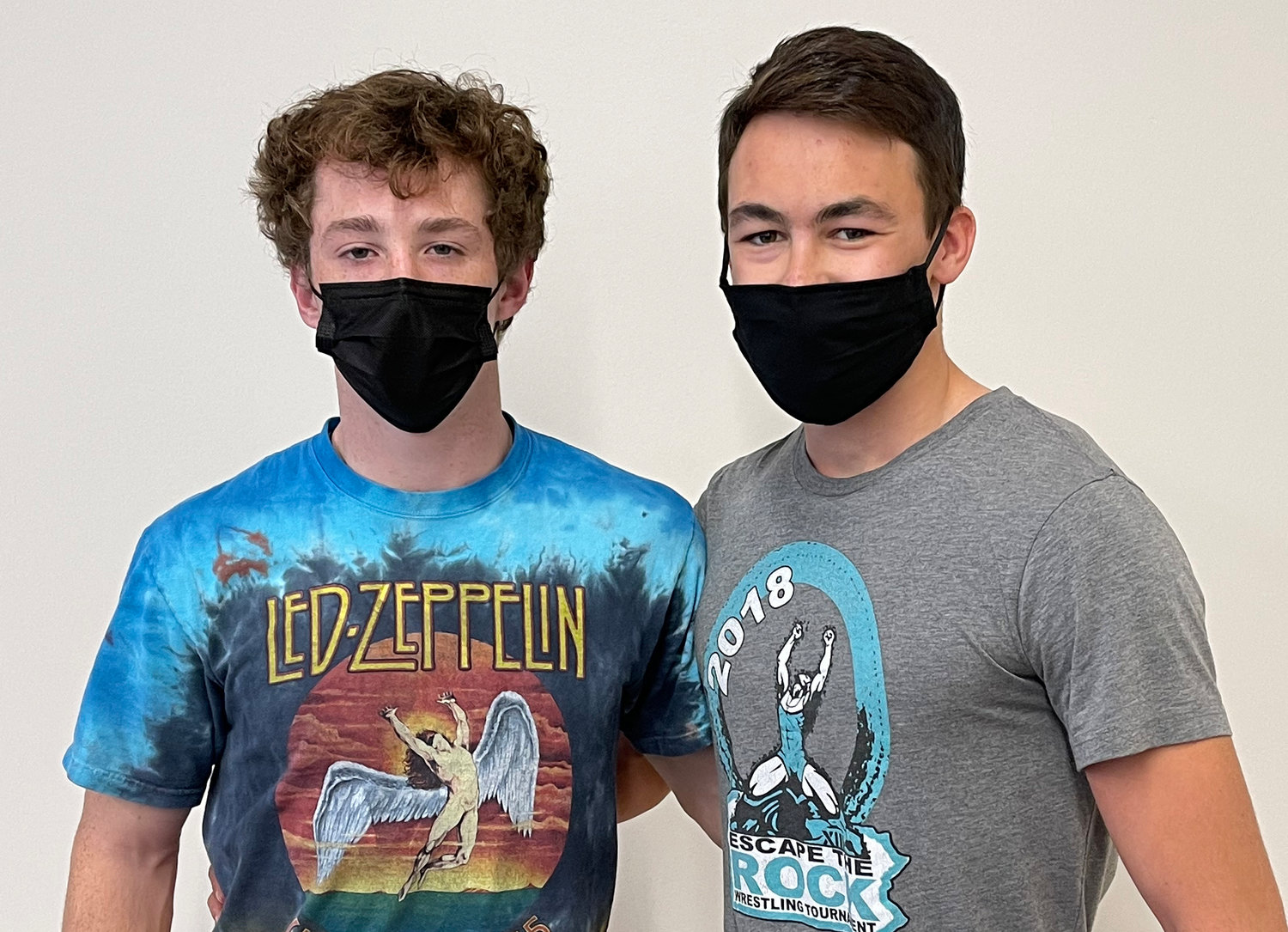 Matt Calahan (left) and Tyler Mangan are the two current seniors who took part in Penn Charter's last wrestling season in 2019. Tyanna Kelly (missing from photo) is the third senior on this year's team.
Tom Utescher
Posted Tuesday, December 14, 2021 6:00 am
by Tom Utescher

After COVID-19 restrictions quashed the interscholastic wrestling season in 2020-21, the grapplers are back in action at Penn Charter, and now they're headquartered in the school's fabulous new Graham Athletics and Wellness Center.

As at other schools, the missing year has contributed to a significant change in personnel in the wrestling room; only six current Quakers were active on the team in 2019-20.

The two seniors in this group are Matt Calahan and Tyler Mangan, who will likely wrestle in the 152 and 160 lb. weight classes, respectively. Junior George Glomb will compete at 170 and his brother James will wrestle up at 182. The brothers compose two-thirds of a set of triplets that includes Alexa Glomb, who plays field hockey, squash, and lacrosse at Penn Charter. The other two wrestling team holdovers are junior Pat Rullo (another middleweight) and sophomore Jack Bowen, who is in the 145 lb. class. In addition to the juniors already mentioned is Ryan Egan, who is currently out of action with an injury.

Other 10th-graders joining Bowen in the crowded middle section of the weight spectrum are Michael Filoon and Eian Kilpatrick. Fellow 11th-grader Devon Felsenstein will not be in the room as frequently, as he is also a competitive gymnast. The other sophomore on the team is heavyweight Owen Larrabee, the son of PC faculty member and former golf team coach Travis Larrabee.

The third senior on the roster this season is middleweight Tyanna Kelly, one of two girls on the roster along with freshman Mariah Mays, who played tennis for the Quakers this fall. Female wrestling is the fastest-growing segment of the sport, according to an effusive Pete Shaifer, PC's veteran head coach. Looking toward the future, he spoke enthusiastically about a group of rising middle school girl grapplers that includes eighth-grader Cassidy McCusker, who has already appeared in national competitions presented by the NUWAY wrestling organization.

To fill lighter weight classes this season, the Quakers will look to some promising freshmen. Henry Greenberg and Griffin LaMent could go at 106 and 112 lbs., and Shaifer is looking at Grey Catlow-Sidler (who has also competed in national events) at 126 lbs. and Hugh Maley at 132. Maley has three older sisters who have been accomplished athletes at Penn Charter, as well as one who played soccer at Archbishop Wood.

In the mix at 138 lbs. is another ninth-grader, Leo Prichett. Fellow freshmen Garrett Mathias, Munir German, and Gavin Ruta have athletic ability, but need to gain some more wrestling experience.

Shaifer has cast a wide net to acquire assistant coaches for the program. Among those currently on board are former Germantown Academy wrestler Eric Corliss ('15) and Temple University business professor Matthew McConnell.