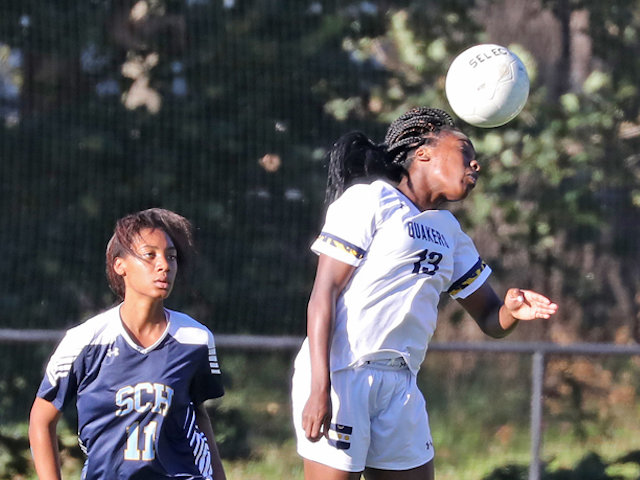 As in their September meeting on opening day for the 2018 Inter-Ac League girls’ soccer campaign, Penn Charter held 1-0 lead over Springside Chestnut Hill Academy in the middle of the second half in last Friday’s rematch.

In the first encounter, visiting SCH had tied the game at 1-1 and that proved to be the final score after the standard 10 minutes of overtime. This time, the second goal of the game was deposited by the PC Quakers, and although the host Blue Devils got on the board with a little over five minutes remaining, Charter came away with a 2-1 victory.

In the Inter-Ac standings, PC had been trailing league leader Germantown Academy at the start of the week. At that juncture, GA’s 5-0 start translated into 15 points in the rankings, while PC, with that tie against SCH, was 4-0-1 (13 points).

Last Tuesday the Quakers and Patriots went head-to-head for the first time and Charter routed GA, 8-3, to edge into the lead in the Inter-Ac. Junior Sara Shipon scored a hat trick in the Quakers’ offensive outburst, and there were two goals apiece from leading scorer Janae Stewart and her sophomore classmate, Kait Haughey.

On Friday, the Penn Charter victory widened the gap between the two teams by an additional three points on the Inter-Ac leaderboard, since on the same afternoon Germantown lost a road game, 3-1, to defending league champion Episcopal Academy.

While PC now had 19 points to the Patriots’ 15, Friday’s results evened out Springside Chestnut Hill’s record at 2-2-2. The Blue Devils’ league point total of eight remained unchanged from the previous week, since last Tuesday they stepped outside the Inter-Ac to defeat Princeton Day School, 3-2.

SCH still has to make up its first scheduled meeting with the Academy of Notre Dame, which was rained out on September 25. The Devils tied Episcopal 1-1 on October 2, and are just behind the Churchwomen (3-2-1, 10 points) in the standings.

Members of the Penn Charter and SCH squads each know the major players on the other side, with some of the girls even playing on the same club teams outside of school. There would be no scoring spree such as in the PC-GA set-to, and in the first half the Blue Devils and Quakers battled one another to a scoreless stalemate.

Although SCH graduated three important players on the defensive side from 2017, Coach Kosmin stated “I’ve been really comfortable with my defense in most of our games.” 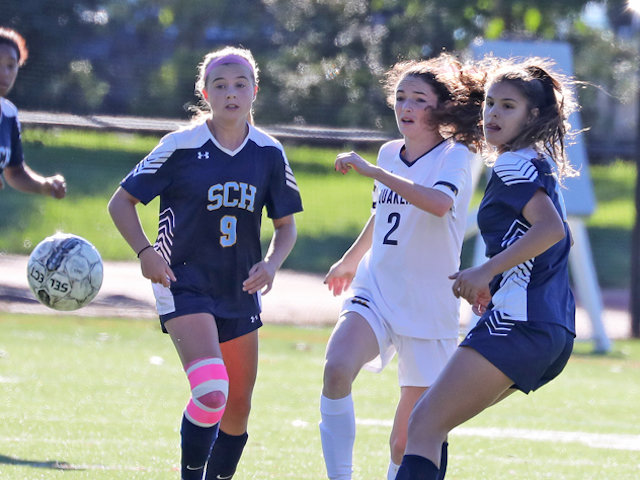 For the first time in several weeks, the Blue Devils were able to play each of their two goalies for half the game. Senior Sena Houessou-Adin usually starts and then turns over the cage to sophomore Julia Wilbekaitis, but Houessou-Adin had been sitting out for a spell due to a concussion.

The senior demonstrated that she was already back in good form with an important save with a dozen minutes remaining in the first half, when she rose up to grab the ball in front of the goal after a very well-placed aerial corner kick by the Quakers.

“She was excited about this game,” Kosmin said. “She did really well in practice this week and showed she was ready to come back.”

Most of the play was in the middle of the pitch early in the second half. PC senior Ally Paul directed the ball into the box from along the left endline, but Springside blocked the pass and cleared the ball out. SCH’s Wilbekaitis made a routine save on a shot by the Quakers’ Shipon, and at the far end of the field a promising attempt from near the right endline by SCH freshman Lauren Sullivan sent the ball skimming over the crossbar.

Back down the field, Wilbekaitis made a good stop on a strong low shot by PC’s Toni Linus, a lanky junior who is the team’s primary scoring weapon on balls in the air. She would employ her height later in the game.

About 15 minutes into the second stanza, PC was up on offense and junior defender Abbie Rorke of SCH chipped the ball out of the box. Pushed up the field from the defense, sophomore Kaitlyn Hnatkowsky served the ball back inside for Penn Charter, and players converged on the SCH goalcage. Stewart was able to run onto the loose ball and fire a shot that deflected up off the hands of Wilbekaitis and under the crossbar. The visitors now had a 1-0 lead with 24:41 left in the second half.

“Janae works really hard to create chances for herself and for her teammates,” Coach Spencer commented. “Springside didn’t give her a lot of space, so it was nice to see her find a way to finish.”

Two minutes later, Springside Chestnut Hill eighth-grader Louie McIntyre slipped a pass through to freshman Maya McDermott making a run into the right side of the box, and the resulting shot tracked high and wide of the top corner on the near side. A little later the Quaker defense cleared the ball out on an accurate corner kick by the Devils’ Sullivan, who then went back on defense and headed away a nice cross by PC’s Paul.

The action continued to range from end to end. Hnatkowski stopped an SCH attack after another of the Devils’ eighth-graders, Bella Torres, served the ball in from the left wing. PC reversed the flow for a free kick at the other end. There was no shot just then, but a little later Stewart hit one that was stopped by Wilbekaitis.

SCH junior Maddie Niebish, a skilled scorer who recently shifted back to defense due to a teammate’s injury, delivered a pass up into the right side of the box, but sophomore JoJo McShane fired a little wide of the right post.

With the clock now under 10 minutes, the momentum remained fluid between the teams, and when Penn Charter earned a corner kick, senior captain Emma Maley put the ball in play from the left side. Both the serve and the head of Toni Linus were in the right spot on this play, and with 8:12 remaining the junior scored an insurance goal that would turn out to be the game-winner.

“Toni’s goal giving us a two-goal lead was important,” Spencer said. “We knew it would be tough to shut out Springside completely and we wanted a little cushion so we didn’t have another overtime game with them.”

SCH’s Torres made a solid attempt to get the home team on the board with seven minutes left, but PC’s junior goalie, Riley McDade, went to her knees to block the ball and then gather it in.

“Riley is aggressive and athletic in goal,” Spencer remarked. “She’s having a great year, and she has come up with some big saves for us.”

The Blue Devils were now having Niebish advance up the field on offense, out of necessity. This paid off with 5:23 on the clock, when she dribbled into the left side of the box and scored to make it a 2-1 game.

In the final minutes SCH applied a good deal of offensive pressure as it sought a tying goal, but PC’s McDade and her defense preserved their lead until the final horn.

“It was a good win for us; it was a very tough game and both teams played really well,” Spencer stated.

SCH’s Kosmin related, “All week we worked on our counterattack and finishing, and we did really well in practice. Today we had a lot of people who attacked and we were able to get behind the defense and create scoring opportunities. Sometimes in a game, people get in front of the goal and get nervous and freeze, and we don’t finish our chances. We’re a young team, and that will come. It’s a learning year.”

Penn Charter can now control its own fate to a large degree, but Spencer cautioned, “In our league you can’t get ahead of yourself – you can’t assume anything. You can beat a team the first time, but you have to learn that it means nothing the next time you play.”