Stephane Deneve, former principal guest conductor, led the Philadelphia Orchestra in its return to the Kimmel Center's Verizon Hall for a trio of concerts from Nov. 21-23. (Photo by Jessica Griffin) … 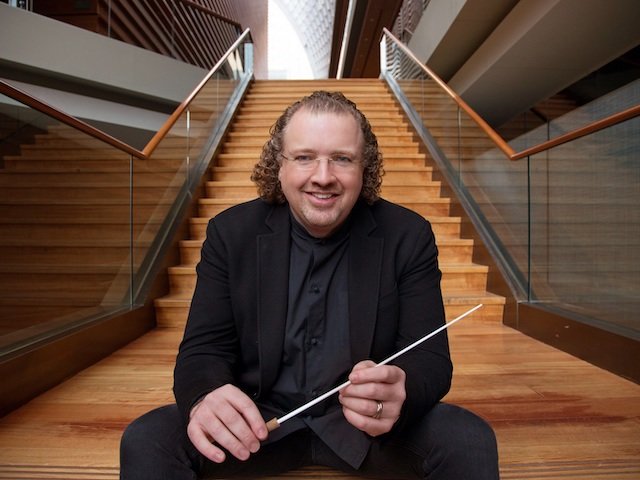 Stephane Deneve, former principal guest conductor, led the Philadelphia Orchestra in its return to the Kimmel Center's Verizon Hall for a trio of concerts from Nov. 21-23. (Photo by Jessica Griffin)

St. Paul’s Episcopal Church, Chestnut Hill, marked the culmination of the liturgical year with a Choral Evensong for the “Feast of Christ the King,” Sunday, Nov. 24. Established in 1925 by Pope Pius XI for the Roman Catholic Church, the celebration of “Christ the King” has been taken up in the Anglican Communion in its tradition of being “catholic and reformed.” Several Protestant churches also celebrate “Christ the King” on the final Sunday before the start of Advent, the season of preparation for Christmas.

Parish music director Andrew Kotylo chose a roster of choral music that presented a consistently modern musical language secure in traditional major/minor tonality. The “Magnificat” and “Nunc Dimittis” are movements from the “Evening Service in E” by Herbert Murrill, who lived from 1909 until 1952.

The anthem at the Offertory was “King of Glory” by David Hurd, who was born in 1950 and who is still alive today. The Introit, “O come, let us worship,” was composed by George Thalben-Ball, who lived from 1896 until 1987. The “Responses” were composed by Craig Phillips, born in 1961 and still alive today. Only the setting of Psalm 93, “Dominus regnavit” (“The Lord is King”), was written during the 19th century.

The connecting link between the music of all these choral works was an unbreakable connection between the original texts and the music they inspired. Murrill’s setting of the “Magnificat” projected the exuberant words of the Blessed Virgin Mary with pointed rhythms, surging melodies and sweeping harmonies.

His “Nunc Dimittis” glowed with the autumnal introspection of St. Simeon’s feeling of gratitude. Hurd’s “King of glory” trembled with personal commitment. And Phillips’ straightforward setting of simple liturgical texts turned them into profound expressions of an historical continuum 2,000 years in length.

All employed exemplary developmental techniques, complex imitative divisions of the parts of the choir, varied textures, and impressive counterpoint. Plus, all of the composers accompanied the choral singing with imaginative organ writing.

Glandorf will conduct Choral Arts Philadelphia, the Bach Collegium and Piffaro in a recreation of a Dresden “Vespers” Tuesday, Dec. 31, at 4 p.m. in the Episcopal Church of the Holy Trinity, Rittenhouse Square. Heinrich Schutz’s “Christmas Historia” and “Magnificat” are the principal scores.

Following a two-week break for an Asian tour, the Philadelphia Orchestra returned to its home base – the Kimmel Center’s Verizon Hall – for a trio of concerts Nov. 21, 22 & 23. The performances were conducted by Stephane Deneve, the ensemble’s former principal guest conductor, and featured an all-modern program.

The program’s major work was Stravinsky’s “The Firebird,” in the original full ballet score. Prior to intermission Deneve led the Orchestra’s first renditions of Lera Auerbach’s “Icarus for Orchestra” and Peter Lieberson’s “Neruda Songs.” Mezzo Kelley O’Connor was the soloist in the latter.

The most distinctive characteristic of “Icarus” is the composer’s use of the theremin, an electronic instrument that is played without human hands ever touching it and that has been used as a mainstay of film scores for science fiction movies. Boasting an incredibly wide range of dynamics and pitch, it proffers an otherworldly quality to the sound of an orchestra whenever it’s given a solo line. It also can be used to enhance the heft of a weak string section – which, of course, could never be said about the strings of the Philadelphia Orchestra.

“Icarus” came across Saturday evening as an attractive, well-made work of orchestral evocation without ever quite freeing itself from the suspicion that it was looking for a movie to accompany.

Lieberson chose five poems by Pablo Neruda for his song cycle, which was composed for and premiered in 2005 by his wife, mezzo Lorraine Hunt Lieberman. She died a year later, with the composer dying in 2011, giving the score an added sense of melancholy to that which the music, itself, projects. Set firmly in the tradition of orchestral song cycles by composers such as Mahler and Strauss, its melodic lines and supportive harmonies reflect and enhance the Spanish language of its texts, providing a sensuous gloss over its interior poignancy.

Both Deneve and O’Connor gave this revelatory work a gentle reading.

Deneve led the Philadelphians is a scintillating interpretation of “The Firebird.” Individual solo lines were efficaciously highlighted within the context of the shimmering textures and pulsating rhythms of Stravinsky’s first masterpiece. It ended with a particularly brilliant finale.

What's in a Name? A win-win for the arts