Mural artist Drew Montemayor following the completion of his West Highland Avenue mural. (Photo courtesy of Drew Montemayor) by Brendan Sample At first glance, the large gray area in the middle of … 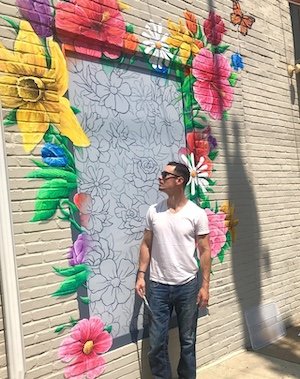 At first glance, the large gray area in the middle of the new mural on the side of the TruMark Financial Credit Union at the intersection of Germantown Avenue and West Highland Avenue might suggest that it is unfinished.

Titled “From The Grey Comes Growth,” it features a variety of uncolored flowers surrounded by a border of flowers with vibrant colors, as both elements distinctly contrast with each other. This is exactly the purpose of the finished painting, however, which was the result of a collaboration to bring a bit more vivacity to Philadelphia’s Garden District.

As the building manager of the credit union at 8500 Germantown Ave., Kim Crossett Neumann wanted to put up a mural that would further highlight Chestnut Hill’s Garden District status. She worked with local artist Drew Montemayor, who took Neumann’s idea and created a piece of art with a deeper meaning behind it.

“To me, the mural is about sitting in gray areas and feeling flat with anxiety and not a lot of life,” Montemayor said. “But in that moment, you can learn how to deal with it and maybe even realize that it can be the thing to propel you to give you the gift you didn’t even know you had. Beautiful life can grow from those tough things … Bringing struggles to the light can ultimately help you grow into your new self.”

Though it only took about five days for the mural to be painted, the entire process of getting it together was approximately a year in the making. The principal and creative director of Design Advocate, Neumann has lived in California for 30 years, but resided in Chestnut Hill until she was about 9 years old. Given that the specific section of wall already had a door frame, it seemed like an ideal place to put a new mural.

“I thought painting the wall would be a colorful solution to my lack of a green thumb,” Neumann explained. “Growing up in a family that really appreciated art and sculpture, I thought adding a mural on this wall would be a wonderful tribute to my parents, who own the building, and a great way to express our fondness for Chestnut Hill.”

After reaching out to several artists in and around the Philadelphia area, Neumann found one in Montemayor who both understood the concept and had the time and experience to complete the project. A freelance graphic designer and a part-time teacher who also runs his own business, he has lived in East Falls since 2011 and has experience designing brands, logos and websites for small businesses and start-ups, though this was his first time working with Neumann.

Montemayor recalled his childhood experiences in creating this mural, as he initially became interested in art when his mother encouraged him to communicate through drawings as he learned to read. He recalled being a bit dyslexic in his youth, which initially hindered his reading development, but it was through that hardship that he first discovered his calling. It is this message of breaking through life’s struggles that he hopes will resonate with others who see the mural.

The weather did prove to be a challenge while Montemayor was painting, as he had to deal with both heavy rain and plenty of sunlight that threatened to dry out his unused paint. Despite these difficulties, he ultimately enjoyed getting to paint outside and interact with Hillers who he hoped would later get to enjoy the finished project.

“I loved getting to connect with the people who I knew were going to see my art,” he said. “Sometimes I’m only interacting with a happy business owner, but people really lit up when they saw it. The mural was ultimately able to connect with them the way I intended it. Seeing that was really cool and kind of helped to solidify my purpose.”

Serving as both a symbol of Chestnut Hill and a metaphor for finding one’s true self, the new mural is sure to attract plenty of attention from both Hill residents and visitors alike.

“We hope local residents, as well as people coming to Chestnut Hill as a shopping destination and to enjoy its numerous events, will enjoy this mural and take pictures of themselves in front of it to fondly remember their visit,” Neumann said.

More information about Neumann and Montemayor’s businesses can be found online. Brendan Sample can be reached at brendan@chestnuthilllocal.com or 215-248-8819.