For GA girls' lacrosse, leadership on and off the field will be provided by (from left) assistant coach Katie Glanzmann, Charlotte Rapp, Olivia Doody, Lyndsey Morhardt and head coach Mary Dean. … 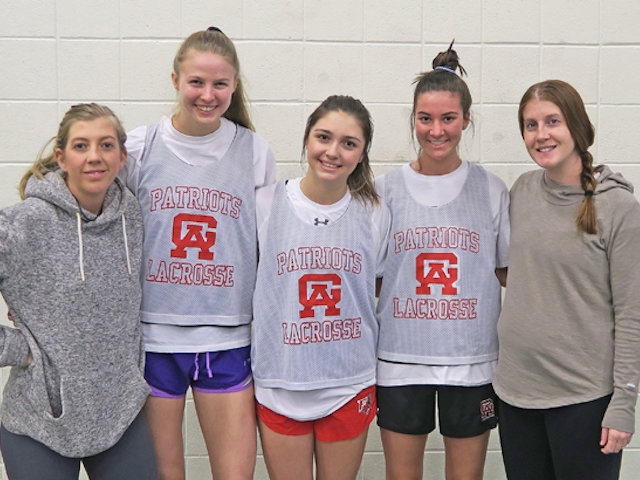 For GA girls' lacrosse, leadership on and off the field will be provided by (from left) assistant coach Katie Glanzmann, Charlotte Rapp, Olivia Doody, Lyndsey Morhardt and head coach Mary Dean. (Photo by Tom Utescher)

In area girls' lacrosse programs seniors seem to be relatively thin on the ground this spring, and in this regard, Germantown Academy has everybody beat. After graduating five players from last year's team, the lone senior on the Patriots' 2018 roster is midfielder Lyndsey Morhardt, who will continue her career at Elon University.

A lot of the younger players have varsity experience, though, and that's a comforting thought to new GA head coach Mary Dean.

Dean was a scholastic All-American at Cheltenham High School and then went on to play for Penn State, where she graduated in 2011. Not long after that she returned to head the program at her old high school, where she coached until last spring. She works at the Germantown Academy Child Care Center, so she is on the GA campus during the school day, and she's also a coach for the Triple H lacrosse girls' program, which is headed by Penn Charter's Colleen Magarity.

New varsity assistant coach Katie Glanzmann played for Pennington School and has been involved in the GA middle school program for several years. Zoe Torrey, the Patriots' 11th-grade goalie, will receive guidance from Jami Dansingburg, who has coached at Germantown Friends School and Springside Chestnut Hill Academy in the past.

Morhardt will share the duties of tri-captain with juniors Olivia Doody (who has made a commitment to Fairfield University) and Charlotte Rapp. They are joined by Torrey and four other 11th-graders, Gabrielle Hearn, Grayson Gross, Cameron Korman and Sophie Thatcher.

The Patriots will not be travelling as a team over spring break, but will remain in the area and hone their skills with an eye towards improving upon last year's fifth-place finish in the Inter-Ac League. Episcopal Academy, Agnes Irwin and the Academy of Notre Dame captured the top three places in 2017, with Penn Charter finishing just ahead of GA, and Springside Chestnut Hill and Baldwin School rounding out the list.