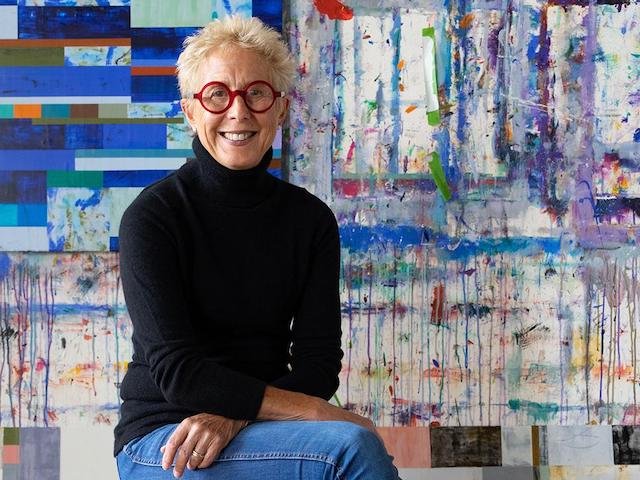 Val Rossman has been a highly regarded instructor at Woodmere Art Museum for four years as well as a fine abstract artist in her own right.

Val Rossman, who has been teaching at Woodmere Art Museum for four years, is a stunning abstract artist whose paintings are spatially complex and visually exciting. Joseph Rishel, retired curator at the Philadelphia Museum of Art, wrote in the catalogue for one of Rossman earlier exhibits, "...it's fun to see all her sophisticated manipulation of color. There's a lot of exploration going on in a seemingly contained format."

Within Rossman's vocabulary of geometric shapes, patterns and energetic calligraphy, reminding one of the dramatic shapes and angles in the works of Mondrian, Kandinsky, Jasper Johns and Paul Klee, color always takes the lead. Rossman has said that she thinks, plays and remembers in color, and through these paintings, she brings the viewer into her color-world of memories and observations.

Rossman’s latest works are currently on display through Nov. 30 at Gross McCleaf Gallery, 127 S. 16th St., second floor, with an opening reception on Friday, Nov. 8 from 5 to 7 p.m.

“Using abstraction allows me the freedom to depart from reality in order to express ideas and feelings more completely,” Rossman told us last week when asked why she does abstract instead of representational painting. “My artwork is always about the intersection between organization and planning and the interruptions of randomness and chaos. For me this is a perfect metaphor for life! I use colors, shapes, and lines to communicate these ideas.”

The native of Bala Cynwyd and Penn Valley, now in her mid-60s, attended Harriton High School on the Main Line.

“In high school I actually took two art classes each day!” Rossman said in an earlier interview. “However, I didn’t imagine that I could be an artist as a career. In college at Boston University I started out as a liberal arts major but quickly knew that it was the wrong choice. I had to reapply to the School of Fine Arts at BU and begin again as a freshman. I transferred to Tyler School of Art as a junior and graduated from there.”

Rossman received her BFA from Tyler and has held two Vermont Studio School residencies in recent years. She has had many solo and group exhibitions in the Philadelphia area and in other parts of the Northeastern U.S., and her work is included in numerous public and private collections. 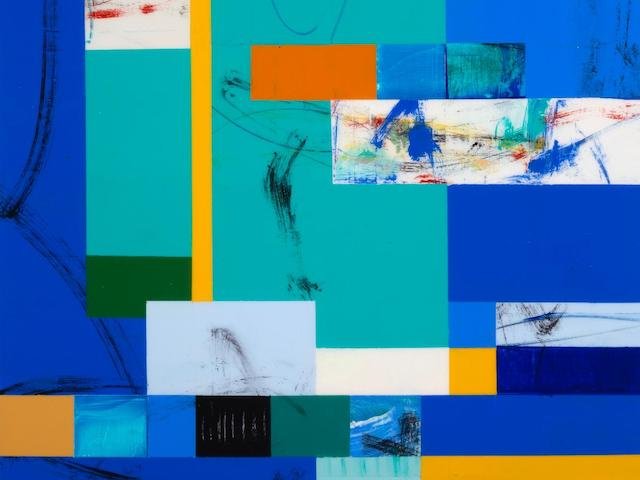 Typical of Rossman’s rich colors is “I Was There,” acrylic on panel, 14 x 14, which is in the current exhibit at Gross McCleaf Gallery.[/caption]

When asked what accomplishment she was most proud of, Rossman once mentioned, “It's the 11 medals I received for running 11 marathons. The connection to my art is that while training for marathons, I would often use the hours running alone to muse about my work. Both distance running and sustained art-making require the same mental discipline.”

When asked about the marathon running last week, however, the Woodmere instructor said, “Unfortunately I have given up running marathons due to old knees! But I still run four or five times a week, although quite slow! I also work out in a variety of classes where I am clearly the oldest person there!”

When asked last week how difficult it is to make a decent living as a full-time artist, Rossman replied, “Very difficult! One has to find another means to supplement one’s income.”

What was Rossman's most successful exhibit?

“My last one at Rosenfeld Gallery in 2015. I was very proud of the body of work, and I also sold the most of any previous show. I guess many others thought it was good, too!”

What is the hardest thing Rossman has ever done?

“Difficult question. Actually I think balancing life as an artist, mother and wife … it is a never ending quest!”

What is the best advice she ever received?

“Two things. First, try to limit your debt, and secondly, as an artist, follow your heart. Don’t be afraid of change.”

If Rossman could meet and spend time with anyone on earth, who would it be and why?

“Probably Georgia O”Keeffe or Helen Frankenthaler. It would be amazing to have the chance to talk about art with these great women.”

Rossman would also like to publicly thank her husband, Louis.

“He has been the most avid supporter of mine throughout our 45 years of marriage. His encouragement, kindness and pride have been a huge source of sustenance for me. I don’t think I could have achieved what I have without him! I also thank my children and grandson. They keep me honest and inspire my inner child to flourish.”