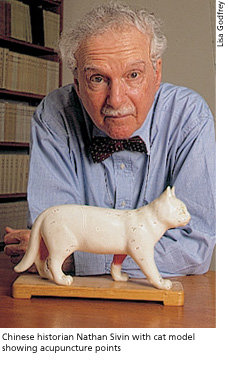 Nathan Sivin (1931-2022), a Hill resident for over 40 years with his wife Carole Sivin (1936-2020) since 1977, died June 24 at the age of 91 in their home on Roanoke street overlooking Pastorius Park. His beloved wife preceded him in death Dec. 30, 2020. Previously, they also lived together in Taiwan, Singapore, Kyoto, and Cambridge, Massachusetts. They spent most of the hot Philadelphia summers between 1974-2000 at the Needham Research Institute, Gonville and Caius College, and St. John’s College at Cambridge University in England.

In 1931, Dr. Sivin was born in Clarksburg, West Virginia, and grew up in nearby Fairmont. By his own account, he had a mediocre education. But at the time, the Pepsi-Cola company gave two college scholarships in each state, one to a boy and one to a girl. Having received the highest college entrance score in his state in 1948, he was awarded this fellowship. It provided full tuition for any college that would accept him. In a recent interview, he spoke about this unusual start to what became an illustrious career: “Now I knew nothing about colleges but when I asked a chemistry teacher where I should go she really didn’t know much about colleges but she suggested MIT so I applied there and they let me in, I suppose because I had the scholarship.”

He started his academic training at MIT as a chemistry major in 1948, but sometime in 1951 during the Korean War he left college and joined the U.S. army. By the time his basic training was completed, however, the Korean war was over. Seeking more challenges, he enrolled in the Chinese-language program at the Army Language School in California. This was his first introduction to Chinese culture. Shortly after completing the 18-month course in Chinese language, he recalled in an interview: “I was pleased to find out that MIT had begun a combined program called Science and Humanities, which meant I could graduate with relatively little work so it took me a year after I got out of the army to finish my MIT degree.”

The next year he received an SB in Science and Humanities (chemistry minor) at MIT (1958) and then he studied the history of science at Harvard (1962 MA, 1966 PhD). While working on his PhD thesis, Nathan and Carole married in Singapore in 1962. In Taiwan, he studied classical Chinese and philosophy with the Manchu prince Aisin Gioro Yü-yün (1961-1962), in Singapore he studied Chinese alchemy (1962-1963), and in Kyoto, he was a visiting professor at the Research Institute of Humanistic Studies (1967-1980).

While being promoted in his first academic position from assistant up to full professor of humanities at MIT (1966-1977), he also established what is now MIT’s prestigious Science, Technology, and Society Program. In 1977, Dr. Sivin was both elected to the American Academy of Arts & Sciences and accepted a new position at the University of Pennsylvania (1977-2006) as professor of Oriental Studies. This title was later changed to Professor of Chinese culture and the history of science. He taught a range of courses there from the Scientific Revolution in Europe and the sociology of professionalization to advanced classical Chinese and the history of science, technology, and medicine. He was appointed to no fewer than eight departments and programs.

He wrote or edited over fifteen books as well as numerous pathbreaking essays, many of which revolutionized the thinking in the fields within which he worked. The books include Chinese Alchemy: Preliminary Studies (1968); Copernicus in China, published in Japanese (1984); Traditional Medicine in Contemporary China (1987); Medicine, Philosophy, and Religion in Ancient China: Researches and Reflections (1995); The Way and The Word: Science and Medicine in Early Greece and China (co-authored with Sir Geoffrey Lloyd, 2000); Granting the Seasons: the Chinese Astronomical Reform of 1280, with an Annotated Translation and Study of its Many Dimensions (2008); Methodology of the History of Science (2011), published in Chinese by the Chinese Academy of Social Sciences, and Health Care in Eleventh-Century China (2015). [Full citations and links to many publications are on his website https://hss.sas.upenn.edu/people/nathan-sivin]

He also established the journal Chinese Science, which is now called East Asian Science, Technology, and Medicine and is the journal of the International Society of the History of East Asian Science, Technology, and Medicine. Upon retirement from Penn, he took emeritus status but continued to informally advise Penn and other graduate students, help newly minted PhDs and established scholars, and publish his own scholarship. Up until his final days, Dr. Sivin was completing revisions of what will be a major sourcebook for the history of Chinese medicine. Comprised of 120 translations of a wide range of texts on healing in China from the first century to the end of the nineteenth, it will be posthumously published.

He is survived by three sisters-in-law – Mary Sivin, Dolores Delmore Santandrea, and Judith Delmore Styrcula – and their families. His groundbreaking work lives on in the many students he generously mentored and the countless scholars around the world that he profoundly inspired.

In addition to being long-term Chestnut Hill residents, Nathan and Carole Sivin were also active members of the Franklin Inn Club in Philadelphia – Nathan being President from 1995 to 1997 as well as wine steward for another fifteen years. The Franklin Inn Club is the beneficiary of their estate and has devoted a reception room in their honor containing some of their furniture, many of Carole’s artworks, and photographs of them both.

Near their home, The Chestnut Hill Cat Clinic will exhibit some of Carole’s ceramic cat portraits and a Pastorius Park bench will have a plaque placed in their honor. His extensive library is going to the Humanities library at Tel Aviv University where it will be the basis for a research lab on the history of science and medicine in China. Both Carol and Nathan's archives are going together to the University of Pennsylvania.

A selection of the Sivin’s collection of scrolls, paintings, and seals will be put up for auction under Lots 149-169 at Freeman’s Asian Art auction Oct 18th: https://www.freemansauction.com/auction/1744-asian-arts/?au=5632

Additional donations in Dr. Sivin’s memory are being directed toward two funds established in his honor: a fund for graduate-student fellowships at the Needham Research Institute, Cambridge University, England and a junior essay award connected to the journal and society he helped establish. (Contact person Marta Hanson: mhanson4@jhmi.edu)

Nathan and Carole were fervent art, music, and cat lovers as well. They were generous, kind, and inseparable. All those whose lives they touched deeply miss them both.