Got a bird feeder? Take it down. 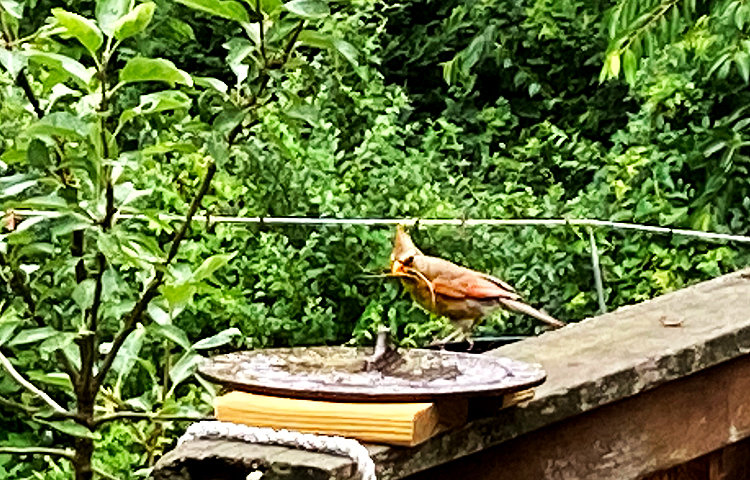 A mysterious illness has been ravaging songbird populations in the eastern United States. 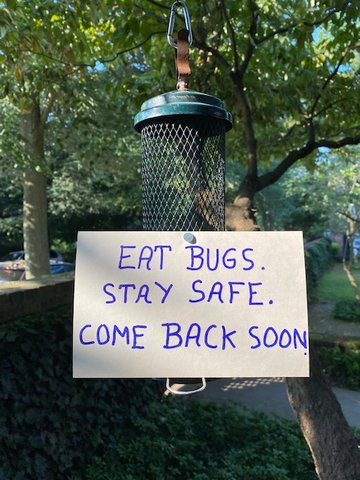 Until the source can be identified, birdfeeders and baths should be drained as a precaution
Previous Next
Posted Thursday, July 22, 2021 9:00 am
by John O’Donnell

Got a bird feeder? Take it down.

That’s the advice of the Audubon Society, the PA Game Commission, the Wildlife Futures Program (WFP) at The University of Pennsylvania’s School of Veterinary Medicine, and the Schuylkill Center for Environmental Education (SCEE). And if you think their recommendations are for the birds, you’re right.

A mysterious illness has been ravaging songbird populations in the eastern United States. Thousands of afflicted birds have been manifesting crusty discharge from swollen eyes and signs of neurologic impairment (erratic flight, trouble walking, tremors). Rehabbers are helpless; the prognosis is death.

First observed in the DC area in May and spreading into Pennsylvania by mid-June, the “event” is essentially a construct derived from thousands of unique reports of all types of avian morbidity and mortality. Natural resource management agencies in all contiguous, affected states and the District of Columbia are working together with diagnostic laboratories including Penn’s WFP to investigate the cause(s) of the die-off.

By early July, collaborating laboratories have been able to rule out West Nile virus and avian influenza. Both diseases have been known to jump to humans.

Negatives are nice, but the absence of positive identification can fuel speculation.

Although the culprit may prove to be a toxin such as a pesticide, researchers suspect a viral, bacterial, fungal or parasitic pathogen. Until we learn the exact source of what wildlife health experts innocuously label “a morbidity/mortality event,” contagion — transmissible disease — remains a probable cause. Backyard birders have thus been urged to enforce among their feathered friends a practice their own plagued species has found so difficult: social distancing. Notice to the winged: “Restaurants closed until further notice.”

The precaution makes sense. The several species most affected by this malady are birds commonly seen pecking seeds from, or congregating near, the miniature hanging silos: jays, starlings, grackles, robins and cardinals. Nestlings and fledglings appear hardest hit.

One intriguing hypothesis concerns the possible ecological connection between the bird blight and this spring’s emergence of the Brood-X cicadas. After seventeen years of underground adolescence many of the X-ers emerged carrying a nasty fungus that might be turning aerial adult insects into lethal fare. For mid-sized songbirds such as those afflicted with the mystery disease, 17-year cicadas constituted an abundant, once-in-a-lifetime taste treat, a bonanza of deadly consequence. What lends credence to this surmise are the chronological coincidence and the uncanny geographical overlap of both occurrences.

The obverse situation – though anecdotal – is likewise suggestive: no cicadas, no symptoms. The dense woodlands that make the Wissahickon Valley one of the country’s great urban bird sanctuaries was surprisingly – and, to some naturalists, disappointingly – spared from the cicada blitz. Last week, the Local asked Chris Strub, SCEE’s Director of Wildlife Rehabilitation, about the health of the area’s avian population. He reported that “there have been no confirmed cases, not even a strong suspicion” of a morbidity/mortality event exhibiting the signature symptoms of the songbird plague. (Incidentally, hummingbirds – nectar lovers rather than insectivores – appear immune to the disease, so keep those sugar-water stations clean and cool!)

Have our local birds dodged a bullet? Would they suggest that the slogan “Keep It On The Hill” is an exhortation to keep feeders filled? As our current experience with a human pandemic illustrates, now is no predictor of later and here does not imply hereafter. For the birds, there may come a diagnosis, but there will be no cure. The disease will run its course. Prevention is the only remedy. The organizations cited in this article uniformly endorse the following guidelines:

And please don’t beat yourself up because you think you are depriving birds of nutrition. Feeders are fast-food drive-thru’s for birds. They don’t need it. Bug protein is a whole lot healthier. That’s why they feed it to their nestlings. Confess it: You’re investing in that seed for your own pleasure. And it’s a lovely, honest pleasure from which we ought at times such as this refrain. Lest we make it a guilty one.

Readers who wish to become involved with the reporting of suspected ill birds should use the following link: http://www.vet.upenn.edu/research/centers-laboratories/research-initiatives/wildlife-futures-program