Becky Birtha (right), acclaimed author who grew up in Germantown and then Mt. Airy, is seen at an LGBTQ event at Independence Hall with her partner of 23 years, Nancy Kehoe-Troilo. by Len Lear Becky … 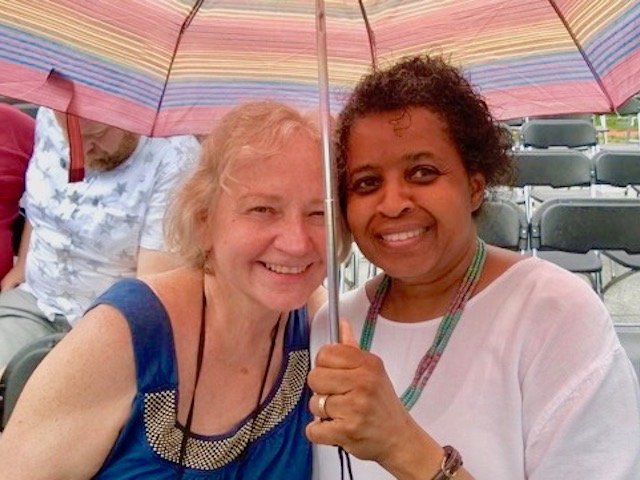 Becky Birtha (right), acclaimed author who grew up in Germantown and then Mt. Airy, is seen at an LGBTQ event at Independence Hall with her partner of 23 years, Nancy Kehoe-Troilo.

Becky Birtha, who read from her work at the Kids Lit Festival at Big Blue Marble Bookstore in Mt. Airy on Saturday, May 19, uses poetic language with meteorological precision. When you read her work, an unconstraining voice persuades you to rejoice, as a poet might say. Birtha’s powerful language on the subject of lesbianism is a bonfire in a field of deep kindling. And her own personality exudes an aura of charm and ebullience that eschews pretension.

When asked last week when she realized she was a lesbian, Becky, 69, replied, “I first recognized the pattern in my relationships (‘crushes’ would probably describe them better) when I was about 13. I wrote about it in my journal. I started keeping a journal when I was 11 and continued throughout my life.

“But at that time, I didn’t even know the word for it or that such a thing existed. I’m not on either extreme end of the spectrum, and I dated men for several years. I began to figure things out through the second wave of the feminist movement and started identifying as a lesbian at the beginning of my first long-term relationship (with a woman), in 1976. We were together for nearly 10 years.”

Birtha was born in Hampton, Virginia, and lived for a year on the Eastern Shore of Maryland. Her family came to Philadelphia in 1952, when she was three. They lived on the unit block of Duval Street in Germantown and moved to West Mt. Airy when she was at Girls’ High School.

She went to the Henry School in Mt. Airy for three years and then Lingelbach School in Germantown. Her mom still lives in Mt. Airy, although Becky now lives in Delaware County with her partner of 23 years, Nancy Kehoe-Troilo, a retired hair stylist.

“As a child,” Birtha said, “I was lucky to grow up in a family that valued literature and stories and encouraged me to keep writing.

“I’ve always identified as being African American and Black, or at least after being ‘colored, Afro-American and Negro.’ Other identities — Irish, Cherokee, Catawba and likely Scottish — are part of my heritage and oral history. They pique my curiosity but aren’t a big influence on my writing …

“I ‘came out’ in 1976, a wonderful, supportive and exciting time to do that. ‘Nights Like This One: Stories of Loving Women’ was my first book, and though I know I’m a better writer now, it was probably an accurate reflection of the times and of that time in my life.”

Birtha’s first children’s book was published in 2005, making the shift to writing primarily for children because she had become a parent. Her daughter, Tasha, joined her through adoption in 1990 at age 16 months, and after that she was pretty much kid-focused for a long time.

Birtha has won numerous awards, but two of them mean the most to her. “Receiving a Fellowship in the Arts from the Pew Foundation would be a close second because it was only the second year of the fellowships, because I was in such amazing company and because there was actually a large amount of money involved.

“But I think the most meaningful has been the Arkansas Diamond Primary Award, for my second children’s book, ‘Lucky Beans,’ because it was actually selected by school children across the whole state of Arkansas as their favorite book. The award was a shiny, substantial medal, which I can take on school visits and show kids that you don’t have to be an Olympic star. You can actually win a medal for writing a book!”

One reviewer wrote that Birtha’s writing “has a rare emotional depth.” Where does that depth come from? “I know that I’ve always been an extremely sensitive person, which was not necessarily a good thing. As a child, I had a hard time with criticism and cried a lot. I took things much harder than other kids, and I think I really did feel more emotional pain.

“Sometimes a day at school could be hard to get through, and music lessons were a disaster. Even today, I rarely see movies because it takes a long time for their impact on me to wear off. But maybe this heightened sensitivity is a blessing in disguise, adding the emotional depth you speak of to my writing.”

Becky attended her first Quaker Meeting for Worship when she was 16, and being a Quaker has been a long-term commitment/foundation in her life. She was active in the Quaker Lesbian Conference and their monthly meetings for worship and potlucks for years.

If Becky could meet and spend time with anyone on earth, living or dead, who would it be? “I was named Rebecca after my paternal great-grandmother, who lived in Kershaw County, South Carolina, and was enslaved until she was 12 years old at the end of the Civil War.

“She lived to be 103 and was still alive when I was a baby, but we never met. I’ve always been curious about her, gathering whatever scraps of family stories I could find. I’d love to have a chance to spend time with her and find out what her childhood and young adulthood were like at that critical point in history.”

Donate now to CH Local
The Latest
Important questions for voters on May 18
Under a much more quiet set of circumstances than last November, local voters again are heading to the polls to vote in a primary election. So-called “off-year” elections, in which …

Anthony Kroch, linguistics professor
Anthony (Tony) Kroch, Professor Emeritus of Linguistics at the University of Pennsylvania, died of cancer at the age of 75 on April 27 in his home in Mt. AIry. He was attended by his wife, family and …
Founders Day marks another opportunity to help local aid agency Face to Face
On May 13, 1984, the dining room doors opened for the first time at Face to Face in Germantown. The idea was simple: much like a soup kitchen, it would offer hot meals for locals, no questions asked.

25-year publishing dream comes true for Hill sisters
Twenty-five years ago sisters Abby Pete and Leslie Pontz hired an agent to find a publisher for a proposal they had for a children's book of theirs that would be called “Harvey the Hippo.”
Development plans next to Pleasant Playground hinge on pollution at the site
The contested development plans for a 34-unit apartment building next to Pleasant Playground in East Mt. Airy hinge on known pollution at the site and what will eventually be done with it.