Tall (6-foot-7), dark and handsome, Mt. Airy entertainer David Darwin has movie star looks. by Len Lear On the roulette table of life, what are the odds that a local guy would perform on national TV … 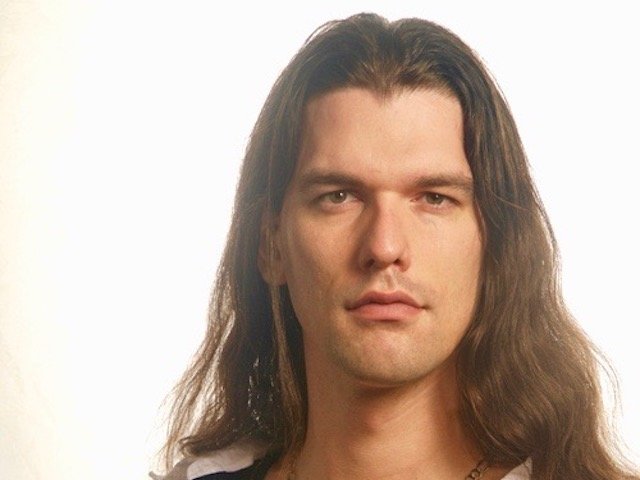 On the roulette table of life, what are the odds that a local guy would perform on national TV on a major network, as tall, dark and handsome Mt. Airy resident David Darwin did on Monday, Nov. 18, on the Late Late Show with James Corden, on CBS-TV3, seen by millions of people?

Darwin, 41, who has also appeared twice on America's Got Talent, is a virtual one-man circus. On the Late Late Show he brought down the house by balancing what seemed like a whole library of books on his chin while doing gymnastic moves with his giant (6-foot-7) body. This juggling contortionist who sings and plays musical instruments also entertains audiences with sword swallowing, walking on broken glass, fire manipulation and just about every other family-friendly talent of which you can think.

“I never had to leave a desk job because I never had one,” said Darwin, who graduated from Penn State with a degree in journalism but who could never be chained to a desk. “I went from being a broke student to being a starving artist, and it was a step up.

“I take great pride in the fact that I never had a 'regular' job. I was afraid that if I got comfortable with steady money, I might never leave it. In other words, I might still be waiting on tables.”

A native of North Jersey with a temperament as smooth as chocolate mousse, Darwin, who was born David Smith but changed his name legally because “if you Googled David Smith, you'd never find me,” began juggling as a hobby in high school. His father, an accountant who taught David to juggle, “was a terrible juggler but a good teacher of it.”

After graduating from Penn State, Darwin moved in with a friend, a magician, to an apartment in West Philadelphia where they struggled to pay the rent. Darwin, who had performed at fraternity parties and tailgate events in college, began juggling at birthday parties but soon realized he would have to add other skills to his repertoire. 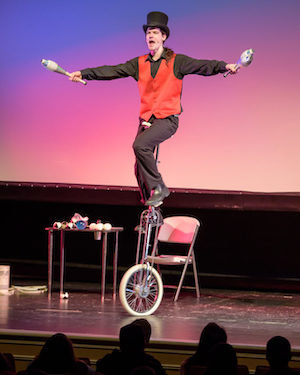 Darwin, a former instructor at the Philadelphia School of Circus Arts in Germantown, usually brings down the house with the final segment of his one-hour act, riding a unicycle while juggling several balls.

“It took a while to get good at other things,” he recalled. “Some people asked for their money back. I ever tried standup comedy, but that is way harder.”

After a while, Darwin (he and his wife chose the name of a historical figure they both admired) began getting work at schools, summer camps, libraries and corporate events, calling himself “The One-Man Sideshow,” a name he is less fond of now.

When Darwin got married in 2011, he and his wife, Rachel, who had bought a house in Mt. Airy in 2008, wanted an offbeat ceremony with a performer officiating. They contacted Teller, of the famous Las Vegas magic act Penn and Teller, but Teller was not able to get away. (Raymond Joseph Teller, the short member of the duo who does not speak during the act, grew up in Philadelphia and graduated from Central High School in 1965.)

Teller was, however, able to get The Amazing Randi to come from his home in Florida and officiate at the wedding. (James Randi, “The Amazing Randi,” who is now 91, was a familiar figure on national television variety shows in the 1950s and '60s. The retired stage magician is also well known as a scientific skeptic who has extensively challenged paranormal and pseudo-scientific claims.)

“He would not take any payment from us except airfare,” said Darwin, who now does about 170 to 200 shows a year, including private parties, picnics, schools, libraries and several at resorts in the Poconos. Each show is an hour long and includes 20 different skills, about three minutes for each one. Everything doesn't always go perfectly. “I rarely get through an entire show without a single drop. If I juggle five balls and drop one, it's actually better. The audience knows that I'm human.”

Darwin performed during the first season of America's Got Talent in 2006. The first time he received raves from the judges, but his second performance – with a beautiful young lady – did not get him a third appearance, although I defy anyone to watch the YouTube video and tell me it wasn't extremely entertaining and hilariously funny.

Darwin, who has also been a teacher at the Philadelphia School of Circus Acts in Germantown, almost appeared on a David Letterman “Stupid Human Tricks” segment, but when the producers discovered that he had already been on America's Got Talent, they disinvited him.

Darwin sent a tape of his act last year to the James Corden Show but did not hear back until one full year later. They flew him out to Los Angeles last month, picked him up in a limousine and put him up in a hotel for two nights.

“I could get used to that sort of thing,” he said. “On the show they want to create the appearance that we are all amateurs who happen to have this one trick, but most of the people who come on these segments are professionals.”

Darwin, who has performed for as few as two people (in a blinding snowstorm), “loves Christmas parties because when the crowd has had a couple of drinks, I am hilarious.”

He lives in Mt. Airy with Rachel, who does public relations for a cancer nonprofit in Plymouth Meeting, and daughters, Lyla, 7, and Hazel, 3.

Darwin's segment on the Late Late Show can be seen on YouTube. For more information, visit OneManSideshow.com. You can reach Len Lear at lenlear@chestnuthilllocal.com