Mt. Airy singer living out her dream – to perform with the Metropolitan Opera

Leah Hawkins' favorite role was playing Julia Child in Lee Hoiby's “Bon Appétit,” a one-woman show in which an episode of Julia Child's TV cooking show is set to music. She actually had to bake …

Mt. Airy singer living out her dream – to perform with the Metropolitan Opera 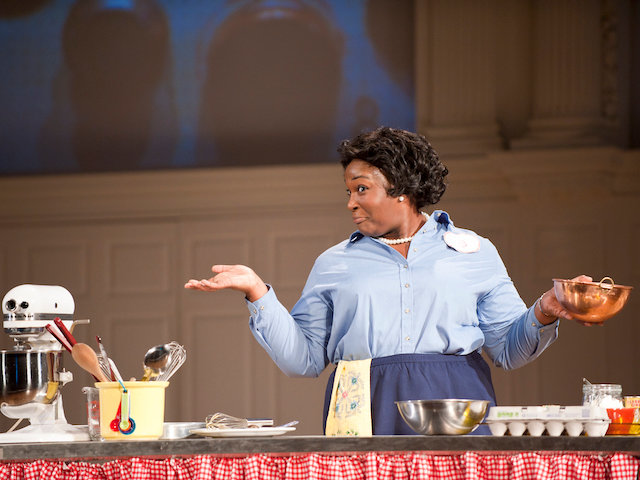 Leah Hawkins' favorite role was playing Julia Child in Lee Hoiby's “Bon Appétit,” a one-woman show in which an episode of Julia Child's TV cooking show is set to music. She actually had to bake a cake on stage![/caption]

Well Leah Hawkins, 28, who grew up in Mt. Airy and attended the Henry Houston Elementary School in Mt. Airy and the Philadelphia High School for Creative and Performing Arts, is literally living out the dream since she is now in her first season of the Lindemann Young Artist Development Program at the Metropolitan Opera. She recently made her Metropolitan Opera debut as the Alms Collector in “Suor Angelica” and the High Priestess in “Aida.”

Hawkins also completed the Domingo-Cafritz Young Artist Program at Washington National Opera, where she appeared as Ma Zegner in the world premiere of “Proving Up” by Missy Mazzoli and librettist Royce Vavrek, and Voce dal cielo in Verdi’s “Don Carlo.” Among many other roles, she appeared in “Justice at the Opera” with Supreme Court Justice Ruth Bader Ginsburg.

“I have always been 'the singer' in my family,” said Hawkins in an exclusive interview with the Local last week. “There are home videos of me singing gibberish at 2 years old, and by 5 I knew that I wanted to sing for a living. I was convinced I’d be the next Whitney Houston, but opera found me when I was in 6th grade.

“My school (Houston Elementary) had a program that sent students to see dress rehearsals at Opera Philadelphia, and the first opera we saw that year was ‘Carmen.’ I didn’t like the story, but the music, the drama and the costumes all drew me in. I went home and asked my parents for voice lessons, and they happily obliged. We found Leigh Munro’s card on the business card wall at the Trolley Car Diner, and that was the start.”

Munro, a Chestnut Hill resident, professional opera singer and voice coach, gave voice lessons to Hawkins from 2003 to 2008. “Leigh is pretty much the reason I pursued opera,” said Hawkins, who received her Master of Music in Voice from Yale University and Bachelor of Arts in Music from Morgan State University.

“Leigh introduced me to this world. When I started voice lessons, I still had dreams of pop stardom, so the first thing I ever sang for her was ‘The Greatest Love of All.’ She smiled and passed me a copy of ‘Caro mio ben,’ a very popular Italian art song by Giuseppe Giordani. The style fit me like a glove. From there we continued exploring songs and operatic repertoire. I still went back and forth between pop and jazz, but by 11th grade, opera had my complete focus.” 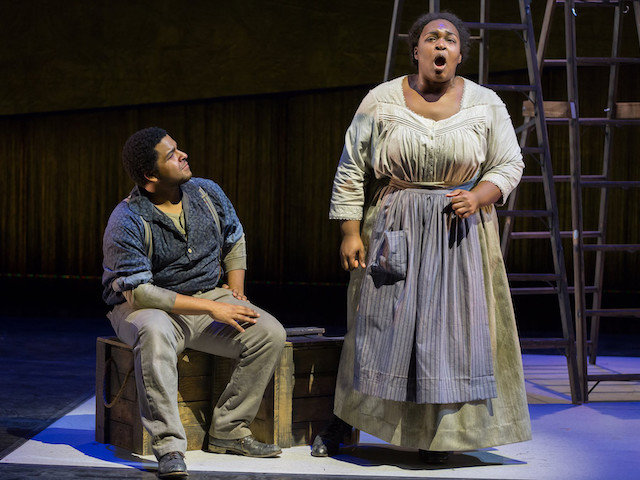 Hawkins is seen here as Ma Zegner in the world premiere of “Proving Up” by Missy Mazzoli and librettist Royce Vavrek with the Washington National Opera.[/caption]

According to Munro, “When Leah first opened her mouth to sing, I knew I was in the presence of something very special. A voice of a maturity way beyond her years in size and beauty of tone. I remember Beverly Sills once had me join her for an audition she was conducting at New York City Opera. She remarked, ‘It’ll be easy to spot the ones with exceptional gifts. They have an aura around them.’ Hawkins had that aura.

“I feel so fortunate to have had the opportunity to work with her and, perhaps, start her on her musical journey. Besides her immense talent, she is a very smart, exceptionally warm young woman. She's also blessed to have a loving family who have supported her from the very beginning and continue to do so. She’s worked hard and deserves every success that comes her way. Mt. Airy should be very proud!”

Was it always Hawkins’ dream to sing with the Metropolitan Opera? “Yes, absolutely! It’s the dream of most, if not all opera singers. My high school best friend and I used to sit at the computer for hours watching YouTube videos of Met performances. I went to Met HD broadcasts alone. I used to tell people I was going to sing there. (I was a confident teenager; ha ha!)”

Since so many opera singers labor in obscurity, pay high fees for lessons for years and then get paid nothing to perform (maybe even have to pay money themselves to perform), how did Hawkins’ stunning success come about?

“After I finished graduate school in 2015, I was offered a spot in the Young Artist Program, a two to three-year paid residency/training program for young, developing singers at Washington National Opera.

“At the end of my first season, the director of the program was offered his same position at the Metropolitan Opera. He told me he wanted me to sing for him there once he took the position, so I stayed an additional season in D.C. and then sang for them last January.” (She made a spectacular impression and was hired.)

“In November of 2018 I made my Met debut ... and I have a few more performances of the High Priestess in ‘Aida’ this season. Through these programs I’ve had steady work for a few years now, but it’s a tough life. The work isn’t always constant; the pay isn’t always amazing, and the conditions aren’t always ideal. You miss important family functions. The rejection is constant; we hear ‘No’far more than we hear ‘Yes,’ BUT singing/music making is a gift. So long as people keep saying ‘Yes,’ I’ll keep singing.” 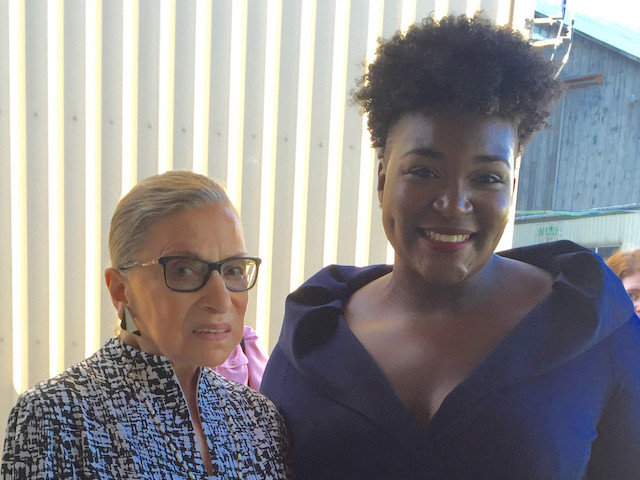 Among many roles with the Washington National Opera, prior to her debut with the Metropolitan Opera, Hawkins appeared in “Justice at the Opera” with Supreme Court Justice Ruth Bader Ginsburg.[/caption]

Of all the roles Hawkins has performed, which one was her favorite? “I was asked this question four years ago, and my answer is still the same — Julia Child in Lee Hoiby’s ‘Bon Appétit,’ where an episode of Julia Child’s cooking show is set to music.

“It is a one-woman show where I had to bake a cake on stage. It challenged me as a singer and an artist, and it taught me how to be fearless and have fun on stage. It was also the first time I played a living person, so I had real footage to work from. It changed how I approached role preparation and acting.”

Hawkins has been the beneficiary of almost unanimous rave reviews over the years, but there is no danger of their going to her head. “I’m grateful for the kind words,” she said, “and I’m happy to use them online, but unfortunately, they don’t actually come with jobs. I wish! I’m now getting into the habit of not reading reviews until the close of a show because with the good comes the bad.

“My first not-so-great review crushed me. Not everyone will love what I have to offer, and I’m human, so I won’t always be at my best. I don’t have time to wallow in sadness, though, because someone didn’t love me. Conversely, I don’t want to read nice things and not take that extra step in performance.”

Although Hawkins is a soprano, she spent many years singing a mezzo-soprano repertoire. “The transition sounds simple enough, but it ended up being highly emotional and stressful. I became a little bit of a recluse for two or three years. It needed to happen, but it was hard!”

Hawkins is very grateful to her parents, Harold and Bessie Hawkins, who “have been incredibly supportive from the start. They allowed me to spread my wings and assert my independence and individuality, even as a young child. My aunt, Lorraine Barber, is also a constant source of guidance and prayers. My sisters and their children shower me with love. There are so many people who have impacted this journey and will continue to. They know exactly who they are. It takes a village, and I’m pretty sure I have a small town.”

After 50 years, shoe repair man still has heart and sole

‘Divergent ‘ a thoughtful teen-targeted sci-fi tale of tribalism
Each week, veteran film critic Bill Wine will look back at an important film that is worth watching, either for the first time or again. “Divergent” is a 2014 science-fiction drama set …

History of area mining industries topic of Historical Society talk
The Springfield Township Historical Society will present a program, “The Mining Industries of Southern Montgomery County”, on Thursday, November 5, at 7:30 p.m. via Zoom. Guest speaker …
Call to action:  Brainstorming future programs with the Chestnut Hill Conservancy
Our family moved to Chestnut Hill because we were drawn to its strong sense of history, community, and culture.  One of the first things we did once we settled in was to join the Chestnut Hill …
The fake news dilemma
There may be no value more central to American identity than free speech. It was so important to the founding fathers that it was enshrined in the very first amendment of the Constitution, the first …