Revs. Kent Matthies (right) and Daniel Gregoire stand along the Unitarian Society of Germantown’s sign on Lincoln Drive proudly displaying a message of support for “our Muslim … 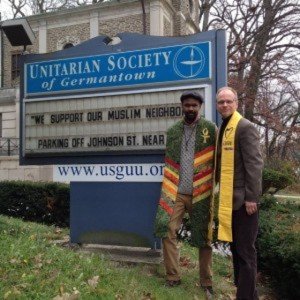 Revs. Kent Matthies (right) and Daniel Gregoire stand along the Unitarian Society of Germantown’s sign on Lincoln Drive proudly displaying a message of support for “our Muslim neighbors.”[/caption]

Rev. Kent Matthies has always had a passion to connect philosophy, theology, art, politics, science and spirituality within his community. The best way to do so, he says, is through religion.

Matthies, 48, is the minister at the Unitarian Society of Germantown (USG), founded 151 years ago, where he has been devoted to encouraging and empowering people in his community since 2002. (The church moved into its current building at 6511 Lincoln Drive in Mt. Airy in 1928.)

“Working in the congregation is magical,” Matthies says. “From helping people find jobs, fighting climate change or visiting people in the hospital and singing hymns together, it all provides our congregational life’s rich connections and satisfaction. The influence of religion makes the world more just and allows you to celebrate life. I was drawn to religion from the very start and always feel excited to go wider and deeper.”

According to the USG website, Unitarians, who are on the most liberal end of the religious spectrum, “need not think alike to love alike. We are people of many beliefs and backgrounds: people with a religious background, people with none, people who believe in a God, people who don’t and people who let the mystery be.

“On the forefront of lesbian, gay, bisexual, transgender and queer inclusion for more than 40 years, we are people of all sexual orientations and gender identities.”

Matthies grew up Unitarian Universalist in the Chicago area. He explains that in that church, the walls of the sanctuary are covered by tile murals of historical, spiritual change agents like Harriet Tubman, Gandhi, Buddha and Jesus. “I was drawn to religion from the very start,” he says, “and always felt excited to dig deeper into my studies.”

Matthies received his B.A. degree in Spanish, in which he is fluent, from Lawrence University in Wisconsin and a Masters of Divinity degree at the Unitarian Universalist Seminary in Chicago. But before attending the seminary, Matthies had the opportunity to work in southern Mexico with Guatemalan refugees to help reduce hunger.

In those efforts, he became discouraged and angry at the apathy found in the general U.S. population on such issues. “I realized that I needed to go more directly into religion to tap into wells of love and hope for this work. My missionary zeal comes from a deep belief that we can bend the arc of the universe toward justice while also experiencing true joy.”

Currently, as a representative of Unitarian Universalism on The Religious Leaders Council of Greater Philadelphia, Matthies helps identify issues of concern for the region. The Council is the first of its kind in the city, with more than 30 member communities representing more than two million people of diverse faith traditions from across the region.

His work in the region has included assisting the Mayor’s Task Force to reduce violence in the city, co-chairing the USG Dr. Martin Luther King, Jr. Day of Service efforts, which mobilizes more than 500 volunteers each year, etc.

When not serving his church community, the cleric can be found at his home in Mt. Airy, where he enjoys the neighborhood’s vibrancy of cultural arts and diversity, with wife Kristin and their two sons, Micah and Ellis. In his spare time, he enjoys playing tennis, practicing yoga, reading and listening to jazz.

Rev. Matthies gained some press attention late last year when USG put up a sign on Lincoln Drive proudly displaying a message of support for “our Muslim neighbors.” The church put up the message to echo a statement the church had made on the subject:

“As Unitarian Universalist faith leaders in Pennsylvania, we condemn the proliferation of hateful speech and actions directed at members of the Muslim community. We find the recent desecration of the Al-Aqsa Islamic Society in Philadelphia particularly abhorrent. Our faith proclaims the inherent worth and dignity of each person and the free and responsible search for truth and meaning. We value the wide diversity of religious beliefs held by others and oppose any attempt to limit or undermine the religious practices of any faith tradition ... It is our duty as Americans, regardless of faith or creed, to speak up and speak out against those who seek to demonize an entire people.”