The 2021 lacrosse season came to an end for Mount St. Joseph Academy last Tuesday in the first round of the PIAA Class AA tournament. Seeded fourth coming out of District 1, the Magic clashed with … 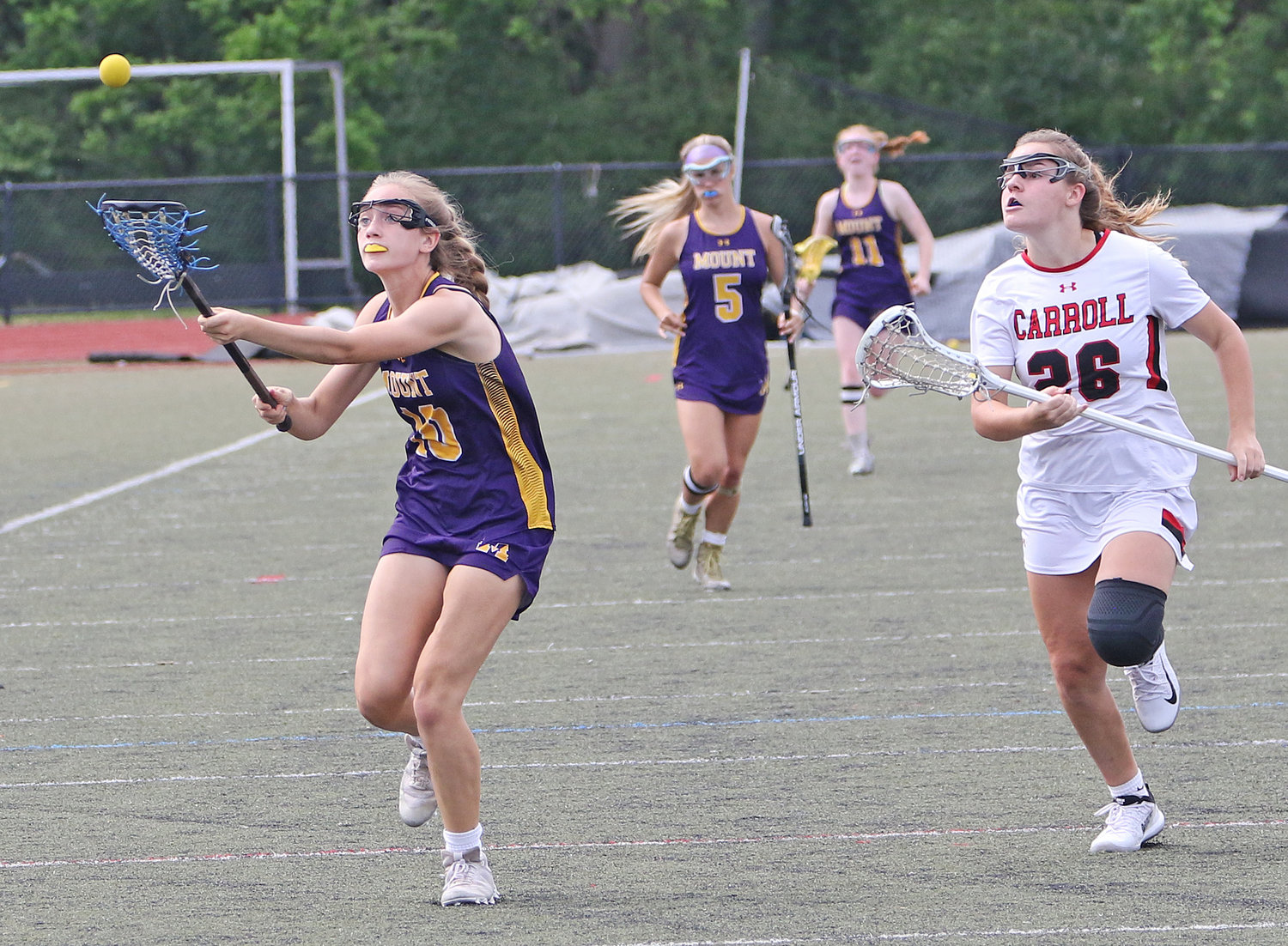 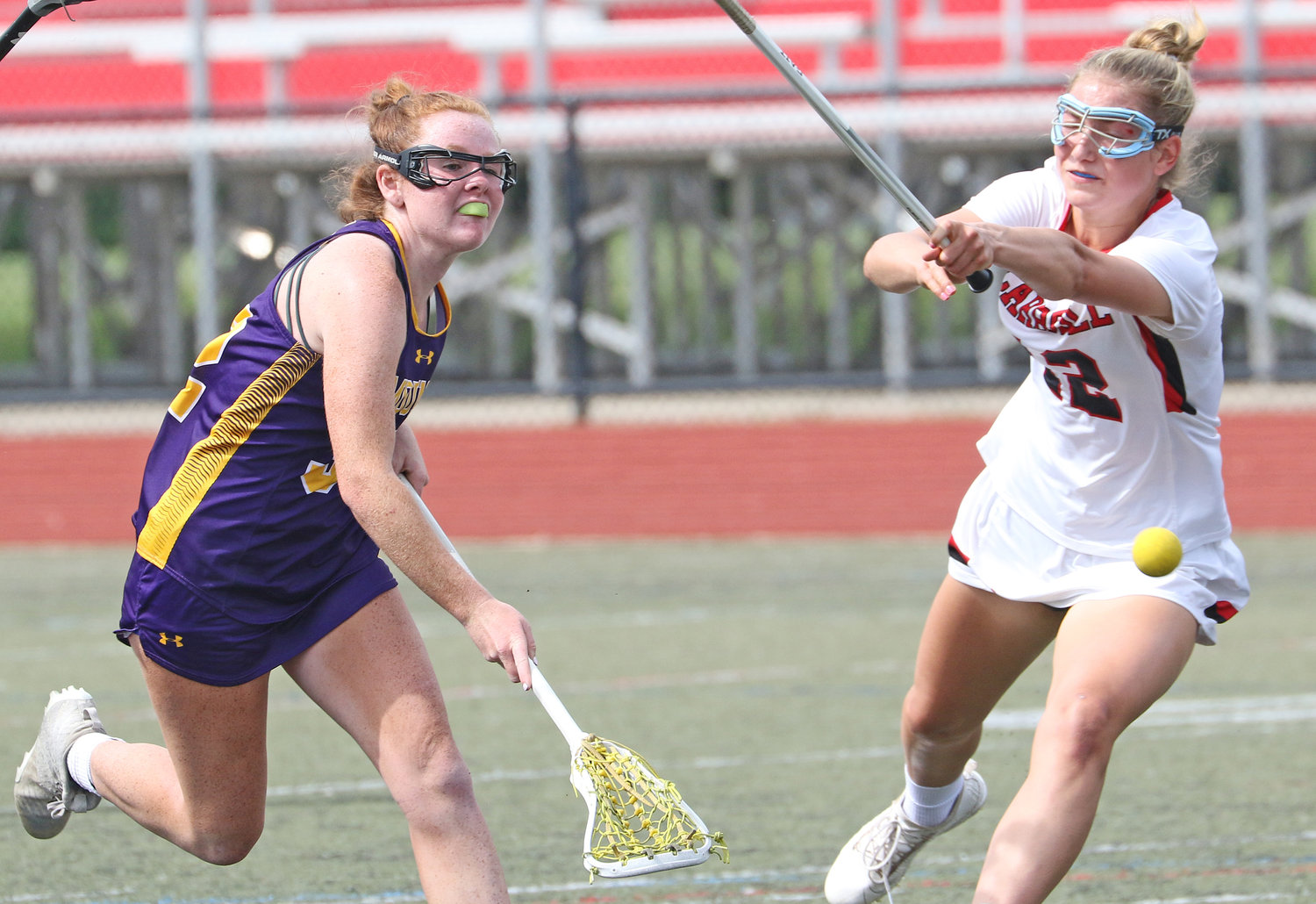 In the process of scoring the Mount's third goal, junior Lauren Maher (left) follows through on her shot as the ball travels past Archbishop Carroll's Brooke Wilson.  (Photo by Tom Utescher)
Previous Next
Posted Wednesday, June 9, 2021 10:35 am
by Tom Utescher

The 2021 lacrosse season came to an end for Mount St. Joseph Academy last Tuesday in the first round of the PIAA Class AA tournament. Seeded fourth coming out of District 1, the Magic clashed with District 12 champ Archbishop Carroll at Cardinal O'Hara High School.

Carroll's 6-2 lead at halftime was not an insurmountable one, but the Patriots widened the gap in the second period to win, 16-4.

Still, no one at the Mount could recall a state tournament appearance for the lacrosse program before this spring. The Magic were regular-season co-champions in the Athletic Association of Catholic Academies, and after their playoff run they closed out the year with an overall record of 16-5.

"I'm super excited for the future," said third-year head coach Dipi Bhaya, referencing the youth of the Mount St. Joseph franchise. "We had young players in key roles, ball-handling roles. A lot of the young girls belong to clubs and they play all year around, so that will help us."

This spring the Mount split in its home/away AACA series with Villa Maria Academy, which later won a district seeding game against the Mount for third and fourth place. Villa won its first game in the state tournament, but then was knocked out by Archbishop Carroll in last Saturday's quarterfinal round, 21-9.

In the Magic's final 2021 appearance last Tuesday, junior Lauren Maher scooped up the ball off of the opening draw. She raced downfield to get off a shot that was saved by Archbishop Carroll keeper Sophie Kvetan, a senior who will enter the U.S. Military Academy at West Point.

At the other end Mount sophomore goalie Annie Shields, frequently under bombardment, finished the day with 18 saves.

Carroll senior Keri Barnett, a West Chester recruit, opened the scoring off of a free position in the middle of the second minute. MSJ senior Maggie Wooley, a Norwood Fontbonne Academy graduate, leveled the count at 1-1 just over six minutes into the game, scoring on a low shot after being fed the ball by senior Devon McGarvey.

Just 40 seconds later, the Patriots went ahead for good as junior Emma Talego (verbally committed to Loyola U.) came from the rear on the right side to find the net.

The resulting 2-1 score stayed on the board for the better part of five minutes, as the Mount's Shields turned aside a hard outside shot and Carroll junior Kiley Mottice (verbal to North Carolina) hit a post on another attempt.

The count rose to 3-1 with 13-and-a-half minutes remaining in the opening period, and the Patriots' lead grew to 6-1 over the next seven minutes or so. The Magic's McGarvey scored from a step off of the crease on the right to make it 6-2 with 4:32 left in the half. That score held up until the intermission, thanks to more saves by Shields and some stalwart defense by junior Sarah Hughes.

"If we could've fixed some of the mistakes we made, we would've been fine in the first half," Coach Bhaya said.

Carroll logged a lot of ball possession in the second half when, as the Mount's mentor noted, "They controlled more and more of the draws."

The Patriots scored twice in the first two-and-a-half minutes, then with the clock down to 18:48 the Magic's Maher drove through the middle and scored to make it 8-3. Before the midpoint of the period arrived, Carroll spread the score to 13-3.

Receiving a pass from Maher as she cut in from the right side, McGarvey deposited what would be the Mount's final goal of the season with 11:14 on the ticker. Three more markers by the Patriots cemented the result at 16-4.

The Mount players, most of whom will return, had gotten their first taste of state tournament play.

"In the next year or two, you're going to see Mount lacrosse blossom," Bhaya predicted. "The mistakes we've made in these tournament games are things that can be fixed pretty easily. I love coaching these girls, because they're amazing kids."