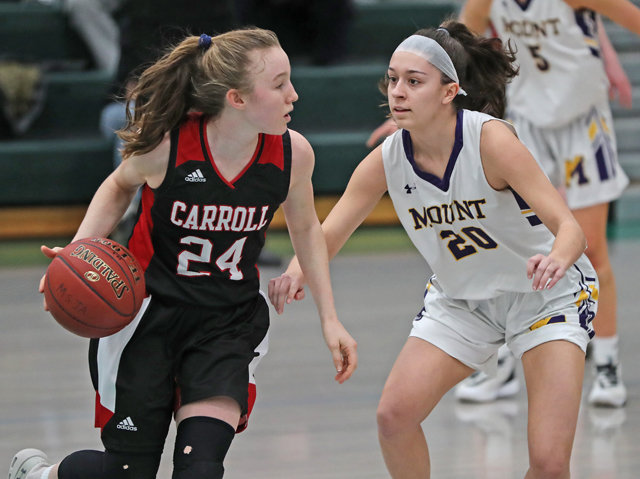 Mount St. Joseph Academy ended its basketball season last Saturday in a first-round game in the PIAA tournament. The third seed out of District 1 in Class 5A, the Magic bowed, 47-41, to another three-seed, District 12's Archbishop Carroll High School.

Mount St. Joe's, which had been the runner-up in the Athletic Association of Catholic Academies tournament, put the wraps on the 2019-20 campaign with an overall record of 20-9.

In Saturday's state tourney opener at Methacton High School, a hot start by the Mounties had them up 15-9 at the end of the first quarter. The Carroll Patriots came back to lead by two points at the half, and later they took a 38-30 advantage into the fourth quarter.

Over the first two minutes of the final period the Magic got back within three points of the leaders (38-35), but got no closer. Later, free throws in the foul bonus put Carroll up by eight points once more before MSJ junior Grace Niekelski scored on a drive with seven seconds remaining, setting the final margin at six.

Niekelski and senior Audrey Bryce each scored six points for the Mount, which received 13 from senior point guard Lauren Vesey and 11 from senior forward Kelly Rothenberg. The Magic's total was rounded out by four points from freshman Georgia Pickett and one from senior Taylor Sistrunk.

Carroll was powered by quick sophomore guard Grace O'Neill, with a game-high 17 points, and by 13 points from senior forward Erin Sweeney, who has signed with Drexel University.

The unusual playoff structure in PIAA District 12 often causes some Philadelphia Catholic League teams to receive artificially low seedings. The team seeded second, ahead of Carroll, was Mastery Charter North. Mastery lost the District championship game to number one Archbishop Wood by 31 points, while in two meetings with Wood this season, Carroll lost by 13 points the first time and by six in a rematch in late January.

In the third-place playoff in District 12, Carroll rolled to a 79-30 win over Friere Charter, which still made the PIAA tournament with an overall record of 1-22. 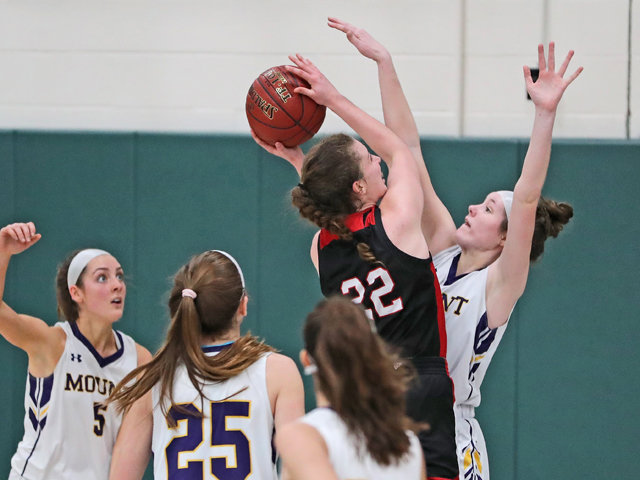 The game opened with Niekelski scoring on a drive for the Mount. Carroll's O'Neill went coast-to-coast for a lay-up, then hit a jumper from the lane. The Patriots made several aggressive drives to the hoop and hoisted lay-ups with a spin on the ball, but these shots didn't fall.

Bryce scored for the Mount on an inside move and then Carroll answered to edge back in front, 6-4.

Just past the middle of the period, Rothenberg converted off of an offensive rebound to kick off an 11-0 run by the Magic. Pickett, who had come in off the bench, scored twice from the paint, then Rothenberg stuck a three-pointer from the right wing.

Vesey put in a lay-up with 12 seconds on the clock and it looked like Mount St. Joe would lead 15-6 at the quarter, but right at the buzzer Carroll freshman Meg Sheridan nailed a "three" from the left corner to make it 15-9.

This proved to be the beginning of an 11-0 surge for the Patriots that extended into the middle of the second period. Sweeney came on for a baseline drive, a lay-up off a pivot, and a put-back, helping Carroll forge ahead, 17-15.

Bryce stopped the Mount's tumble with a short baseline shot, tying the score. After a lone free throw by AC freshman Taylor Wilson, Rothenberg deposited a lay-up in transition with under three minutes left in the half. This gave Mount St. Joseph what would be its final lead of the afternoon, at 19-18.

Carroll moved ahead on a trey by O'Neill, then a pass from Pickett set up a lay-up by Vesey to knot the score at 21-all. With 24 seconds left, O'Neill moved Carroll ahead for halftime (23-21) on a two-shot foul, which was also the Magic's seventh of the half. The Patriots would also get into the bonus late in the second half, as well.

Foul calls had hampered the Magic back in their District 1 semifinal loss, and Coach Feeney noted, "There's been a big discrepancy the last couple of games, and I can't figure out why. It didn't influence the outcome of this game, though."

Carroll likes to shoot the ball from the three-point arc, but the Patriots were only able to connect from that distance twice in the first half.

Feeney explained, "Our plan coming in was to chase them off the three-point line and have them try to make difficult 'two's.' Credit to them, they got some looks later on and knocked them down."

The third quarter started with a triple by Carroll's Wilson, and her sophomore teammate Maggie Grant put one in just after the middle of the period. In between, Wilson was fouled on an attempt from the arc and made all three free throws. The Mount's Vesey hit a "three" of her own and scored on a breakaway off a feed from Niekelski, but the Magic had slipped behind by eight points at the close of the quarter, 38-30.

Both teams played good interior defense. Players who are used to rising up for shots low in the paint were often double-teamed and simply couldn't get off the ground.

In the fourth quarter, the Mounties halved their deficit right away with a runner by Vesey and a put-back by Rothenberg. When Sistrunk made one of two free throws with 5:56 left to play, the gap was down to three points, at 38-35. From the top of the key, Sweeney netted a three-pointer for Carroll.

On the Patriots' next possession, they passed the ball around until the clock got down close to three minutes, then missed a lay-up. Niekelski made one for the Mount at the other end right at the three-minute mark. She then picked up her fourth personal foul with 2:36 to go, and soon after that a jumper from the lane by O'Neill put Carroll back up by six, now at 43-37.

Mount St. Joe missed a three-point attempt, then committed its sixth team foul with 1:42 remaining. Neither team would score again until less than half-a-minute was left on the clock.

The Patriots failed to hit a lay-up, stole the ball back, and then missed another shot. The Magic were off-target on a trey, had the ball stolen back by Sistrunk, but then failed to find the net once more. A foul with 25 seconds left put Carroll into the bonus, and O'Neill hit both shots.

When Rothenberg scored on a Mount inbounds play, the Magic called time-out with 17.8 seconds left, trailing 45-39. They had to foul again, and this was Vesey's fifth personal. O'Neill again made two free throws for a 47-39 Carroll lead with 16.4 seconds to go.

The Magic came down on offense and missed a three-point attempt. Niekelski recovered the long rebound and went in for a lay-up, but now only seven ticks remained on the clock and the Patriots still led by six.

MSJ's Feeney called time-out once more to finish the game with the five eligible seniors out on the floor; Bryce, Rothenberg, Sistrunk, Grace Morrow, and Maura Scanlon.

Although the team will graduate six seniors, Feeney said, "I'm happy with who we have coming back."

The seniors next year will be Niekelski, a Division I college recruit, and guard Danielle Dodaro (also a lacrosse player at the Mount). There were no sophomores on this year's roster.

Speaking of Pickett and fellow ninth-graders Kiersten Pumilia and Laura Hoffman, Feeney pointed out, "We have three girls in the freshman class who all can play. There are also kids on the JV now who are going to be contributors next season."

The coach said he had no significant surprises in his first season with the Mount, having come from the boys' team at nearby St. Philip School.

"I'd seen the Mount play pretty often the last three seasons," he explained, "so I wasn't unfamiliar with the league or the style of basketball. It was pretty much as I expected, and it was a lot of fun."

He credits the seniors with helping to smooth out the coaching transition.

"They started the season working with the third coaching staff in their four years," he noted. "They had to learn a whole new offense, a whole new defense, and different terminology. They did a great job processing all that, and that's how we got to 20 wins."