The Rizzo family home on 8919 Crefeld St. (Photo courtesy of Elfant Wissahickon Realtors) by Elizabeth Coady The sign hanging at the curb of the traditional stone house at 8919 Crefeld St. in … 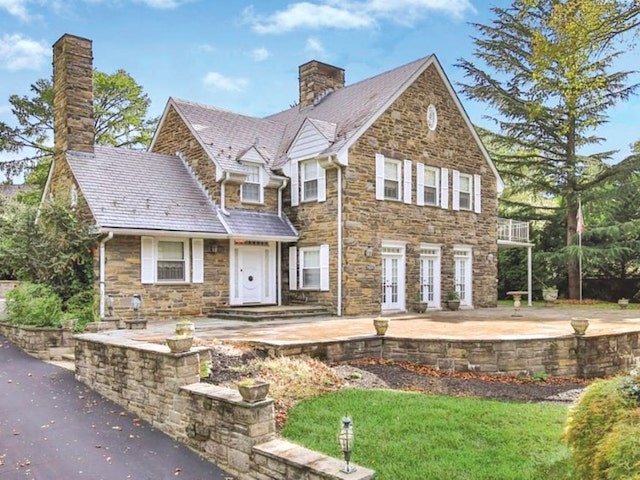 The sign hanging at the curb of the traditional stone house at 8919 Crefeld St. in Chestnut Hill announces this a “distinctive property’’ being offered for sale by Elfant Wissahickon Realtors. But the legacy of this estate as the former home of Philadelphia’s legendary boss-cop-turned Mayor Frank Rizzo may be its most distinguishing selling point.

The 7,398-square-foot house, with a cathedral ceiling, three fireplaces and parquet flooring and a price tag of $1.695 million, was a backdrop for Rizzo’s outsized persona as well as central character in some of his most public political foibles.

South Philadelphia’s bombastic son bought the house, situated on a double lot west of Germantown Avenue at the coveted tippy top of the city’s garden district, in 1973 for a mere $90,000. He purchased it shortly after he realized he couldn’t afford the more palatial estate he ordered custom-built a year earlier in Roxborough – an about-face that cost the developer, Rizzo’s friend and figurative partner-in-crime Al Pearlman, his air-conditioning contracting business.

Undeterred by his “best friend’’ leaving him holding the bag, Pearlman then oversaw extensive renovations of the Crefeld property that news swags at the time calculated had cost as much as $320,000. How could a mayor on a $40,000-a-year salary afford that? When allegations surfaced that Pearlman paid for the improvements, a state grand jury opened an investigation and sought his company’s business records. Pearlman’s business manager, James T. O’Brien, spent six months in prison to avoid handing over the financial books of the Tracey Service Co.

The updated house became a talking point during Rizzo’s 1975 reelection campaign with even “People” magazine chiming in on the refurbishing fiasco, reporting on its “$400 handcrafted brass doorknob, sod for the yard ($8,000), 17 brass carriage lanterns ($200 each) and new stonework ($30,000).” The work was done without the proper building and inspection permits, and Rizzo deflected questions about the oversights with a dismissive “I don’t comment on fiction.’’ He later leaked the claim that he had made $26,000 in a stock market windfall to negate negative reporting.

Rizzo and his wife Carmella, along with their daughter Joanna, moved into the four-bedroom, three-and-two- half-bath fieldstone house in 1975. Later, the mayor’s son Frank “Franny” Jr. also moved to Crefeld, which became a meeting spot for political operatives working on Rizzo’s mayoral races. Then as now, the family enters and exits through the rear door, and a sign on the front door directs visitors to the back. 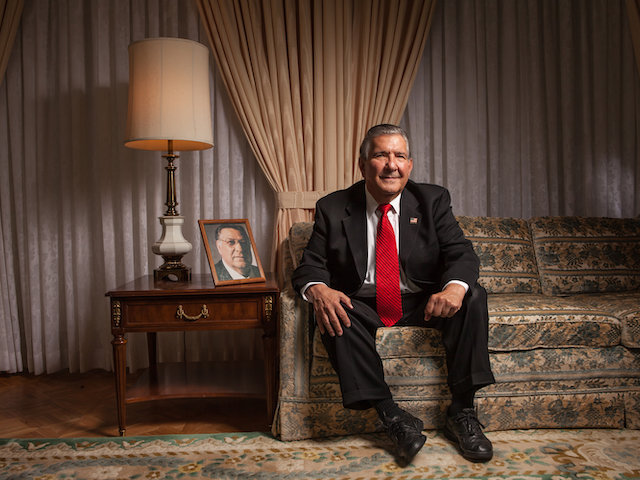 Former City Councilman Frank Rizzo Jr. in his family home in Chestnut Hill. A portrait of his late father, former Philadelphia Mayor and Police Commissioner Frank Rizzo, is at his side. (Photo by Adam Jones)

“The guys would come over on Saturday to their home,’’ Rizzo Jr. told the Philadelphia Inquirer in July for an article on his mother’s death at the age of 101. Carmella, the petite matriarch, was married to Rizzo for nearly 50 years. “It was hectic. They were always planning for the next election.’’

Rizzo Jr. declined the Local’s request to be interviewed for this story.

Although Rizzo was out of office but never quite out of the spotlight. And he was never more in the spotlight than in 1980 when he erupted on camera when KYW investigative reporter Stan Bohrman approached him outside the Crefeld house walking his dog. A KYW cameraman had spotted uniformed Philly police raking leaves on the former mayor’s lawn, so his station’s “I-team” set up undercover surveillance in an unmarked van.

When Bohrman spotted Rizzo walking his dog outside the house and confronted him for comment, Rizzo let him have it.

“You’re a crumb creep lush coward,’’ insulted Rizzo, waving his finger at Bohrman while standing on Crefeld Street on an overcast November 1980 day. “You’re a lush, I can tell by looking at ya.’’ He repeatedly called the reporter a “crumb bum,” and told him to “scram.”

The exchange went on for several minutes, with the mayor threatening to singlehandedly fight the three-man crew. He grabbed Bohrman’s microphone and threatened to break it over his head and to throw him in the middle of the street. When the story aired, it went national with even the Today show picking it up. The ‘’crumb bum’’ story remains firmly entrenched as golden Philadelphia lore and also perpetually available on Youtube.

Now, after serving as the Rizzo homestead for more than four decades, the family is letting go.

“The home hasn't changed much since my dad died," Rizzo told the Inquirer.

It’s an opportunity to own a real piece of Philadelphia history.