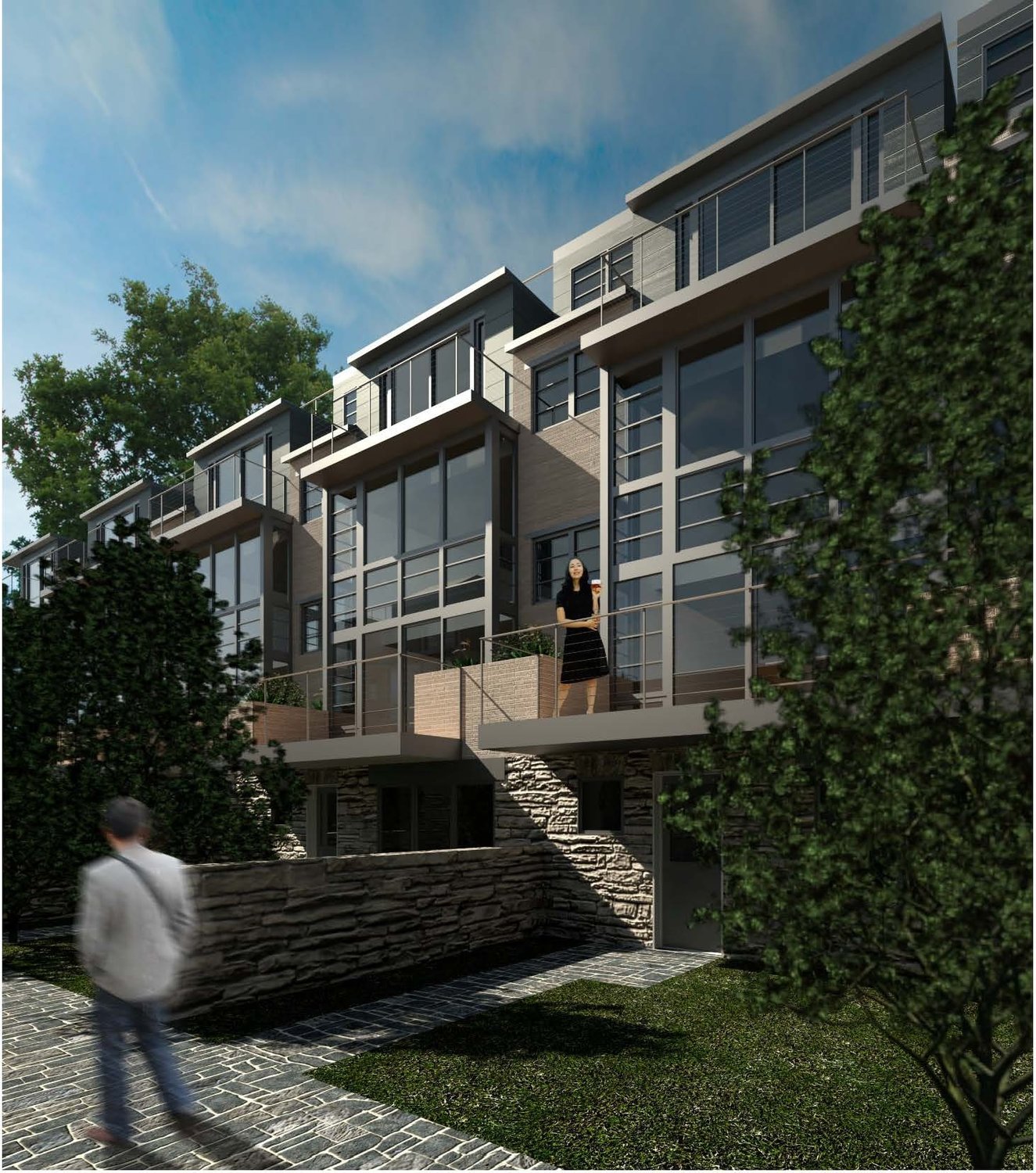 Because the property is currently zoned for commercial use and does not allow multifamily or multiple separate structures, owners E.B. O’Reilly and Associates’ requested permit was denied by the Philadelphia Department of Licenses and Inspection.  To proceed, they need a variance from the City’s Zoning Board of Adjustment (ZBA.) The ZBA, an independent board within the Department of Planning and Development, customarily defers to the relevant community association.

Larry McEwen, project designer and owner of McEwen Architects, presented renderings and answered questions, along with O’Reilly and Associates owner Henry F. O’Reilly III. McEwen is also a member of the LUPZC and abstained from decision-making on the issue.

The project would replace the two existing buildings, one on Highland Ave. and the other in the rear, with eight townhouses on the L-shaped property: six extending perpendicularly from West Highland Ave., and two behind the adjacent row of four houses. The front half of the current building on Highland Ave. was built in 1903 of locally quarried Wissahickon schist. It is a structure designated “contributing” by the Chestnut Hill Historic District, but does not hold a “significant” City Historical Commission designation, which would afford some protection. The Historic District was added to the National Register of Historic Places in 1985

McEwen explained he and O’Reilly explored adapting the existing building but found it undesirable for three reasons. First, the ground floor of the West side of the building has just one window and is two and a half feet from the property line shared with the sidewalk and driveway serving the parking lot behind Weavers Way Coop, Iron Hill Brewery and other businesses along the Avenue. As such, adding additional windows is ordinarily not permitted by City building codes, limiting natural light on the West side of the first floor of at least one hypothetical unit.

“Yes, it is a nice old building,” said McEwen, “Kind of like your flannel shirt you know you like to like to put on. It's very comfortable, and you've seen it before, but the building right across the street is a finer example of that… It's in its original condition. Whereas the existing building has been modified over time, so it's hard to know what it represents except something that's old and comfortable.”

Also because the historic building abuts the property line, any design preserving it and utilizing the current site’s driveway would place cars and pedestrians adjacent to each other in a manner deemed unacceptable. The use of a curbed sidewalk, seeking a shared use arrangement with the adjacent parking lot driveway, or other resolutions were not discussed at the meeting.

Finally, the current site does not have its own dedicated stormwater drain, and the City Water Department, as part of its permitting process, is requiring the project to add an extension from the Germantown Ave. drain at its own cost, estimated to be between $100,000 and $200,000. Although specific numbers were not discussed, O’Reilly said this required constructing as many and as large townhouses as possible to  amortize the additional cost and keep the project “attractive” as a development opportunity.

Some debate was had over the merits of preserving the existing Wissahickon schist structure. One LUPZC member, Andrew Moroz, advocated for the preservation of buildings exemplifying Chestnut Hill’s signature style.

“What I'm concerned with,” he said, “is the idea that you can demolish buildings that contribute to the historic district in order to create new development. Should there not be a higher bar for that kind of redevelopment, where you can't assume a lot in a historic district is vacant? That's always a rare thing, so in every case it seems to require demolishing a building with some history, some contribution.”

Richard Snowden, President of Bowman Properties, which owns a number of historic residential and commercial properties along the Avenue and in Chestnut Hill, cautioned it would set a precedent not conducive to historic preservation in the neighborhood. Other near neighbors also regretted losing the building.

“There are 8,700 buildings in Chestnut Hill, of which 80% are contributing or significant,” he said. “Is it the finest example we have? No. But it is part of the backdrop that gives us the quality of the community, and I think that is what’s being lost here. This isn’t just one building, [and] it’s kind of a slippery slope. I’ll give you an example: My company owns 90 buildings in the Business District, of which five or six are ‘contributing,’ and with the zoning changes that are coming to the City of Philadelphia, that means dozens of them will be eligible for this kind of redevelopment.”

Concerns were also raised about the height of the townhouses, which reach the code limit of 38 feet – 39 inches taller than the adjacent row homes and not including roof deck pilot houses. Some residents found the Highland Ave. façade imposing, felt the townhouses presented an exclusive “gated community” feel, or were skeptical townhouse guests would use the garage parking instead of street parking. The proposal also has no centralized depository or collection plan for waste and would add 16 receptacles to Highland Ave. on trash day.

Jeff Krieger, the part-owner of three of the adjacent townhouses also expressed concern about the length of the construction project, estimated at 14 to 16 months, and disturbance to his tenants, as well as the impact on natural light.

“These [units] are in our backyards,” he said, “and the existing building is 24 feet tall. What's proposed is 38 [feet] to the roofline, then there's a pilot house. So, essentially, these are five-story buildings, and they're substantially higher than the apartment building that's back there now, and we are concerned about the sun angles, the daylight, that would fall into the backs of our buildings, and the gardens and patios that we have back there.”

In response to comments suggesting plans to demolish the historic structure and maximize density, O’Reilly said the current building no longer suits the needs of his business, and his intent is to move it but continue to live in the neighborhood, in walking distance to the Avenue, and not to “monopolize or monetize” the property.

Ultimately, the CHCA has a policy of promoting residential development off Germantown Avenue, and voted four votes to one to endorse the zoning variance before the CHCA Development Review Committee (DRC,) provided the proponents explore modifications to the façades on Highland Ave. and facing its neighbors’ back yards, such as eliminating or setting back the top floor. However, support for the variance is not conditional on the institution of these options.

The CHCA’s Development Review Committee was expected to review the 30 W. Highland Ave. proposal on Tuesday, Feb. 16, which falls after the Local goes to press. Decisions of that committee will be made as a recommendation to the CHCA Board of Directors, which will have the final say on the matter in a meeting on Feb. 25.