Looking for a middle ground on school funding

This past weekend, the Philadelphia Inquirer ran a series of opinions looking into the city’s charter schools. The law paving the way to the establishment of charter schools – independently run …

Looking for a middle ground on school funding 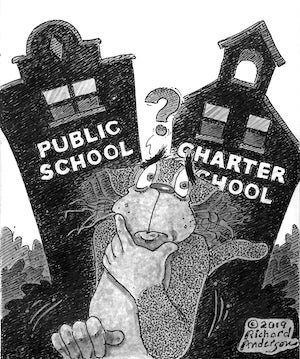 This past weekend, the Philadelphia Inquirer ran a series of opinions looking into the city’s charter schools. The law paving the way to the establishment of charter schools – independently run but publicly funded schools that operate under a charter with the school district – went into effect 22 years ago. The series “took the temperature” of charter schools today.

In an op-ed by Kate Shaw and David Lapp of the Philadelphia-based Research for Action, a nonprofit education research organization, the pair detailed how much charter school spending has risen in the state. Between 2008 and 2018, charter school spending by the district increased from 12.6 percent of its budget to 30.7 percent. The number of students enrolled in that period doubled from 37,432 to 75,541.

Harrisburg, Shaw and Lapp wrote, had failed Philadelphia schools by increasing the choices parents had but failing to provide the adequate funding.

“Pennsylvania used to provide over $219 million per year to partially offset this impact,” wrote Shaw and Lapp. “But in 2011, the state eliminated that line item and walked away from its obligation … The impact has essentially pitted charter schools against the district as charter growth drains resources and it struggles to make ends meet.”

As Shaw and Lapp note, charter support remains strong in the city. It’s easy to understand why, as parents look for alternatives to schools they deem unsafe and unsuccessful. This week was the deadline for charter school applications in the city. ABC News reported that nearly 30,000 families in the city submitted applications for more than 110,000 children. That’s more than half of the roughly 203,000 children in the district.

The answer for Philadelphia families would not be to simply eliminate charter schools, but to find a way to fund them and, in turn, restore funding for the city’s public schools.

Local State Rep. Chris Rabb convened a meeting last week of the House Democratic Policy Committee in Philadelphia to talk about funding issues. At that meeting, committee members and school district superintendents discussed the state’s poor record of funding school districts. A suit brought by underfunded school districts against the state isn’t scheduled to begin until 2020, a wait that is too long for many who feel the current situation represents a crisis.

Rabb has proposed a state bill that would push all of the state’s $6 billion in education funding through a formula that accounts for the burden on districts that serve poor and other disadvantaged children, a proposal that Gov. Tom Wolf has endorsed. But even Rabb admitted that more money was necessary.

“The 800-pound gorilla in the room is that we need significantly more money,” he told Public School Notebook last week. “We are not getting significant revenues to support a 21st century educational system.”

There should be a middle ground – one that can continue to give parents the choices they want but one that does not funnel money away from a school district serving more than 200,000 kids with only seven certified librarians districtwide. The city’s school children need that solution now.

Our policies for letters and guest opinions