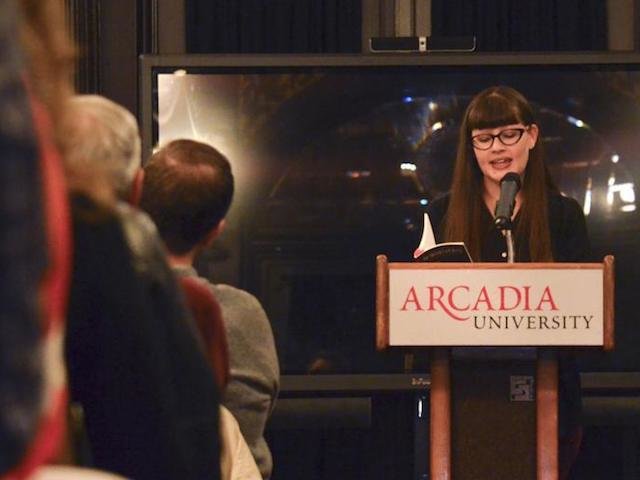 Genevieve Betts, 37, who teaches poetry for Arcadia University’s “low residency” MFA program in creative writing in Glenside, must be doing something right. Quite a few of her recently graduated students are already published poets — Fran Daulerio, Michelle Reale and Kailey Tedesco, and another one, Chad Frame, was the 2017 poet laureate of Montgomery County.

Betts is also the author of a stunning book of poetry, “An Unwalled City” (Prolific Press, $14.95), about which Sarah Vap, author of “End of the Sentimental Journey,” wrote in a published review, “This book will make you laugh aloud, but it will also make you feel tender about all junky, ugly, poor, poisonous, regular and vulnerable things of this world that Betts so tenderly notices.”

Betts was inspired by poetry as a child in Tempe, Arizona, when she found an old copy of Walt Whitman’s legendary “Leaves of Grass” in a book store. “That spurred me on,” she recalled. “I was just a sixth grader, but I knew that’s what I wanted to do with my life.

“I fell in love with the works of e.e. cummings and Ogden Nash and later with Marianne Moore, Gertrude Stein, William Carlos Williams, T.S. Eliot, Ezra Pound, Adrienne Rich and Russell Edson’s absurdist prose poems, among others. As far as my own work is concerned, there is almost no money (to be made) in poetry. Usually they pay you in copies of the magazine, but I love it, so I automatically do it.”

Genevieve earned an MFA in creative writing from Arizona State University, where she met her husband-to-be, David LeBard, who was finishing up his Ph.D. in chemistry. They came to Philadelphia because the University of Pennsylvania offered David post-doctoral work. Last week we asked her the following questions:

“I would say that my writing style comes naturally to me. I tend to write poems that present some kind of narrative or encapsulate an idea. My focus is to write with clarity and crispness of language and image. Although poems are often thought of as puzzles that readers must piece together to understand, that’s not always the case. I write to be understood, and I think that’s true of many contemporary poets.” 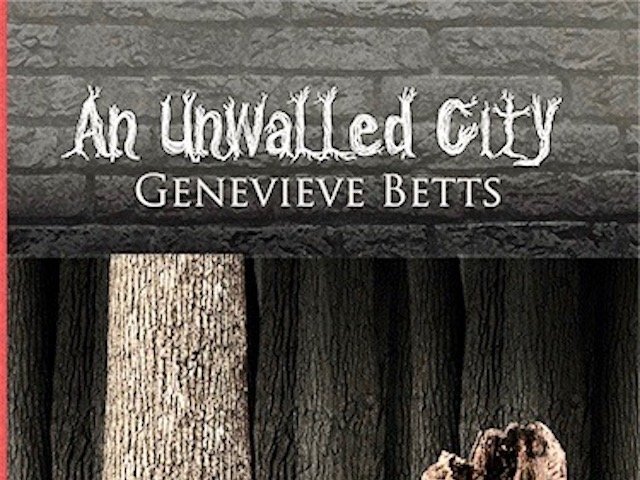 Betts’ book, “An Unwalled City,” whose main themes are childhood and motherhood, is filled with rich and iconic imagery, humor and reflection that can be enjoyed by those who have not spent years in graduate school courses.[/caption]

“I don’t think I’m preoccupied with death, but I do find myself attracted to the macabre. As a kid, I read a lot of Poe and Plath. Maybe that’s affected my choice of content. Like many people, I try not to think about death too much, but for some reason, death keeps popping up when I write. It’s one of those underlying fears and mysteries that can’t be resolved or fully understood, and that is fascinating to me.”

“Well, I like my old copy of Walt Whitman’s “Leaves of Grass.” It’s not a first edition and is not in mint condition, but it has many earlier versions of Whitman’s poems. (He worked on and revised the poems in this book over his lifetime.) I like to compare them to his final versions of these poems to reveal his revision choices.”

“Yes. Since my first book, I have been publishing work in literary journals. My most recent work is in Calamus Journal, New Mexico Review, The Tishman Review and Hotel Amerika … I’m actually putting together a second collection of poems which I hope will be ready for publication soon!”

“Well, when I lived in Brooklyn, I harbored a secret dream to be a train conductor. I was so fascinated by the subway system. A whole other world exists underground — performers, stores, people selling churros from carts, sleepers, beggars and everyone shoving their way onto train cars. It’s never boring down there! It does smell bad, though, and there are often emergencies. I actually had to call 911 for my first time because a woman was having a seizure.”

“The hardest thing I’ve had to do in life is reconcile my career and motherhood. I never planned on having children and always imagined I’d be working like crazy. I grew up in the ‘80s and ‘90s, when kids were told they could be anything they wanted to be when they grew up (if they tried hard enough), and I’ve always been a feminist. It took some time, but ... I’ve found a great balance between my dream job and raising two children, but it took years of navigating the challenges of work and kids to find that balance.”

“I was raised to never give up. I witnessed my parents facing challenge after challenge. My dad was a miner in a small town in Arizona, but the mines shut down, and we had to move to the Phoenix area. At one time, my parents were both working multiple jobs to get by. My mom worked after-school care and as a cashier at a grocery store and fabric shop. My dad was working as a test driver, cashier at a grocery store and sometimes drove trucks for UPS. Tenacity is necessary as a writer because writers are constantly faced with rejection. If you keep working on your craft and submitting to publications, you can be a writer. It just takes some talent, persistence and some seriously thick skin.”