Kristen Bailey (as Gregor) is seen in Quintessence Theater’s stunning production of Franz Kafka’s “Metamorphosis,” one of the most memorable stories in all of literature. Gregor wakes up one … 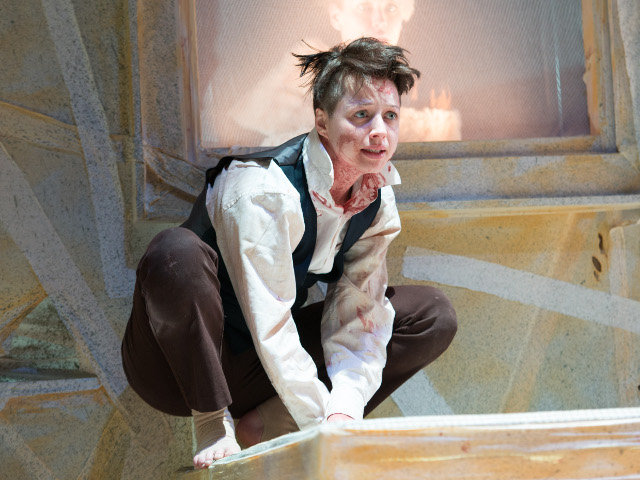 Kristen Bailey (as Gregor) is seen in Quintessence Theater’s stunning production of Franz Kafka’s “Metamorphosis,” one of the most memorable stories in all of literature. Gregor wakes up one morning and finds he has been turned into a giant insect. (Photo by Shawn May)[/caption]

Breathtaking imagination went into producing "Metamorphosis,” which opened last week at Quintessence Theater in Mt. Airy. With a running time of just over one hour, the show is a spectacle of movement, sight and sound that brings Franz Kafka's seminal story to life.

Wasting no time, the key event takes place right at the start. Gregor wakes up in the morning to discover he has changed into a giant insect! We see the poor bug trying to get off its back as three interlocking actors flail the air with their legs.

Rebecca Wright directs her first Quintessence production (Carolyn Fast, stage manager). She uses the adaptation of Steven Berkoff and draws on the talents of a wonderful team of designers to make the Kafka classic stageworthy.

The set design is evocative (Colin McIlvaine). Beige bandages wrap up everything in the home, giving it the dusty aura of an insect's lair. Two chairs are suspended several feet off the floor as though held by tentacles to the sticky wall of a nest. The whole family seems unconsciously close to living in an imminent insect world.

Kristen Bailey is nimble in the star role, and she needs to be. Accepting the limitations of his new body, Gregor hides in dark places, then slinks out to crawl up and down the walls. Yet he tries to retain his human side, fighting furiously to keep a wall portrait of a lady in furs.

Gracie Martin plays his sister Greta. She alone helps Gregor, exploring what the bug likes to eat and cleaning his room. But as in most families, there are limits to love. Greta is the one who finally insists that the family abandon Gregor. She then goes through her own metamorphosis, changing from a young girl into a woman.

When the outside world intrudes, it is usually about money. The business clerk insists that Gregor return to work. Later, the desperate family takes in lodgers (Julia Frey, Lee Minora and Alan Brincks), richly comical with their stylized movements and quaint clothes (costumes, Katherine Fritz).

Special effects flesh out this remarkable show. Changes in light get you to feel the family is passing through an ordeal lasting many nights and days (lighting, Maria Shaplin). Ticking clocks remind you that metamorphosis is bound up in time, and dramatic musical chords heighten the story's magical uncertainty (sound, Adriano Shaplin).

Some see Kafka's "Metamorphosis" as the forerunner of absurdism in literature. I think "magical realism" is a better pick for the heir. Gregor's sea change is more supernatural than absurd and serves to magnify the mystery of family relations. His catastrophe energizes those around him, and a strange hopefulness begins to emerge.

Quintessence is located at 7137 Germantown Ave.  "Metamorphosis" will run through March 1. Tickets available online at www.quintessencetheatre.org or at the door.