In the Inter-Ac, a breakout year for GA golf

The 2021 season wrapped up last Wednesday, October 27, with the league's individual championships, which were held on the par-71 course at Bluestone Country Club in Blue Bell.

In the Inter-Ac, a breakout year for GA golf 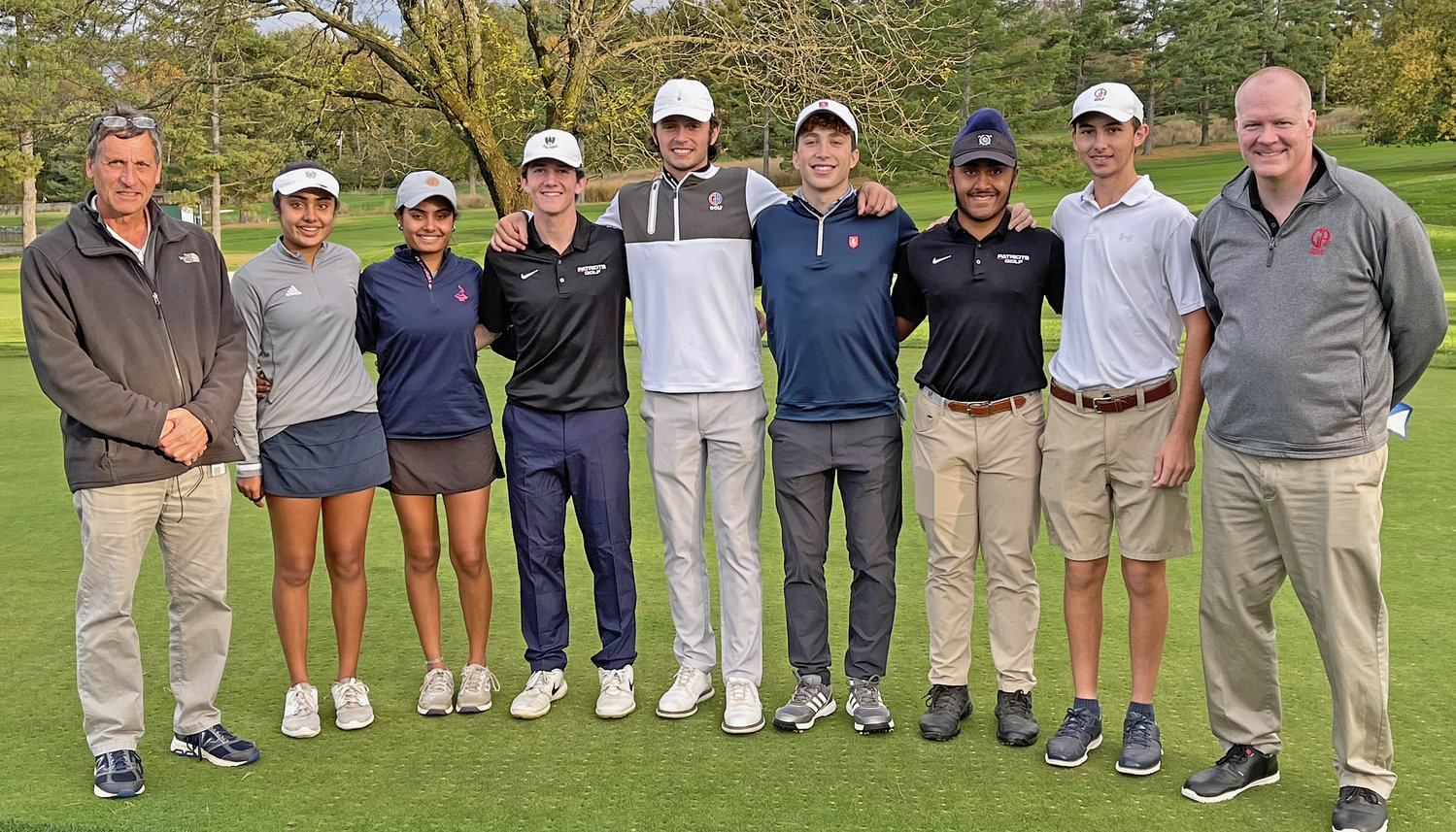 The seven Germantown Academy golfers who qualified for the Inter-Ac League Individual Championships are pictured with their coaches on the day of the event. The Patriots won the 2021 team championship in the league.
Tom Utescher
Posted Monday, November 1, 2021 8:00 am
by Tom Utescher

Back in the pre-COVID 2019 Inter-Ac League golf season, Germantown Academy's Luke Marvin won the league's individual championship tournament, but the team champion, as in many years past, came from the Main Line.

While the Coronavirus quashed the 2020 season, a talented and deep GA team was taking shape around Marvin, who is now a senior. This fall the league Inter-Ac once again held its six official team events (each schools hosts one), and the Patriots won the first four and finished second to Malvern Prep in the last two, earning the team title for 2021.

In the recent past Penn Charter produced several individual league champions, but neither the Quakers, Patriots nor the Springside Chestnut Hill Blue Devils had triumphed as a team.

"This is the first time since we went to this format that a team from this side of the [Schuylkill] river has won," noted GA head coach Dave Martin.

The Inter-Ac adapted the current arrangement 11 years ago, the same year that Martin took the helm of the Germantown Academy squad. For decades before that, he had coached boys' lacrosse at GA. In his current role, he oversees the Patriot golfers along with assistant coach Jason Straub.

The 2021 season wrapped up last Wednesday, October 27, with the league's individual championships, which were held on the par-71 course at Bluestone Country Club in Blue Bell. Bluestone is GA's home course for matches, although the team practices at three other locations, as well.

At the end of Wednesday's championship round, GA's Will Irons was tied atop the leaderboard with fellow sophomore Hunter Stetson of Episcopal Academy. A one-hole tiebreaker failed to dissolve the deadlock, so the two kept at it until Stetson prevailed by one stroke.

Players from the league schools qualified for the tournament according to the sum of their efforts in the six regular-season league outings. In addition, one player could be selected by each team's coach.

Two players from Penn Charter appeared at Bluestone last week, juniors (and team captains) Jake Dittus and Holden Hummel. Hummel finished in a tie for 17th place with a score of 86, while Dittus was 20th with an 88. The player representing Springside Chestnut Hill Academy was senior Zach Shapiro, who placed 24th with a score of 97.

Golfing talent seems to run in some families, and the Germantown Academy roster includes three siblings. The eldest, Serena Bagga, is a junior, her brother Ajeet is a sophomore, and her sister Kiran is a freshman. They were introduced to the game by their parents, who play recreationally.

Although fall golf in the Inter-Ac is traditionally a boys' sport, GA has fielded a co-ed team for many years. Two other co-educational schools in the league, SCH and Episcopal, field girls' teams in the spring. That is also when all-girls league members Agnes Irwin, Baldwin, and Notre Dame play.

At the Inter-Ac's last week, Episcopal's Jack Yearley finished alone in third place with a score of 78, but after him there was a six-way tie for fourth place among athletes who each produced a round of 79. Included in this group were GA's Kiran Bagga and Ajeet Bagga. Kiran, the freshman, was the youngest player to finish with a score this high except for Malvern Prep eighth-grader Davis Conaway.

Two other GA players were involved in two-way ties, Marvin for 10th place with an 81, and fellow senior Seth Roth for 12th place with an 82. Among the three players tying for 14th with scores of 83 were Serena Bagga and GA senior Jack Luviano.

Reflecting upon his 2021 Patriots, Coach Martin said, "They're very good players, they're great people, and they've been a joy to work with. It's really a good group of people who enjoy each other's company.

"We had players from all four [upper school] classes," he added, "and in the league events that we won, we had 10 different players contribute to our scores."

Martin noted that this fall 38 students have been involved in the GA program, the most ever. Success breeds success, they say, so interest in Patriots golf should remain high.