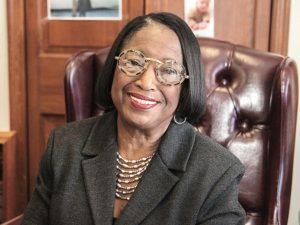 The way former City Councilwoman Marion Tasco remembers it, she first met 200th District Rep. Chris Rabb at a 2016 function in Jenkintown prior to the presidential election. The meeting was to discuss working for Hillary Clinton. Rabb was a candidate at the time.

“He told me who he was, and I introduced myself and asked him to give me a call,” said Tasco, now the Democratic leader of the 50th Ward. “I never heard from him.”

That Rabb hasn’t reached out to her is part of a litany of complaints Tasco has about the way he has conducted himself as a state representative that led her to back Melissa Scott to run against him for the 200th seat. In addition to ignoring her invitation, Tasco said she was hurt that he referred to her as part of “a Northwest machine.” And she said he has also failed to bring important resources back to the district.

But the most egregious issue may be the fact that he moved the district office from Wadsworth Avenue, the business corridor in the heart of the 50th Ward, to Germantown Avenue in Mt. Airy.

“That office had been on Wadsworth Avenue since John White was a state rep in 1978,” Tasco said. “He took from this community its most important thing.”

Rabb does not see things the same way. While the office may have moved, he has maintained a presence in the 50th

“I moved the district office to the center of the district [in Mt. Airy] and invested in a high-tech, modern venue to provide high quality constituent services,” Rabb said. “I’ve also opened up three satellite offices, the first of which is at the Wadsworth Library on the same block vacated only recently by Councilwoman Cherelle Parker. The other two are at Pleasant Rec Center and the West Oak Lane Library.”

While Rabb isn’t running against Tasco, she remains a powerful opponent. Tasco has been a force in Northwest Philadelphia politics for more than a generation. She was a city councilwoman representing the 9th District, a seat now held by Cherelle Parker, for 27 years. She retired in 2015. Parker, a longtime ally of Tasco’s was endorsed by the former councilwoman to take her seat. Scott by extension worked in Parker’s office.

The 200th District is relatively small, containing the 9th, the 22nd and the 50th wards. According to figures compiled by the Committee of 70, the city’s nonpartisan election watchdog, there are 42,419 Democratic voters in the district.

Rabb cast himself as an outsider when he first ran for the district in 2016, and, although he has the backing of the 9th ward – 23 committee people voted for him, one against and one abstained – he said he wasn’t given the same opportunity in the 22nd ward or the 50th.

The 22nd ward invited him to speak, he said, and gave him equal time as Scott, but declined to support either candidate. Attempts to reach 22nd Ward leader Ron Couser for comment were not successful. Several committee people who spoke with the Local off the record said they believed Couser would not seek reelection to lead the ward. Councilwoman Bass, a committeeperson in the 22nd, notably has endorsed Rabb.

“Marian Tasco did not invite me to address her fellow committee people as she did other candidates running for various positions this election cycle,” he said. “Councilwoman Tasco decides who her ward endorses; the 50th Ward endorsed former 50th Ward committeeperson, Melissa Scott, whom she and current City Councilwoman Cherelle Parker have groomed to challenge me.”

Tasco did not technically dispute the fact that she didn’t invite Rabb, but she said he was extended an invitation by other committee people to the meeting. He was told the time to attend, but he never showed up, Tasco said.

“The 50th ward is always open to everyone,” Tasco said. “I’m always available. He has never reached out to me. He’s the moving target, not me.”

Tasco said her committee votes to endorse candidates by ballot, not by dictate.

Rabb did not rule out speaking to Tasco in the future. He said he continues to put constituents first and is proud of taking an independent course, noting that he has a good working relationship with other Northwest area politicians, including State Senator Art Haywood, Councilwoman Cindy Bass and US. Rep. Dwight Evans among others.*

“I have not had the pleasure of seeing Mrs. Tasco at any of the many events my office has held in the community, nor at any of my offices,” Rabb said. “However, from day one, I have promoted Councilwoman Parker’s events and have instructed my staff to work with hers whenever possible. I am proud of the strong relationship I have with many fellow public servants.”

Both appear to be waiting for the other to reach out. After the primary on May 15, one of them may have to give in.

Tomorrow: We will publish two in depth interviews with both Rep. Chris Rabb and his opponent, Melissa Scott.

*Editor's Note: The original version of this story erroneously claimed Chris Rabb had "the support of" both U.S. Rep. Dwight Evans and State Sen. Art Haywood when the the original language Rabb used was "a good working relationship with." Evans and Haywood have not endorsed Rabb in the upcoming primary. The error in understanding was mine.