'I am literally working through the tears!': Since 1994, great homemade Persian food at Shundeez

Maurice is seen at his stand in the market next to a photo of himself taken shortly after he opened the business in 1994. His business is the second oldest in the market, eclipsed only by Ranck’s …

'I am literally working through the tears!': Since 1994, great homemade Persian food at Shundeez 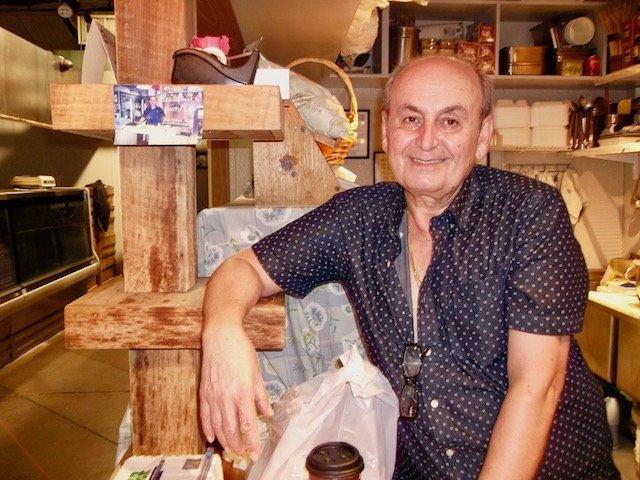 Maurice is seen at his stand in the market next to a photo of himself taken shortly after he opened the business in 1994. His business is the second oldest in the market, eclipsed only by Ranck’s Meats. (Photos by Len Lear)[/caption]

On Dec. 16, 2007, the Philadelphia Inquirer's sometimes-brutal restaurant critic Craig LaBan wrote that Shundeez, a restaurant that was at the Top of the Hill from 2005 until 2011, where Roller's had once been and Thai Kuu is now, was “an affordable Persian grill, one of the best spots in Chestnut Hill with careful cooking and confident flavors.” LaBan gave the restaurant “two bells” but said he would have given it three bells if they had made their own breads and desserts.

“After that review came out,” said owner Maurice Lavasani, 58, who left his (and his wife Martha's) home town of Shundeez in northern Iran when the Islamic revolutionaries seized the government of Iran in 1979, “we were overbooked for a long time. We were so busy for two years that I could not really enjoy it. We would get calls from buses, trains, taxicabs, you name it. But then came the recession. I wound up losing $500,000. I made one loan after another to try to keep things going.”

In addition to the restaurant, Maurice and Martha also owned and operated a food market just a few yards from the restaurant as well as an operation in the Chestnut Hill Farmers Market (now called the Market at the Fareway). Since the Lavasanis and Maurice’s mom, Seyanouch, made almost everything from scratch for all three operations, they were busier than a bird building a nest for several new babies.

“I get up at 6:30 every morning,” Maurice told me after the restaurant opened, “and I work every day of the week from 8 a.m. to midnight. I don’t even get to see my kids.” Now only the farmers market business remains. It has been there since 1994, the second oldest vendor there after Ranck's Meats, which has been there since shortly after the market opened in 1982.

“Believe it or not, we still have customers come here who started buying from us in Lancaster and Jenkintown (two former farmers market locations where Lavasani had a stand even before relocating to Chestnut Hill in 1994). But I am the only one in this market now (in Chestnut Hill) who is all alone. Every other business here has help, but I cannot afford the help. I would like people to understand what this is like.” (Martha was once more involved in the business, but she is now a translator in federal court for non-English speakers of the Farsi, Turkish and Afghani languages.) 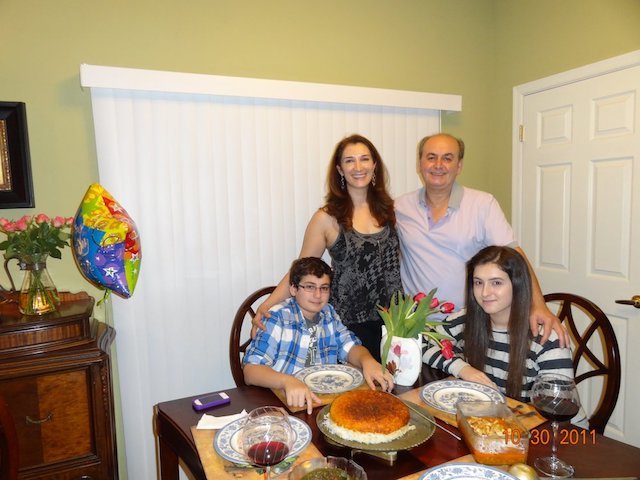 Maurice and Martha Lavasani, a professional translator in federal court, are seen at home in 2011 with their children, Alex, who is now a student at the University of Pittsburgh, and Jasmine, now a student at Ursinus College. The couple left their native Iran after the Islamic Revolution of 1979. They moved to this area in 1990 to be near Maurice’s parents, who were living in Chestnut Hill.[/caption]

The Persian and Mediterranean foods that Lavasani has been preparing from scratch and selling for decades are absolutely sublime. They are fresh enough to smack you in the face. The earnestness of the chef is palpable in these dishes, and the flavors are as genuine and inviting as the stunning flowers and plants in front of the market.

However, there are customers of the market who undoubtedly believe the vendors have a pretty easy life since the market is only open Thursday through Saturday. (It is actually half-open on Wednesdays, you might say. The doors are open, and vendors who are setting up are only too glad to sell to any customers who happen to come in, as some do every Wednesday.)

But the Thursday-through-Saturday operation is only half of the story. The vendors are not exactly sunning themselves on a Jersey beach while drinking Mango Martinis the rest of the week. “On Mondays I go to the Food Depot and food markets to buy products,” said Maurice. “I start prepping vegetables and meats. I put in at least eight hours. On Tuesdays I am cooking all day, about seven hours. Everything is homemade from scratch, so it is very time-consuming.

“On Wednesdays I set up the case, cut fresh vegetables and other foods and clean everything. I clean the vegetables at least three or four times. On Thursdays and Fridays I am here from 9 a.m. to 7:30 p.m. and on Saturdays from 8:30 a.m. to 9 p.m. People in Chestnut Hill have been very nice to me for many years, and I really appreciate it.

“But the public does not know how hard this work is. I have so much pain in my thumbs that I am literally working through the tears! And I cannot bend my knee.” (Maurice was scheduled to have surgery on both thumbs in a suburban hospital recently, but the surgeon did not show up for many hours after the scheduled time, so Maurice walked out of the hospital in frustration and anger.) 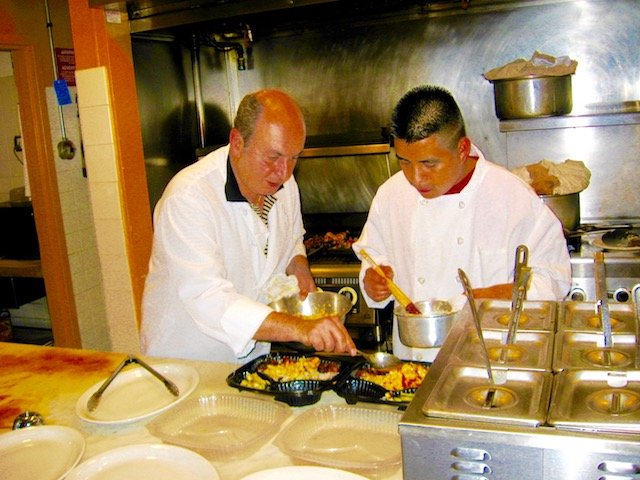 Owner/chef Maurice Lavasani (left) is seen with assistant chef Pedro Porfirio Grande at Shundeez, a Persian food BYOB at 8705 Germantown Ave. (formerly the site of Roller's) from 2005 to 2011. The restaurant got a rave review from the Philadelphia Inquirer's restaurant critic Craig LaBan in 2007, but the recession that started in 2008 eventually did the restaurant in.

“I have two kids in college (Alex at the University of Pittsburgh and Jasmine at Ursinus College), so I cannot afford to take any time off. I was here all 52 weeks last year. I never closed. We can't take a vacation because I do not have the time or money to do it.”

After leaving Iran in 1979, Maurice went to Paris, France, where he was a partner in a restaurant called Shundeez and where he also owned an interior design firm from 1979 to 1990. The couple then moved to this area to be near Maurice’s parents, who were living in Chestnut Hill.

Like so many other immigrants, the Lavasanis decided on the roller coaster ride of the food business. Martha once pointed out that many Chestnut Hill residents were familiar with Persian (Iranian) food because of the Persian Grille in Lafayette Hill. Persian food has much in common with Mediterranean food because of the geographical proximity and the intermingling of cultures.

A most unusual birthday present for Mt. Airy pastor