Wyatt Gallery, who grew up across the street from the Water Tower Recreation Center, is an acclaimed photographer who went to Haiti after the earthquake in 2010 “to show the extensive destruction … 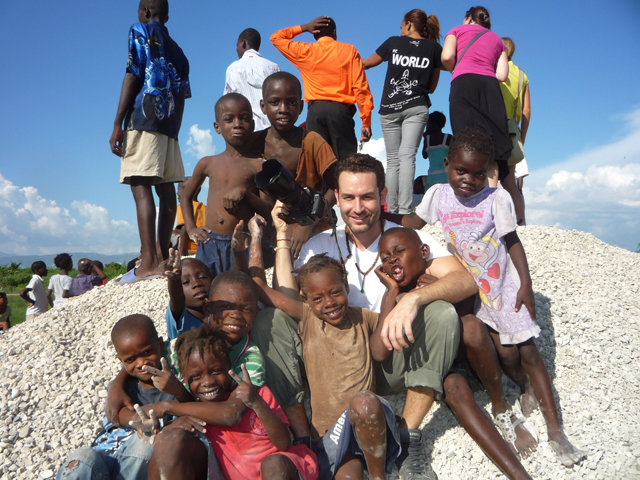 Wyatt Gallery, who grew up across the street from the Water Tower Recreation Center, is an acclaimed photographer who went to Haiti after the earthquake in 2010 “to show the extensive destruction from the disaster, but what we found within this tragedy was the uplifting spirit of the Haitian people and their sense of hope, resilience and at times, joy.”[/caption]

Wyatt Gallery (his real name; not the name of an art gallery), who turned 40 last month, grew up across the street from the Water Tower Recreation Center in Chestnut Hill in the 1980s and began studying photography as a student at William Penn Charter High School. Growing up with a Jewish mother and a Catholic-turned-Quaker father while attending a Quaker high school created a curiosity in spiritual sites and religious places, mainly born out of confusion, Wyatt said last week.

(His parents, John Andrew Gallery and Leslie Gallery-Dilworth, have both had careers in architecture in Philadelphia. They have also both run companies, taught at universities and authored books.)

But as far back as he can remember, Wyatt was always fascinated by photography. “I grew up looking at the work of master photographers on the walls of my parents' homes. They had formed a great collection around the time when I was born, when photographs cost $50-250! I still admire these masters such as Steiglitz, Paul Strand, Edward Curtis, Minor White, Imogen Cunningham...and more recently, Mitch Epstein.”

Wyatt continued studying photography in college at the NYU Tisch School. “I kept following my heart and my dreams from moment to moment,” said Wyatt, who applied for and won a grant that allowed him to travel to the Caribbean and photograph spiritual sites when he was a senior at NYU. This later led to a Fulbright Fellowship in Trinidad, which years later led to an exhibit of 36 of Wyatt's photos, “Jewish Treasures of The Caribbean,” which opened June 25 and will continue through Sept. 11 at the Gershman Y at Broad and Pine Streets.

“Jewish Treasures…” tells the little-known history of the Sephardic Jews (mostly from Spain and Portugal) of the Caribbean, as seen through remaining historic sites in Barbados, Curaçao, Jamaica, Nevis, St. Croix, St. Eustatius, St. Maarten, St. Thomas and Suriname. These communities date back to the early 1600s and are home to the oldest synagogues and Jewish cemeteries in the Western Hemisphere.

How did this unique exhibit come about? “In 2009, while living in Trinidad and Tobago,” Wyatt explained, “I was assigned by the New York Times to photograph in Aruba. On a stop over in the neighboring Dutch island of Curaçao, I came upon the impressive Mikvé Israel-Emmanuel synagogue. Built in 1732, it is the oldest synagogue in the Western Hemisphere still offering regular religious services. Little did I know that the oldest synagogues and Jewish communities in the Western Hemisphere are located in the Caribbean!

“Being Jewish myself, I found this very surprising, exciting and fascinating, so I

began to research this little-known history. Within months the New York Times

'coincidentally' assigned me to photograph in Barbados and Suriname, also

home to historic Sephardic Jewish synagogues. I began to see first-hand that

these sacred monuments and cemeteries were, and still are, in extreme danger

of extinction due to dwindling congregations and damage from natural disasters,

vandalism and the elements of time.”

So Wyatt is hoping that this unique photo exhibit, his first solo show in Philadelphia in over 15 years, will bring attention to these historic religious sites that desperately need to be restored. “After witnessing the destruction of the

Cathedral in Port au Prince, Haiti, caused by a devastating earthquake in 2010,” he explained, “I realized it is my duty to photographically document these modern day treasures of the Jewish experience. Then we may ensure that all future generations will be able to experience this exceptional story of Jewish survival and the birth of Judaism in the New World.”

But this is hardly the first time that Gallery’s work has been part of a major exhibit. His photos have been exhibited worldwide and are in major public, private and corporate collections, such as the Museum of Fine Arts Houston, The George Eastman House in Rochester, the Museum of The City of New York, New Orleans Museum of Art and American Express, among others. His work has also been featured in countless newspapers, magazines and on TV shows.

But Wyatt is no artiste reveling in art for art's sake. Since the tsunami in Southeast Asia in 2004, he has documented the aftermaths of almost every major natural disaster in the world. He takes the photos on his own, not on assignment, and then routinely uses his photographs to raise awareness and support for communities damaged by the disasters.

“After the tsunami in Southeast Asia,” Wyatt said, “I felt a calling and a duty to help in some way. I couldn’t figure out what that way was. So in January of 2005 another Philly native, photographer Kareem Black, and I traveled alone to Sri Lanka where we documented the aftermath and did what we could to help the damaged communities. This started a 10-year journey of using my photography to make a difference and support communities in need after natural disasters.”

Wyatt published his first book, “Tent Life: Haiti,” in 2011 with Umbrage Editions and donated 100% of the royalties to relief efforts. After Hurricane Sandy in 2012, he and the Foley Gallery in New York's Chelsea neighborhood organized #SANDY, an exhibition of iPhone photographs by professional photographers, that raised $21,000 for rebuilding efforts in New York City. Gallery also edited and published a book of these photographs with Daylight Books that was then featured in the exhibition, “Rising Waters,” at the Museum of The City of New York in 2014.

Wyatt is single and does not have children, but he insists that he does “look forward to a new love and having kids in the next few years.” But for now, “I pretty much live as a nomad, and generally I love it. It can be challenging, but I’m used to it, and I love experiencing new places.”

To see more of Wyatt's work, visit www.wyattgallery.com For more information on “Jewish Treasures of The Caribbean,” call 215-545-4400 or visit www.gershmany.org